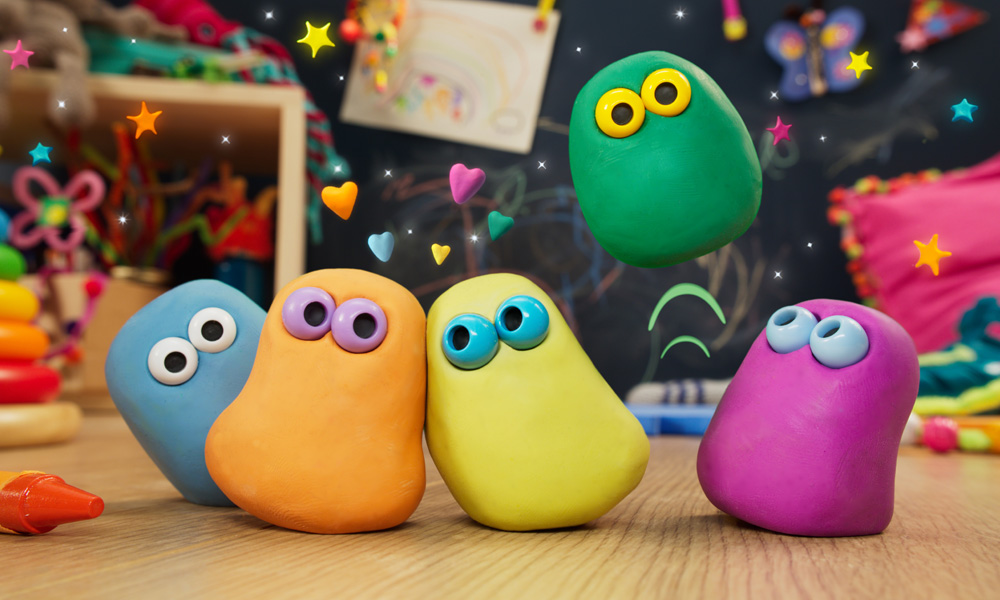 Multi-award-winning independent animation studio Aardman has greenlit a brand-new series for one- to three-year olds, The Very Small Creatures. Sky Kids has commissioned 20 x 3-minute episodes, which will be created using stop-motion animation and clay models, with the occasional graphic flourish. It is the first new series Aardman has created for pre-school children since Timmy Time, which was first broadcast in 2009.

The Very Small Creatures is about five genderless, toddler-like clay creatures who explore a child’s play area when no one’s around. In each episode, Pink, Blue, Orange, Yellow and Green explore their surroundings and, through play, learn about the world around them, each other and themselves. The themes of each episode relate to an aspect of toddlers’ lives, from learning about relationships, teamwork and empathy, to understanding each other’s differences. Whilst comedy is at the forefront of The Very Small Creatures, it is a show with a lot of heart. Characters show emotions such as jealousy and impatience, but ultimately, they are five friends who care about each other and act with kindness.

The Very Small Creatures originated back in the early ’80s as a colorful, childlike crowd which interacted with the classic Aardman character Morph. They feature in the latest series, The Epic Adventures of Morph, and have started to develop a fan following of their own, including director Lucy Izzard. Izzard was immediately drawn to The Very Small Creatures and saw the potential to develop a series inspired by her own experiences of play as a parent of young children.

“I am thrilled to have developed with Aardman this brand new stop-motion preschool series,” said Izzard. “It’s a show driven by five very cute clay creatures that act and behave like toddlers, learning about their physical world, themselves and each other. The themes for each episode relate to some aspect of toddlers’ lives with the focus on comedy and kindness. My two preschoolers have given me plenty of material to work from! I can’t wait to sit down on the sofa and show them the world they’ve inspired.”

The Very Small Creatures will be a series directorial debut for Izzard, who is an animator, director and professional illustrator. Izzard was animation director on Disney Junior’s preschool series Nina Needs to Go and has directed short films and commercials with Aardman for organisations such as NSPCC, Cats Protection and The Gates Foundation.

Alongside Izzard, Aardman’s Sarah Cox is acting as executive creative director. Helen Argo will act as executive producer, Natalie McKay as development executive and Stephanie Owen will produce the series.

Lucy Murphy, Director of Kids Content, UK & ROI at Sky, added, “We are delighted to continue our collaboration with Aardman and commission The Very Small Creatures for the youngest members of our audience. We know how much kids enjoy the gentle, giggly creatures in Morph so we knew that they deserved a show of their very own, and we are delighted with the warm, engaging world that Aardman have created for them.”

The Very Small Creatures will launch on Sky Kids (U.K.) and NOW in November 2021.