TV animation auteur Craig McCracken chats with us about the challenges and rewards of his charming new Disney Channel show, Wander Over Yonder.

If you’ve followed TV animation in the past couple of decades, then you know that every time brilliant toon master Craig McCracken pulls up his sleeves and starts working on a new show, it’s cause for celebration. The man behind two of Cartoon Network’s greatest animated shows—The PowerPuff Girls and Foster’s Home for Imaginary Friends—is back this month with a wonderful new show that he’s created for Disney Channel. 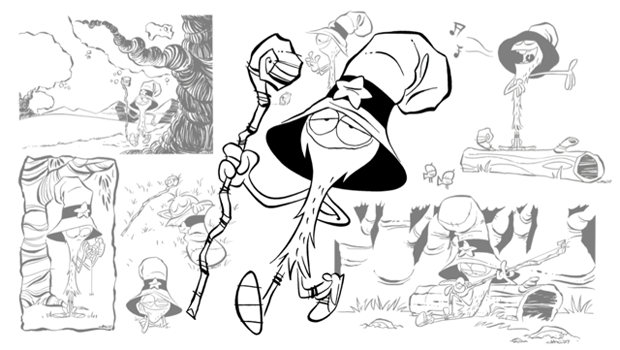 Animag: So Craig, cartoon fans are thrilled to have you back with a new series on the air. So, first up, please us about how you came up with the idea for Wander Over Yonder.

Craig McCracken: It all began with a character I started to draw in my sketchbook one day. I kept drawing this traveler guy, and I even sold a sketchbook and t-shirt at Comic-con. Back then, Lauren [Foster, Craig’s wife and fellow animator] and I were working on Foster’s Home for Imaginary Friends, and we got word that Jack McBrayer [30 Rock actor] was a big fan of our show and loved cartoons. So we ended up having lunch together. So after meeting Jack and hanging out with him, Lauren and I looked at each other and said, ‘We just met Wander!’ Since Lauren and I always collaborate together, she came on board as story editor and producer. Being at Disney also helped us attract a lot of great talent. We have Dave Thomas and Eddie Trigueros directing the show and Alex Kirwan is the art director. It’s a great group of people.

Since the show is centered on Wander’s character, what is it about him that you find fresh and inspiring?

What I love about Wander is that he is earnest, nice, friendly and really positive. There are lots of characters in the media that are dark, brooding, mean or cynical. I kind of got really tired of the tragic hero, and the idea of creating this positive character really appealed to me. I wanted to tell people about his life and adventures. 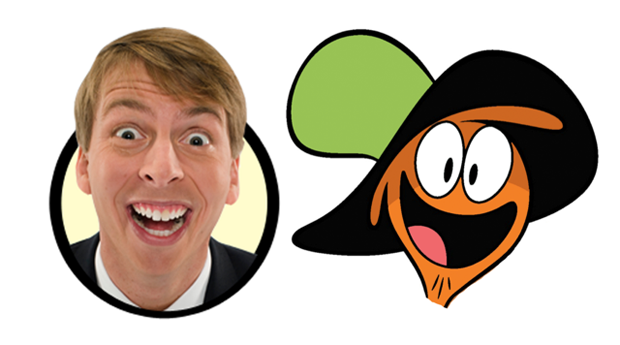 It’s funny that you mention finding the character through actor Jack McBrayer, because the character he made famous on 30 Rock, Kenneth the intern, is similar to Wander in many way.

That’s really Jack. He is actually that character. He is that guy. I would say Wander is an exaggerated, cartoony aspect of who Jack is!

Can you tell us a bit about look of the show, the visual inspirations?

I think what makes the show different is that it’s really cartoony. We wanted to go back to the classic cartoons, the Looney Tunes type of physical comedy; gag-driven, fast-paced humor was high on our list. We wanted something surreal, silly and sweet. Visually, the show is influenced by things like The Yellow Submarine and Terry Gilliam’s Monty Python animation. Then there was this show that I discovered a few year’s ago—it’s a wonderful series from Croatia, made by Studio Zagreb Film, it’s called Professor Balthazar and I just loved the look of it. 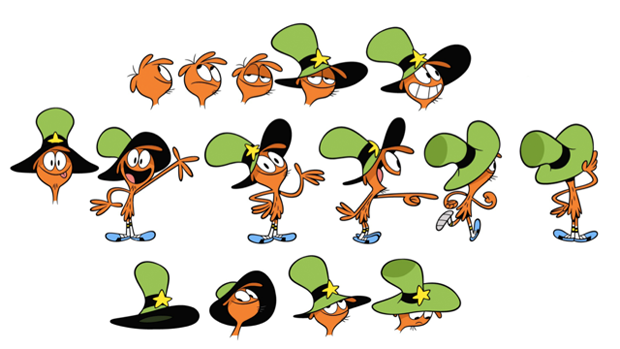 How is the animation produced?

We are doing all the preproduction, writing and the boards here at Disney TV studio here in Glendale, and then, Mercury Filmworks in [Ottawa] Canada helps us with the animation. They use Toon Boom Harmony for the digital animation. The tools they’ve developed from Harmony produce this fun, fluid animation, which is totally blowing us away. It’s amazing what we can do with Harmony as far as the level of animation goes. We wanted to bring in a lot of visual humor, because there are a lot of shows out there with characters just standing around talking to each other. We wanted a real animated cartoon, and I’m very pleased with the high level of digital animation we are getting.

Music also plays a big role in the new show. Can you tell us about the folks responsible for the unique sounds of Wander Over Yonder?

Since our show is produced at Disney, it was a given that music would play a big role. We looked everywhere to get this unique sci-fi junk band feel—banjo, kazoo, simple, silly and playful sounds that evoke the spirit of Wander. We were very lucky to find the Two Man Gentlemen Band. They’ve put out seven albums, and one man [Fuller Condon] plays an upright string bass and the other [Andy Bean] is on banjo guitar. They write a lot of funny, silly, catchy songs. They actually got their start playing subways and Central Park in New York City and gradually started having a following and put out an album. When we were auditioning for composers, they submitted their music and they really nailed it. That’s how we got our sci-fi junk band music. 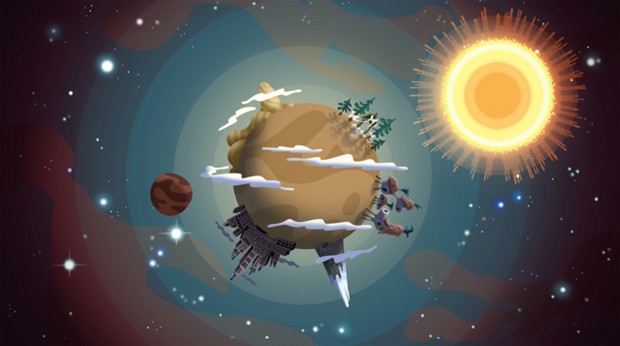 You worked at Cartoon Network since the mid-1990s until 2009. How is working at Disney Channel different from your previous experiences?

The thing about Disney TV right now is that they’ve really embraced the idea of doing creative-driven shows, trusting an artist that has a real vision for the show and really let them run with it. You can see it with Dan [Povenmire] and Swampy [Jeff Marsh] with Phineas and Ferb, and more recently with Alex Hirsch and Gravity Falls and the new Mickey Mouse shorts with Paul Ruddish. Cartoon Network had been doing that for a while, and now Disney has started to embrace that model as well. They’ve been great.

Also great are the resources they have. Because they are Disney, the money is on the screen, so they’re going to pay for a high-quality product and they really care about making it great. We have a few more check-in points here. Disney is bit more hands-on, while at Cartoon Network most of the executives were in Atlanta and we were in L.A., and there was this distance. But here at Disney, we are all in the same building and working together. They review all the scripts. We pitch every board to them. We present the animatics. We are constantly going over the show trying to make it better, step by step by step.

What would you say has been your biggest challenge on this project?

I’d say the challenge is just kind of maintaining the quality that Disney demands. We’re constantly trying to make everything better. One other difficult thing that is all my doing is that there’s no standard location on this show. In every single episode, Wander goes to a new place, a new planet, so nothing can be reused. We have only four main recurring characters. It’s great for the viewers because in each episode, Wander gets to meet some new characters, but from a production standpoint, it’s a lot of heavy-duty work for the team. 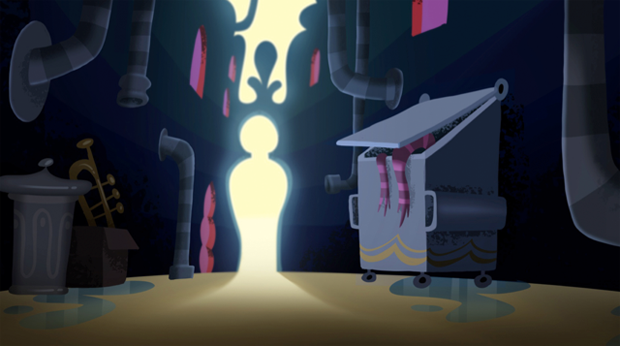 Now that Wander Over Yonder is ready to make its big splash this summer, what would you say has been the best part of the experience so far?

I’m proudest of the fact that it actually worked. We had this weird idea—there’s nothing standard about this show— everything is different. The art direction is a little weird, the main characters are kind of weird, everything is a bit new to us … I had these separate ideas that I was trying to pull together. It’s just great to see it all working … and resonating with audiences. When I pitched the show, what I wanted to focus on was that this show is not what it’s about, it’s whom it’s about … When I was a kid, I loved cartoons because of the cartoon characters. I really didn’t care what Bugs Bunny or Mickey Mouse were doing. I just loved them as characters and I wanted to watch them do anything, so I pitched this show really focusing on Wander. It’s about Wander’s personality and the way he approaches his life and the situations. And it’s about [the villain] Lord Hater and the way he responds to situations. It’s really this classic, character-driven comedy and what’s been great about it is to see that these characters are working and when we show this to people, they love Wander and they love Lord Hater as characters. That was the ultimate goal.

Which animated character influenced you most when you were growing up?

One of my favorite shows growing up was Underdog. But even before that, when I was a baby, my grandmother had made me a wooden table with all these cut-outs from magazines on it. Dead center of this table was a picture of Mickey Mouse and my mom always said that as two-year old, I would just sit there and just zone out, staring at that picture of Mickey Mouse. So I’ve been drawn to cartoon images from the earliest days, as early as I can remember: The iconography of those kinds of characters have drawn me in. So like a lot of kids, it all started with Mickey Mouse. 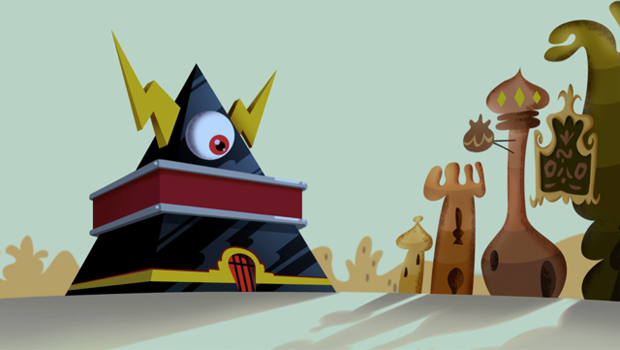 What is your take on the animation world today compared to when you started out in the business almost 20 years ago?

Overall, I think it’s great. There are a lot of good shows being made, and they’re all very different. I am from a generation that grew up on Rocky and Bullwinkle and Looney Tunes, and now you see a generation of kids who grew up on ’90s cartoons and things like The Simpsons. So when we see what Alex Hirsch is doing or the guys at Cartoon Network are doing, they have a different source material that they fed off as kids. You see some of these new shows and you can see the anime or The Simpsons influence. When I was growing up, it was hard to find a contemporary cartoon that was made during my lifetime for kids like me. I had to watch stuff from 20 years before because in late 1970s and mid 1980s, there wasn’t a lot of stuff that was made for TV. But starting out in the ’90s, you have a lot of strong individual shows that had their own points of view. Now we are seeing kids who grew up watching those shows entering the industry and doing great, inspiring work. I’m glad that the industry hasn’t stagnated. There’s some really good stuff being made.

Great. Now we come to the part where you offer some brilliant advice to students and hopeful dreamers out there who want to work in animation.

I always say that it’s really important to try to find your own voice. Don’t try to emulate anybody else. The best thing you could possibly do is figure out what it is that you love and that you want to say. Then, find the best way to say it. That’s the way to get the most unique, creative shows. You can be influenced by everybody, but you have to be true to who you are as an artist. 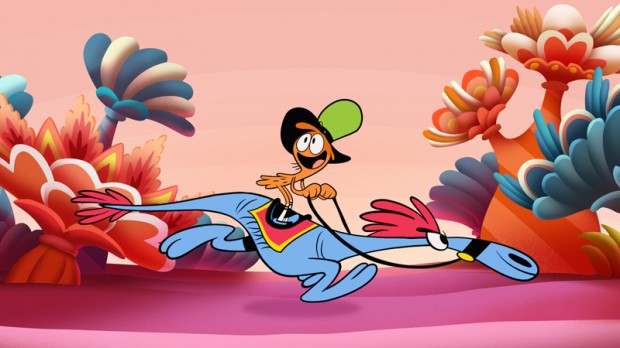 Disney Channel will air a special preview of Wander Over Yonder on August 16 at 9 p.m., following the world premiere of Phineas and Ferb: Mission Marvel. The series will officially premiere on Friday, September 13 at 9 p.m.