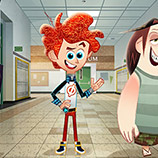 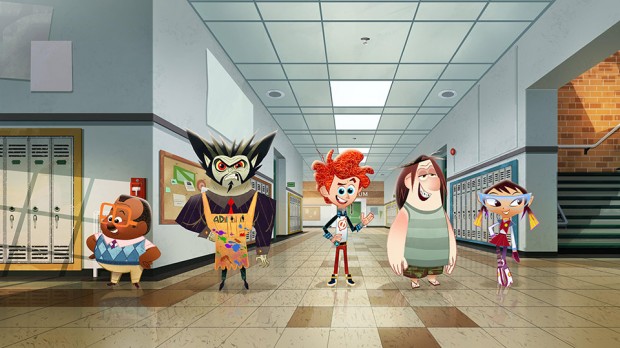 It’s long been a staple of TV shows to seek out strange new worlds on a weekly basis, but rarely has it been done in the inventive style only animation brings to it as showcased by Disney XD’s upcoming series Penn Zero: Part-Time Hero.

The series, set to premiere in February, features Penn Zero, voiced by Thomas Middleditch — a recent breakout star for his role on Mike Judge’s HBO live-action series Silicon Valley — as the titular part-time hero, who is sent into various dimensions to finish adventures other heroes have left unfinished. Joining Penn are his super-tough and highly trained sidekick Sashi, voiced by Tania Gunadi; and goofy best pal Boone, played by Adam DeVine. They face off each time out against part-time villain Rippen, voiced by Alfred Molina, and his sidekick, Larry, voiced by comic Larry Wilmore.

Created by Jared Bush and Sam J. Levine for Disney TV Animation, the series relishes putting its characters into the most bizarre genres and situations possible. A quick tour of the show’s offices in Burbank reveals dozens of episodic model sheets for ventures into places like outer space, the old west and an underwater kingdom. Even within those environments, there are interesting twists, such as an Old West mash up with dinosaurs instead of horses and cows. 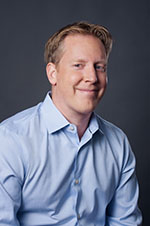 Executive producers Bush and Levine say the show — one of Disney’s big TV rollouts of 2015 — took quite a while to develop and went through multiple iterations before reaching its final form.

“I always liked the idea of someone who could jump to different genres, but I didn’t have a way to tell that story exactly in a format,” says Bush. “I pitched that as a logline to (executive director of development) Jonathan Schneider at TVA, and he said: ‘I really like it, but we need to do a lot of work on it. There’s someone you have to meet who is totally going to get this.’ And Sam and I met and it was immediately this awesome connection. And very quickly we took this rough nugget of an idea and started really beating it out figuring out who the characters were, getting into the mythology of the show.”

Levine, who also serves as supervising director on the show, says that while the world hopping is a key element and provides a lot of fun, the character interactions are equally important as the hook for getting viewers invested in the show.

“We like character-driven stories, so there’s always a character story and there’s always a fun or funny or amazing world to go to, to crack, to figure out,” says Levine. “A lot of it came down to the characters, and so it wasn’t just going to different worlds it was figuring out who they were and how they work together.”

A key part of that was the look Bush and Levine envisioned for the show. Levine says he grew up loving the look of animated films in the 1950s and 1960s — mostly the Disney work by such influential artists as Mary Blair, Eyvind Earle, Tom Oreb and Milt Kahl — but also the more abstract and textured work of studios like UPA and early Hanna-Barbera. 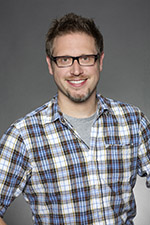 That meant giving textures like paintbrush-strokes to characters and to backgrounds and trying for that distinctive rough-line animation exemplified by the films in that period.

“I felt (that style) would support the comedy but also ground it because I think the thing about those Disney films is you really believe in it and the world and the stakes,” says Levine. “We wanted to create all these worlds that were visually graphic and exciting but visually had some stakes to them.”

“We wanted to make sure you know that if you turned it on it was something different,” says Bush. “We wanted it to not look like anything else but also to not be trying hard to not be like everything else at the same time.”

Working with Mercury Filmworks, the Ottawa, Canada-based studio animating the series, the duo came up with a look they liked and a test pilot. But figuring out how to make it work on a TV series budget and schedule was a difficult process.

“When we went to series, it was a serious question: Can we achieve that look as a series, because it’s so labor intensive?” says Bush. “We had to think about it and saw some simpler versions of what it could be and said, ‘no, we love this so much,’ and really fought for that. We made a bunch of tough choices because we thought this is a really important thing.”

Casting was another important nut to crack. Levine and Bush say they feel lucky to have found Canadian comedian, actor and writer Middleditch, whose audition fit their vision perfectly after a long search.

“We decided we wanted someone who was just naturally funny and was kind of playing the hero with a little bit of a wink to the audience, and Thomas brought that in spades,” says Bush.

DeVine also brought to Boone the kind of sensitivity they were looking for. “He’s not just a meathead best friend guy,” says Levine. “He’s got his own world and is into his own head and wants to have the fun he wants to have.”

Even the villains get in on the action. When they are in other dimensions, Rippen is the main villain and Larry is the sidekick. But when in the town of Middleburg, Rippen works as an art teacher at a school where Larry is the principal.

“(Rippen) takes everything very seriously and wants to do his job because he doesn’t want to be a part-time villain anymore; he wants to be a full-time villain, and he needs to beat Penn in one of these worlds to have that happen,” says Bush. “But Larry constantly undermines him by accident because he’s kind of a sweetheart and he really wants to do a good job and he just really wants to be Rippen’s best friend and typically screws everything up.”

Another key element to the show is the music by Ryan Shore, Levine’s friend and former next-door neighbor and nephew to Oscar-winning composer Howard Shore.

“We wanted someone who does movies because we’re going to different genres,” says Levine. “The way this show is structured is the way he likes making music, because it’s just jumping around to different worlds.”

The series aired a pre-Christmas advance episode, to which the response has been surprisingly good, Levine and Bush say.

“This is a show that needs you to see three or four episodes for you to get the whole scope of it and it’s fun to see people kind of try to figure it out from just one episode,” says Levine.

And sticking with the show will pay off for viewers, with the origin episode set as the next-to-last show of the first season.

“It was fun to write it late in the season and actually know what the characters are,” says Bush.

One thing Penn Zero’s creators are not concerned about is running out of genres or different worlds to visit. “When we first pitched the concept, we literally came up with like a hundred — and that was in one week,” says Bush. “Then we started thinking we could do little mash-ups, and then we thought we could return to these worlds and have something different happen or have a different character come in.”

“If you have the grounded characters, the genre is a backdrop,” says Levine.