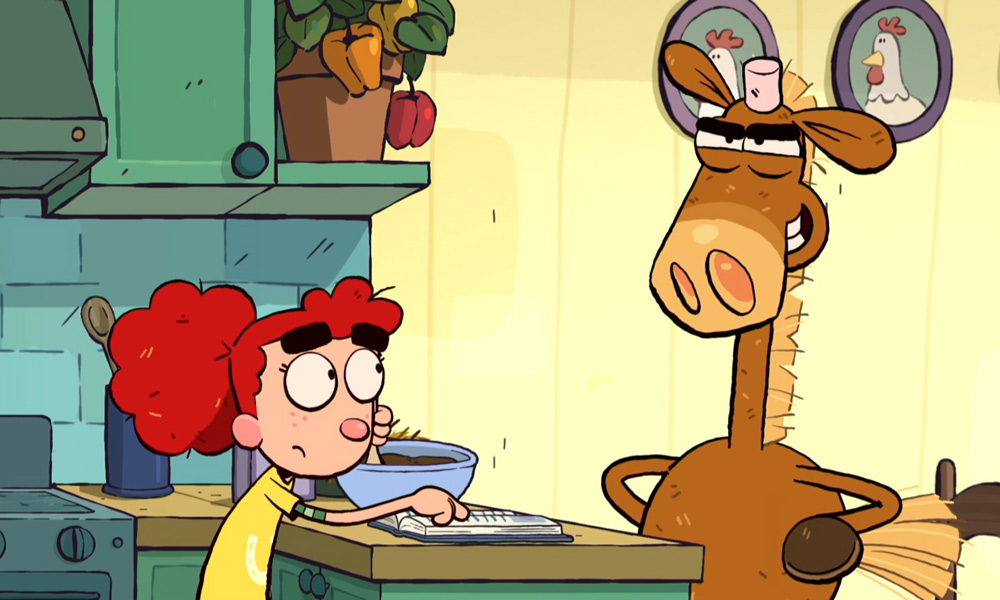 Who doesn’t want a fun, impulsive and always adventurous pony in their life? Annie (voiced by Jessica DiCicco), the bright-eyed girl in the center of Nickelodeon’s new animated series It’s Pony, certainly knows that her life is so much better with her best friend, Pony (Josh Zuckerman) — but it also makes it more complicated because they live in a city! The new show also features the voices of Abe Benrubi, India de Beaufort, Kal Penn, Bobby Moynihan, Rosario Dawson, Mark Feuerstein and Megan Hilty.

It’s Pony was created by animation veteran Ant Blades of London-based Birdbox Studio. “I was trying to think of a good idea for a series and wanted it to be relatable and simple,” he tells us. “I was looking for an idea that had scope for a lot of craziness, but also room for heart and charm. A girl trying to look after her pony in the city sprang to mind. Especially if it wasn’t that easy. How would you cope with a horse in an elevator?” 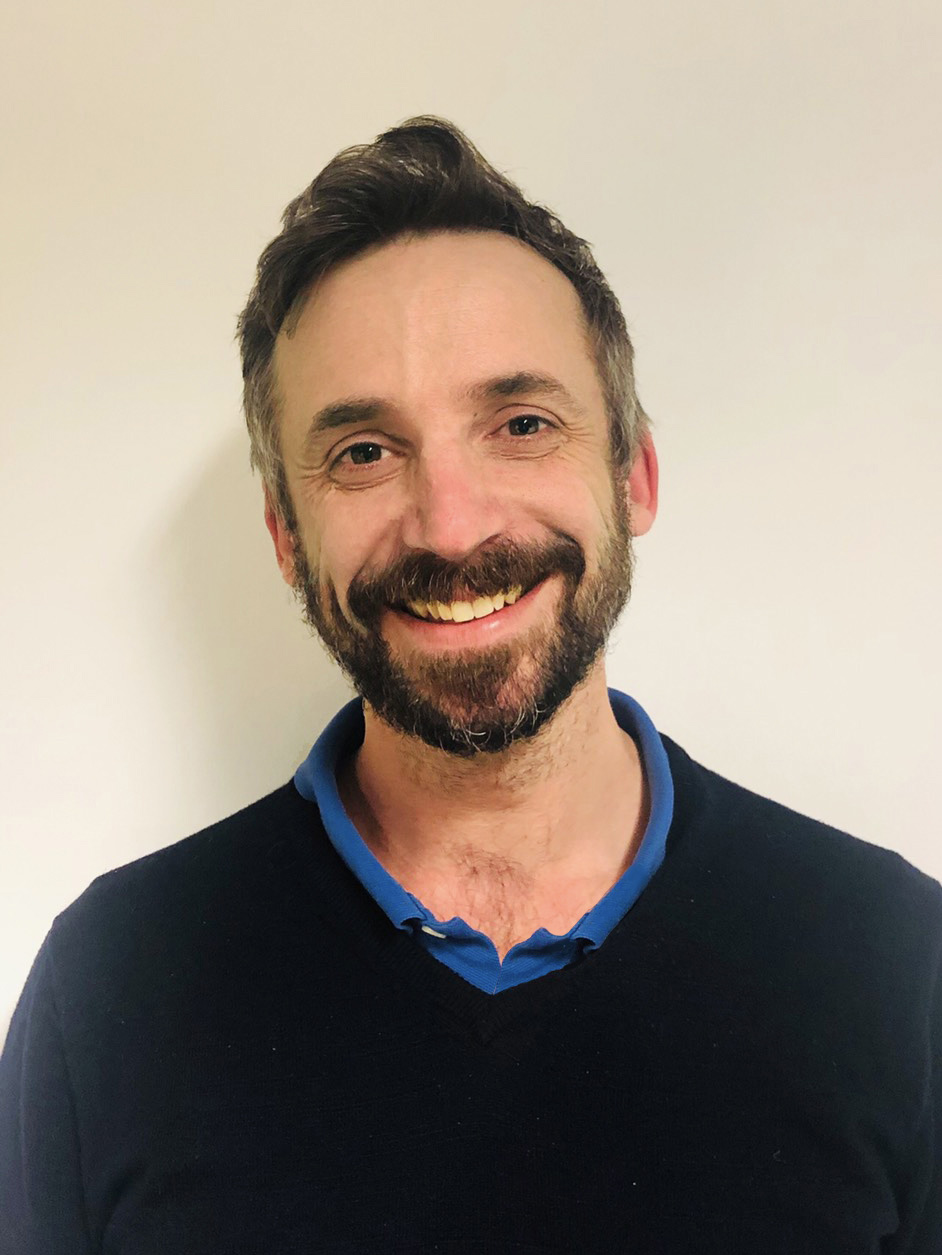 Blades came up with the first sketches for the pilot back in 2013 for Nickelodeon International Animated Shorts call out. “That seems like a long time ago now,” he notes. “It hasn’t been solid since then, though. Step by step to where it is now.

The 2D animated series is produced in London at Blue Zoo studio, home of Paddington, Numberblocks and Digby Dragon. A team of about 70 people work on the series, and the animators use Toon Boom Harmony to produce it. “The aim was to create a visually unique style to try and make it feel more hand drawn, to steer away from some more common styles and push towards something that felt more tactile and rough,” notes Blades. “Pony himself benefits from line work that’s more untidy and energetic.”

The creator says he loves Pony, but he thinks the show is the most relatable when we, as viewers, are put into Annie’s shoes. “Pony’s a horse… of course, it’s not easy. I love them most, not when they’re acting like ‘best buds forever’, but when she’s pushing his nose out of her cereal.”

Before diving into the world of Annie and Pony, Blades had been directing ads, idents and shorts at Birdbox for the past nine years. “The work was varied and allowed me to jump from project to project, which keeps things interesting for me,” he says. “I’ve always enjoyed making shorts and, if possible, making people laugh. One of the biggest challenges for me is transforming from a short-form guy into a longer-form guy, and adapting to the schedules and teams that come along with that.” 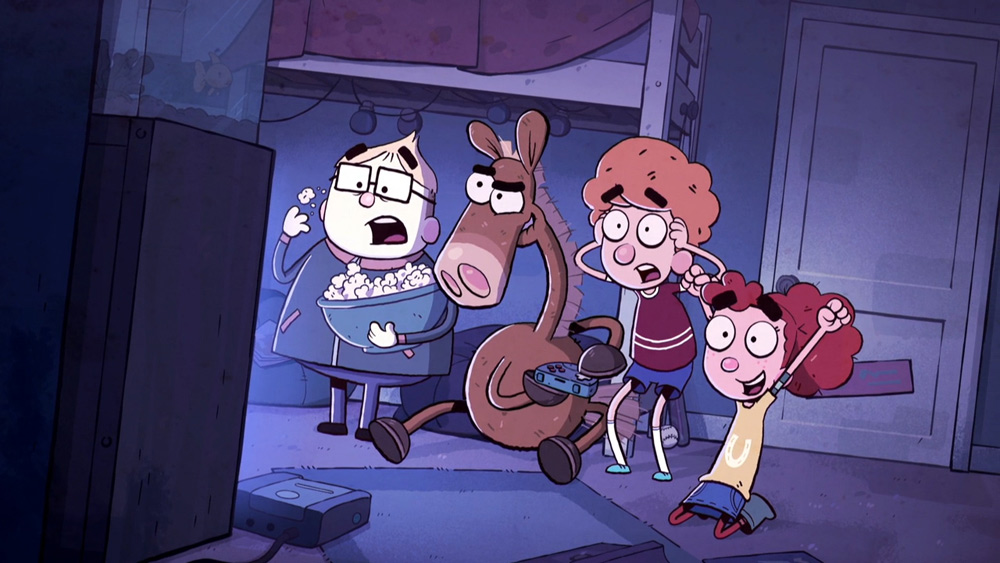 Blades actually started off studying civil engineering, because he didn’t realize that animation could be a career. “I’d always loved comic strips and cartoons, but thought I should get a ‘proper’ job. While studying though, I managed to get a cartoon strip in a national paper and that gave the confidence that I should try cartooning and animation professionally. I watched a lot of TV cartoons, but what really inspired me was the world of comic strips. Bill Watterson’s Calvin and Hobbes was huge for me. I remember reading a friend’s collection and being totally lost in the world. And it’s such a lovely world.”

He says he also watched every animated movie he could find. “The first one that really got me was Pixar’s Monsters, Inc., which is still my favorite, and has a huge heart just like Calvin and Hobbes. So maybe that’s what gets me.”

Now that he has seen his clever idea come to animated life after so many years of work and development, we had to ask him to dispense some valuable advice, right? And of course, he obliges. “There are so many platforms out there to be noticed now,” says Blades. “If you love making things move, then try and regularly put stuff out there. Offering advice is hard! Work hard? Try and keep the passion? Step away at times, so you remember what you love about animation in the first place!”

It’s Pony premieres on Nickelodeon in the U.S. on Saturday, January 18. The show will bow internationally in April. 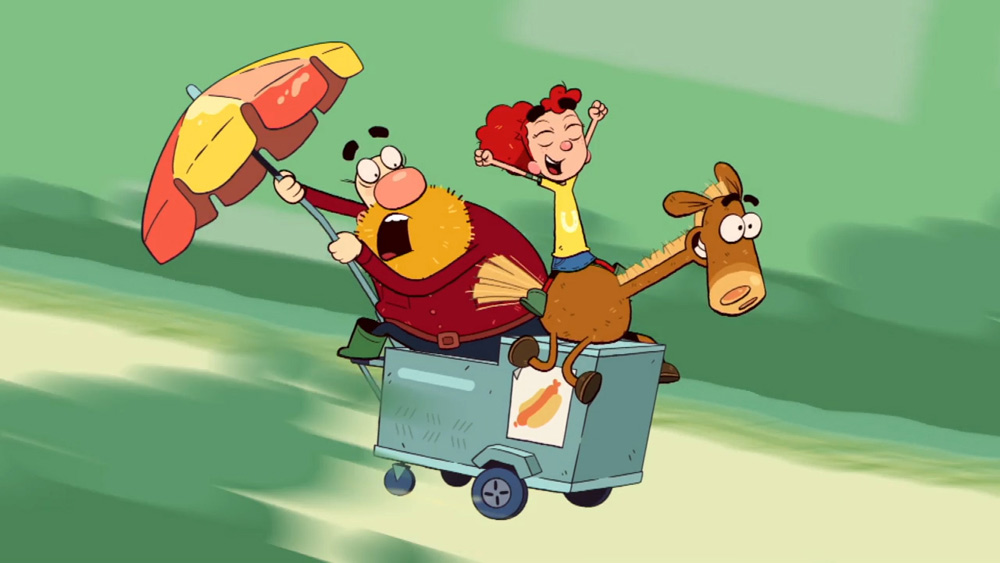