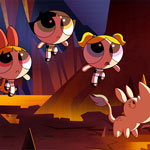 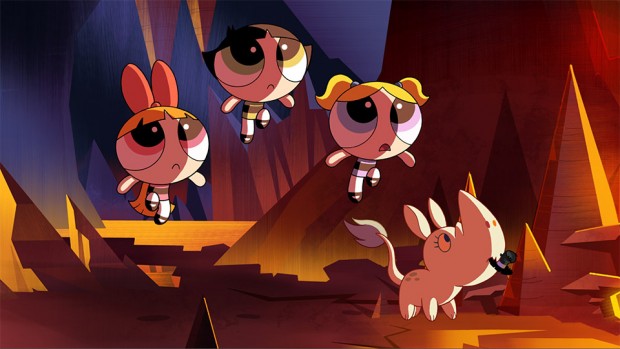 Craig McCracken’s The Powerpuff Girls was one of Cartoon Network’s most iconic hits during its original run from 1998 to 2005, enjoying huge success as a program and as a licensed property while helping to define the Turner outlet’s identity.

So more than a decade after Bubbles, Buttercup and Blossom last saved Townsville from one of the monstrous threats that emerged in almost every episode, The Powerpuff Girls are back in an all-new animated series debuting April 4 on — where else? — Cartoon Network.

With McCracken having moved on to Disney, where his most-recent show Wander Over Yonder just concluded its award-winning second (and final) season, Cartoon Network stayed in house by tapping Adventure Time art director Nick Jennings and Clarence supervising producer Bob Boyle to run the show.

“I’m a huge fan of The Powerpuff Girls and always have been,” says Jennings, executive producer on the new series. “It was pretty groundbreaking at the time. … So to reboot it 15 years later and give it a new modern spin was a great opportunity to take something that we loved originally and tried to give it a spin for more of today’s audience.”

“It’s a great universe that we all love and were influenced by, and there’s lot to play around with,” says Boyle, whose title is co-executive producer. “I think storytelling is different now than it was 15 years ago when the show premiered, so it seemed ripe for some updating.”

Jennings says CN had few specific directives for the show. “They weren’t mandating anything specific, other than just give it some kind of modern spin, turn it into something that is fresh with kind of a new vibe,” he says.

With a largely blank canvas, Jennings and Boyle analyzed the show to figure out which parts were timeless and essential and what need to change to give it a modern feel.

“In general, the way we tell stories now, we tend to be a little more character driven,” says Jennings. “The original show, you could dig only so deep with the characters and then you didn’t really get to know them any more than Blossom is the leader, and Buttercup’s the angry one.“

Figuring out and understanding in detail the characters’ personalities not only made them more relatable, Jennings says, it created fresh material the writers could mine for stories.

Along the way, a number of different takes on the idea of three cute little girls who also are tough-as-nails superheroes were pitched. Among them: having the girls attend superhero school or sending them into the future. “Ultimately, we came back to these are really great, strong characters and there’s not a whole lot that you have to change,” says Boyle.

But there are some changes. The most obvious one is that while the girls are still young, they are no longer in kindergarten — a change that Boyle says opened up a lot of story possibilities. “Moving them into K through 12 opens up opportunities for different classes, different teachers; they can have lockers and club sports, kids of different ages,” he says.

But they’re not that much older. “I think one of the core dynamics that works for this show, that always works for this show, is they’re like super cute kindergarten age girls that fight monsters before bedtime and they’ve got to juggle their little domestic life with their being superheroes,” says Jennings. “We didn’t want to make them middle schoolers, we didn’t want to make them high-schoolers, but we also did want these opportunities to expand the world a little bit.”

“Most of the episodes don’t focus as much on a gimmicky bad guy,” says storyboard artist Julia Vickerman. “It’s a little bit more about the girls and what they’re learning about themselves, like life lessons type stuff, and also the pacing of the show is a lot faster than it used to be to accommodate what kids are watching these days.”

Many of the same issues faced the visuals for the show. “There are a lot of nostalgic impressions that I don’t want to lose, such as the girls’ heart-shaped bed, or three holes in the house and the general feeling of the Townsville,” says Eusong Lee, art director on the series. “Those things I think we had to keep to keep the whole vibe, but we tried to push the colors and the style.”

Among the tweaks: dropping the thick black lines that made the original series so distinctively graphic, minor design changes to the girls and a slight alteration of proportions. The overall result is an intentionally subtle difference.

“We want it to feel like the original, but we also wanted to expand it and make it feel a little more as if you can connect with it as an audience,” says Jennings. “We did that in a lot of different ways, subtle ways and not so subtle ways. We rounded some of the edges and we made things a little more volumetric, but we still have a lot of things that are very graphic.”

“I think the show is actually dramatically different visually, but the girls are so iconic you look at it and it feels like you remember the original show being, so it doesn’t come off as feeling different,” says Boyle.

The show is board-driven with Jennings and Boyle coming up with outlines for episodes, handing them off to two in-house writers who both have an improv comedy background and then to the show’s four pairs of storyboard artists. Animation is done at Sunmin Animation in South Korea.

“Nick and Bob are so collaborative and are letting the board artists have a lot of creative say in this show, which is very nice,” says Vickerman.

While McCracken is not involved in the new show, the production team has been in touch with him and Boyle says he’s been supportive of the project.  “I told him that we’re doing a different thing, it’s different times, a different crew, and he was on board,” says Boyle.

As it is with almost any reboot, fan reaction has been split between those thrilled to have an old favorite back and those for whom the new show can never equal the original. The voice cast, in particular, drew fan fire with a petition launched to have original cast members Cathy Cadavini, Tara Strong and E.G. Daily return. Despite a flurry of promotion, the petition drew few signatures — and Vickerman says the new cast of Amanda Leighton as Blossom, Kristen Li as Bubbles and Natalie Palamides as Buttercup will win over viewers once they see the show.

“Once fans hear and get used to these girls’ voices, they’re going to love them because each of these girls is really making it her own,” she says. “With any reboot there’s always going to be some anger there, but what you have to keep in mind is we’re not erasing the original version.”

“We’re on this show because of the original show and as fans we love it,” he says. “We’re trying to figure out how to make a version that hopefully is somewhere close to the original in terms of its popularity and fun, and I think we are doing that. I’m very proud of the whole crew and what everyone’s doing and how it came out.”

Must-See at MIPTV
A Brand-New Book