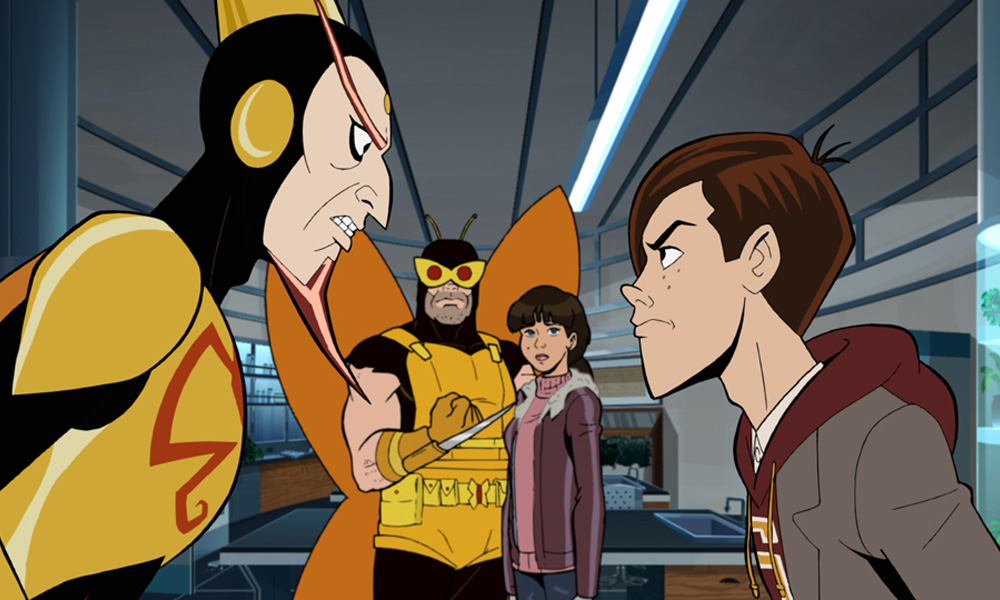 Jackson Publick (a.k.a. Chris McCulloch) and Doc Hammer are the mad geniuses behind Adult Swim’s brilliant series The Venture Bros., which begins its  seventh season in August after a 28-month hiatus. When we last saw the gang, we witnessed all kinds of wild developments involving the supernatural assassin Red Death, The Monarch, The Blue Morpho and Henchman 21, who had locked the villains in a secret bathroom in the Morpho Cave. Despite their crazy busy schedules, Jackson and Doc found some time to give us a sneak peek at what to expect in the next 10 episodes of their cult classic creation.

First up, how does it feel to be back in the saddle for the seventh season?
Doc Hammer: When we started out, we didn’t think we’d be working on Season Two! The way things work in this business, you’re never guaranteed anything, and we came into it as beyond neophytes … we were idiotphytes. Morons. We didn’t know what we were doing. We killed our characters at the end of season one, thinking, “Well, if we don’t come back, that was quite a season. Good night, everybody!”

Tell us a little bit about the logistics of the show. Where is the animation done? How do you work out the storylines, etc.?
Doc: Most of the hardcore animation is done by Digital eMation (Seoul, S. Korea), we’ve been using them for years. The animatics are done at Titmouse in L.A., and some in New York. I’m based in Manhattan, and Jackson is in L.A. We’ve been doing a bicoastal thing … We have become even closer now. We’ve worked with each other for so long. He’s just not my partner, he’s my world. He’s my best friend. We raised a child together! So, he went away to L.A., we had to learn how to communicate.

Jackson Publick: We tried Skype once, and it took me an hour to install it, and my 20-year-old cat came into the picture, and we became distracted by my cat. I just couldn’t get stuff to work, so now we talk on the phone, and once a month, we meet up and we do a lot of writing. I get to hang out with my best friend with a looming demi-guise of labor behind it. We joke around a lot and I record everything just in case our jokes are good enough to be on TV.

The big challenge of the job is working on the new season for about a year and a half straight, without having weekends off. I guess storyboards are always the trickiest part of the job, that’s where all the direction happens. That’s where I focus most of my energy on. We have about 24 regular staffers working on the show, but at any given time,  we could have anywhere between eight to 30-something. We have a ragtag team of renegades. We use Toon Boom Storyboard Pro in preproduction. The Korean studio does traditional cel animation (pencil and paper) — with color and composite as the only parts of their pipeline. We get After Effects comps of the animation, backgrounds and camera moves.

Why do you think Venture Bros. developed such a passionate, cult following?
Doc: I think when you make something so personal — the kind of show that you want to see — it appeals to very specific kinds of people. For example, I think if you’re a Venture Bros. fan,  you are probably smarter, more detail-oriented than most of your friends. You’re probably a pet owner. You have a direct connection with shows or hobbies that are beloved to you, but nobody else seems to give a damn about. You’ve seen all the Buffy shows, or all the Star Trek episodes. You are a big collector of information. You are a collector of things. It’s so specific to our crappy lives, that it will resonate with any other person that is very specific. I think that’s how you can have a show on for over a decade, and still be considered a cult hit!

OK, now why don’t you give us a sneak peek of the seventh season?
Doc:  For one thing, we are doing 10 episodes — an honest 10, not doing any specials. We do have a trilogy — it’s actually a two-parter in three parts. We are playing with time. Two episodes happen during the same time span. The third episode is the second part of both episodes. We’d done it before, and were really happy it worked and got off the ground this time. It worked as well as the first airplane!

Doc: We’re dealing with the resolution of The Blue Morpho. This is the stuff we should have done at the end of the last season. We have a big habit of making our finales in the first part of our new seasons!

This is the part where we ask animation masterminds to tell us about their influences!
Doc: I think the fact that I decided to write was the most influential thing I ever did. It wasn’t a profession that I chose to do, it was something that I just stumbled upon. I just fell into it. The deadline is my biggest influence, really! Another influence is how slowly I type. I am very dyslexic, so I spend a lot time correct my spelling. I am a horrible typist.  I use two fingers, and I am very proud when I use my thumb.

There are lots of things I don’t like about cartoons and TV. I am not a fan of irony and snark. I like things to be kind of honest and genuine. I like actual drama and sentimentality. I like the sense of the playwrights from the 1950s. I like to write something genuine about jackass characters. We are trying to write Neil Simon plays, and it’s kind of absurd given the amount of handicaps we have in terms of the time that we have. Jackson likes a little more action that I do, but he tries to do it with the same kind of Taking of Pelham 123 earnestness.

Jackson: I don’t watch a lot of cartoons and sitcoms. I watch things that I could never write — shows like Legion and The Americans. I loved the comedians and weird crap we grew up with, things like The Pink Panther movies and Monty Python. I don’t know if they make their way into my writing that much. I was more into comics. You could say I’m trying to do Neil Simon writing a Frank Miller comic book.

Any other scoops for the fans? Another season? A movie?
Jackson:  We’re looking forward to another season. Nothing official has been announced yet, but we’re game. As exhausted as we are by this season, we’re getting over that hump where you start missing the fun part — making crap up and writing it. Oh, and we’ve got this art book coming up. It was ongoing for years while we were making the show up. We are using the bottom corner pages of the book as a flipbook. They asked us to make 30 drawings of Hank and Bean running. That’s a hot tip about the book: You can flip the pages of the book and in the corner, you can see the boys running

What are you happiest with about the new season?
Jackson: Doc wrote more of the shows than I did this season. A lot of my job was just to make them look good. He gave me a lot of opportunities to have great visual fun. There’s a blizzard in one episode that was just fantastic.

Jackson: Every once in a while we get a little bit of 3D animation from overseas, and we say, “Wow, that’s the best-looking helicopter I have ever seen.” I would write in more helicopters if I knew that would happen. We had a lot of variety of great things to look at. There’s a lot of character work going on all over the place. As usual, we have about a million characters, and they all get something to do this year.  This season, we have about 30 speaking characters in the credits every time. The Guild Council is more active … Orpheus and The Triad get to come back, to everyone’s delight. Everybody’s around!

Doc: My highlight was all of Venture Bros. That was my big highlight.

Jackson: I don’t even remember writing anything anymore. My big concerns were “Did the joke land?”and “Is it pretty?”

Jackson: Recording Mark Hamill was very cool, too. He plays two villain characters in the same episode, and they’re both very different. One of them is called “Presto Chango.” He is a classic comic-book trope character that we’d never done before. I can’t believe he is in season seven!

The Venture Bros. returns for its seventh season  Sunday, August 5 at midnight on Adult Swim. 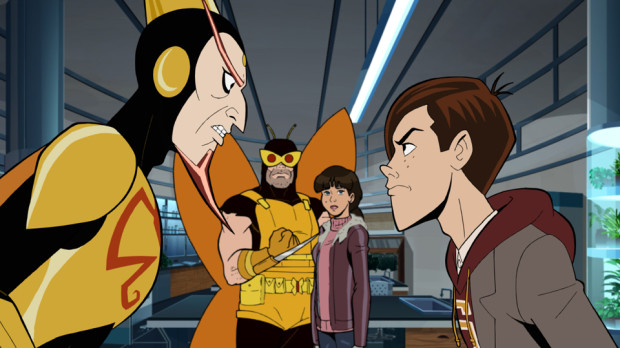 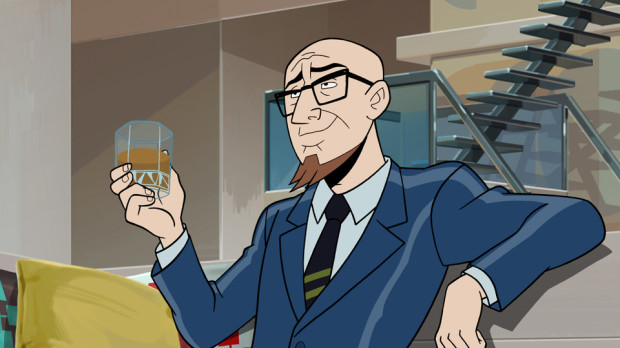 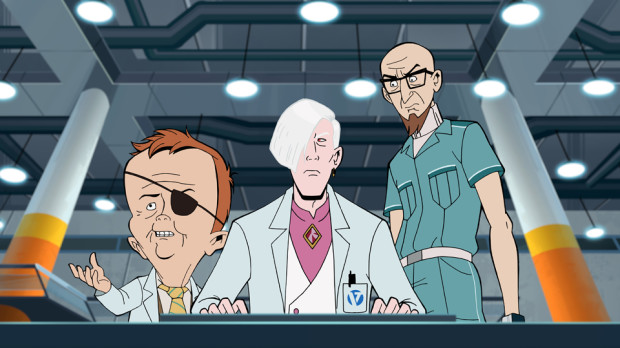 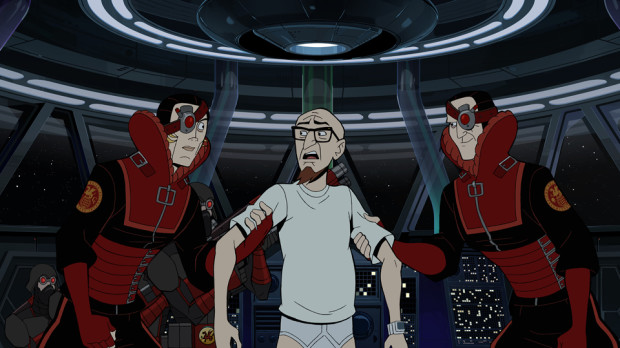 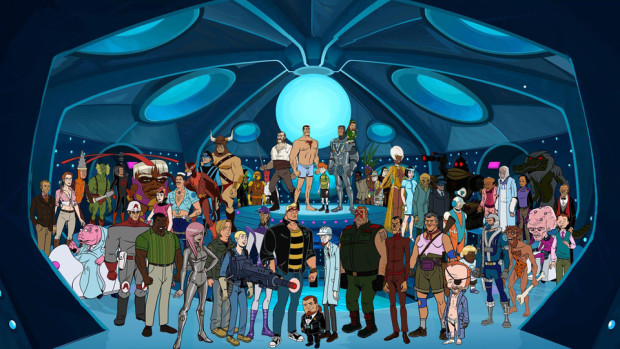 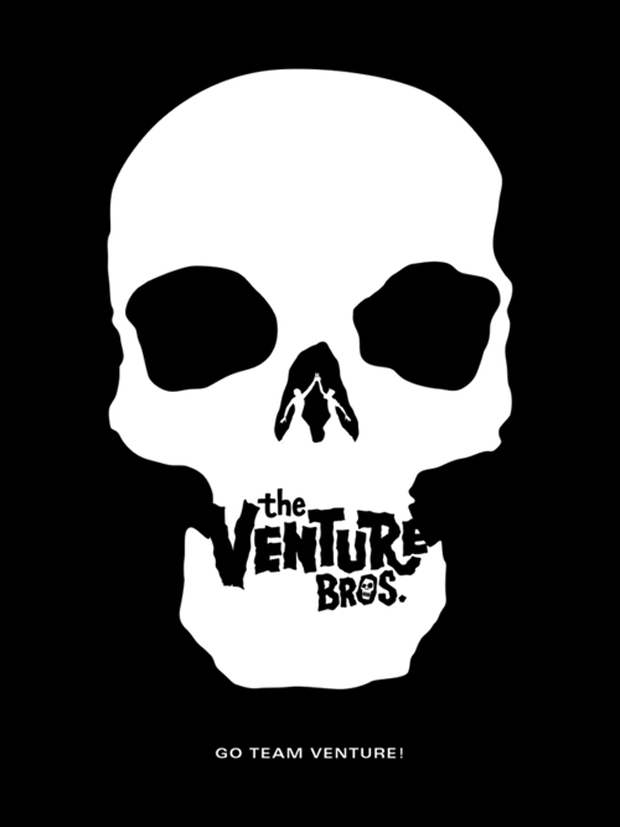 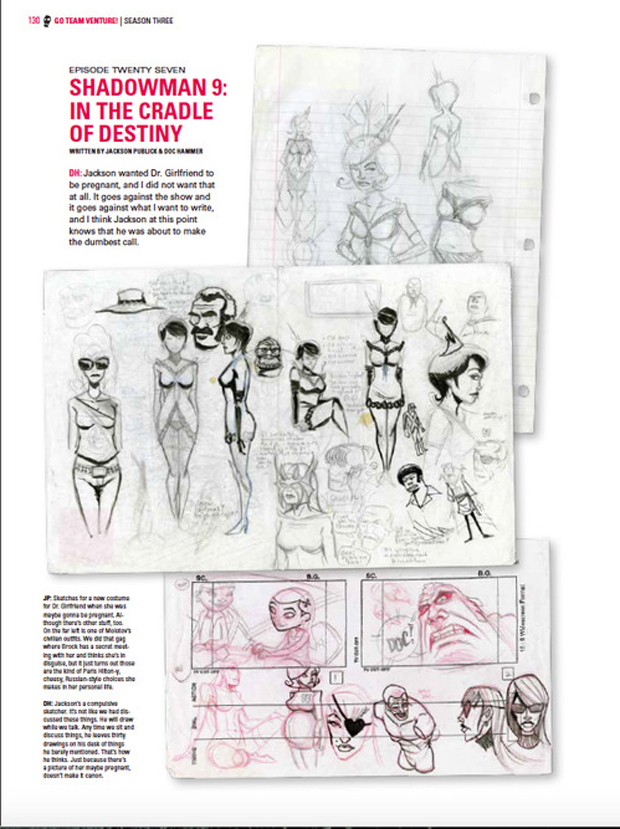 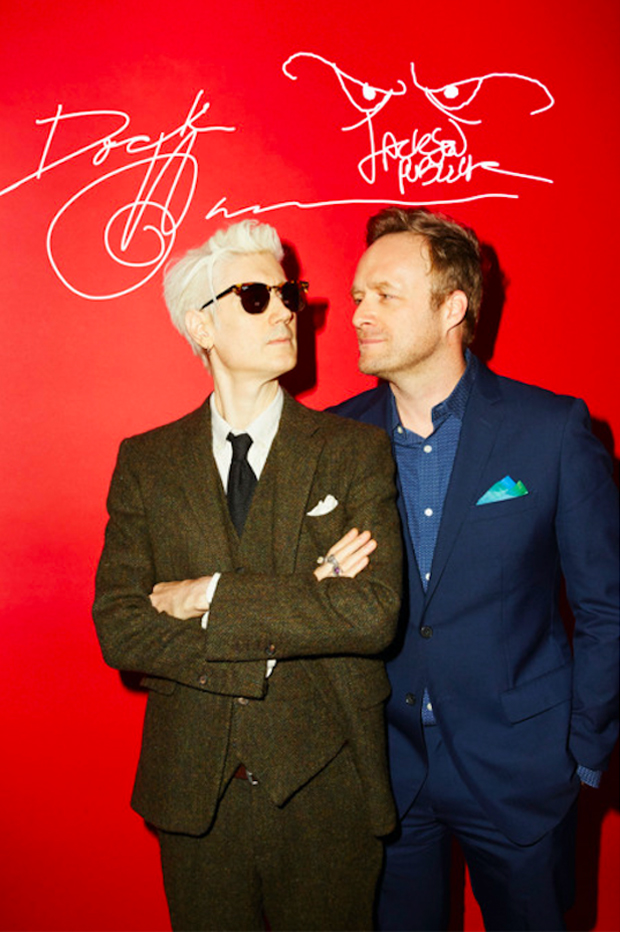