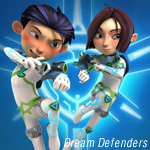 The new deal gives 3net — a 3D network from Sony, Discovery and IMAX — the rights for 3D broadcast, home video, publishing and merchandising in the U.S. Dream Defenders is slated to premiere on the net in October.

“We are honored to have the opportunity to work with 3net to launch the stereoscopic version of our series in the U.S.,” said David Kwok, CEO, Tiny Island Productions.

The series comprises 26 half hours and stars twins Zane and Zoey as the last line of defense between the real world and the nightmare creatures of the Dreamworlds. Controlled by the evil Icela, ruler of Dreamworld, the nightmares have come to life and are threatening to break through and take control. Only Zane and Zoey, and their supercomputer Zeus, stand in Icela’s way.

Here’s a preview video of the show:

The series is based on original concepts by Tiny Island Productions and produced at the Singapore-based studio.

The writing team is supervised by industry veterans Eric and Julia Lewald, who have been showrunners together or individually on 14 series, including X-Men: The Animated Series and Young Hercules.