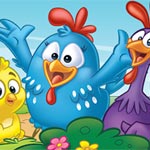 “Lottie Dottie Chicken is a Brazilian success story, and we’re delighted to help drive its future growth with English-speaking audiences,” says Michael Carroll, WildBrain’s business development manager. “WildBrain has proven experience managing and growing English YouTube channels on behalf of international brands, and we’re confident we can deliver the same great content that Brazilian children love to audiences in the U.S. and U.K., too.”

Aimed at children ages six months to five-years-old, Lottie Dottie has amassed more than 20.4 million subscribers across its 10 language channels since its launch in 2006. In May, it garnered more than 420 million monthly views across all of its channels. In February 2014, Lottie Dottie Chicken’s Portuguese channel, Galinha Pintadinha, surpassed 1 billion views and in April 2018, the channel was recognized as the largest “kids’ entertainment and animation” content creator in Brazil.

Created by Juliano Prado and Marcos Luporini, Lottie Dottie Chicken began as a music. In addition to its significant presence on YouTube, the brand has also seen many partnerships and record sales numbers, including hundreds of licensing agreements and an estimated 2.5 million DVDs. Lottie Dottie Chicken’s Portuguese new series, Galinha Pintadinha Mini, provides its young audiences with original and educational content, in addition to the songs. Overall, the brand has garnered more than 18 billion views across channels in Brazil and worldwide.