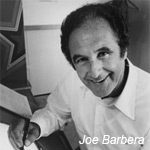 Most cartoon historians are aware that the fluid that fueled the medium during its Golden Age was not ink or paint, but alcohol. Among my favorite booze-related tales from the toon trenches involve enterprising studio reps trying to hire an established talent away from a competing studio by getting them to sign on the besotted line.

One time Joe Barbera, a man who was never at a loss for a story, told me how in the late 1930s the Looney Tunes studio, run by Leon Schlesinger, tried to poach him from the MGM cartoon operation. In one sense, it was “payment” for MGM having briefly pried Freleng away from Schlesinger a year or two earlier. Joe said he was “under the table” the first time he met Friz…but not in that way:

“I was brand new there [at MGM] and they put another brand new guy in the same room. So when that guy left, I got under the table, and when he came back, I started making weird sounds. I could see this guy reacting, but he didn’t know what was going on. Right in the middle of it, the door opens and Friz sticks his head in and looks around. He walks over to the desk and puts his head under the desk and says, ‘Can I speak to you?’ He acts like there’s nothing wrong with sitting under the desk. He wanted me to work with him. I worked with him for about a year. After he was back at Schlesinger’s I got a call. Friz wanted me to come over to see him on a Sunday.” 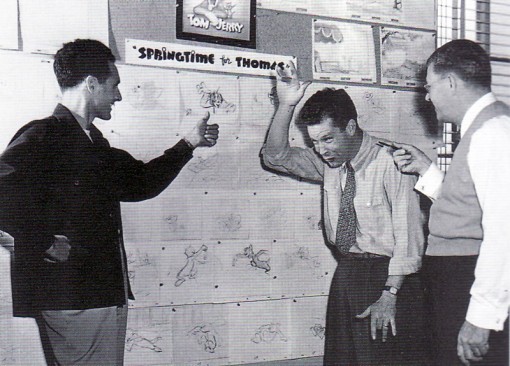 “I went over on a Sunday, and he wanted to make a deal with me, make me a writer, a director, whatever I wanted to be, for twenty-five bucks more than I was getting at MGM. They had the contract out, they had the pen in my hand, and Freleng told me that all he remembered about [MGM cartoon producer Fred] Quimby signing him up was they were feeding him drinks. Friz didn’t drink, but he remembered he was under the table, with his hand on the table, and a pen in it, and they were trying to get him to sign. So I go there and now they’re doing the same thing to me, but no drinks! I went back and told Quimby that I had another offer from Friz for twenty-five dollars more, and he picked up the phone and said, ‘Get me Leon Schlesinger!’ He said, ‘Whatsh thish I hear about you trying to take shome of our people!’”

Whenever Joe mimicked Fred Quimby, he enjoyed exaggerating his former boss’s speech impediment. In his final years, Joe would look out the window of his corner office in Sherman Oaks and say, “Oh, look, there’s Spesulveda…Sedulpshpeva…Shtepulverize…” mocking Quimby’s inability to pronounce “Sepulveda.” He delighted in raking Fred C. over the coals because decades after the fact, Joe was still annoyed that Quimby had kept all of the Oscars he and Bill Hanna won for their Tom and Jerry cartoons…but that’s another story.