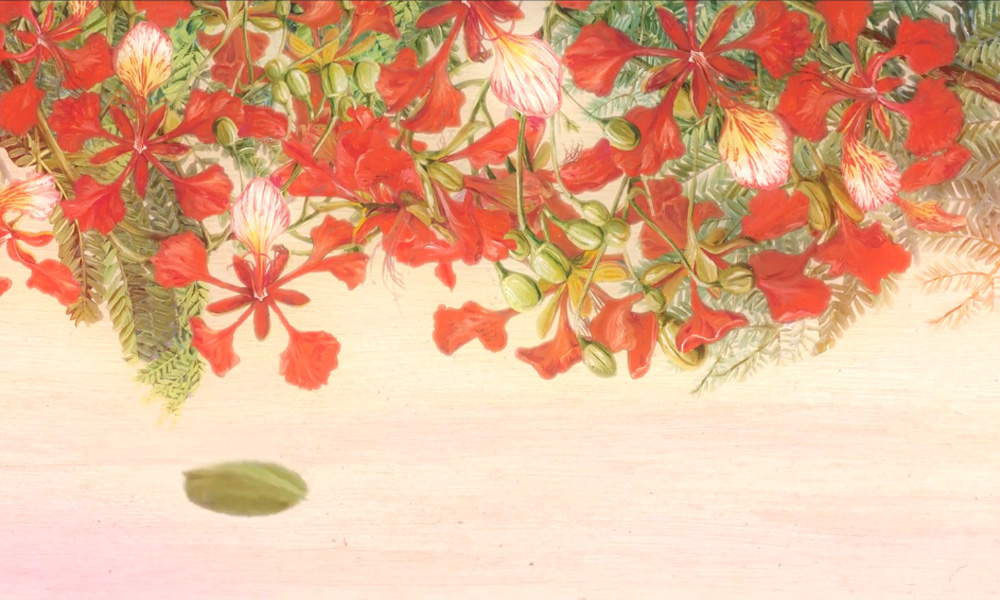 Described as “Kew’s Forgotten Queen,” North was a Victorian phenomenon. She spent half her life capturing the natural world in stunning oil paintings of exquisite detail, venturing out on her own to paint in the most remote, dangerous and extreme environments on Earth. Whilst spending months in a hut within the Amazon Rainforest, climbing through the jungles of Borneo and crossing the Australian bush, she created over 800 paintings that beautifully describe the flora of our planet.

Her legacy is displayed within the Gardens’ Marianne North Gallery, conceived and created by the artist herself. Packed with paintings arranged to the ceiling, the Gallery features the oldest permanent solo exhibition by a female artist in the world, yet North’s work is relatively unknown.

Using North’s own paintings and words as a vehicle, Trunk director Rok Predin’s short film introduces and explains the life of this remarkable Victorian. Unlike the majority of 19th century botanical painters, North always painted her specimens in the environment in which they grew, giving the team the inspiration to take the viewer on a wonderful journey into the paintings themselves. The film is beautifully voiced by Emilia Fox, who presented the BBC 4 documentary Kew’s Forgotten Queen. The sound and mix was handled by Fonic.

To create this immersive effect, Trunk’s team had to digitally deconstruct and reconstruct the paintings, creating layers that contained individual cut out elements, as well as underpainting the missing areas, in North’s style. Luckily the artists were able to draw on previous experience recreating Mila Fürstová’s album art for Coldplay’s “Ghost Stories” and Gustave Doré’s etching style for David Gilmour.

“Being able to recreate portions of the paintings was essential, although we used a mix of Marianne’s work, a number of her paintings were created in portrait, so we needed to paint in additional material to expand the edges to the 16:9 film format,” explained animator Layla Atkinson. “Although seemingly an outrageous proposition, Marianne herself followed a similar practice. When she was hanging her work in the gallery, she wanted everything to fit exactly, and if it didn’t, then she painted extra edges onto her canvases, ensuring her paintings would look their very best together.”