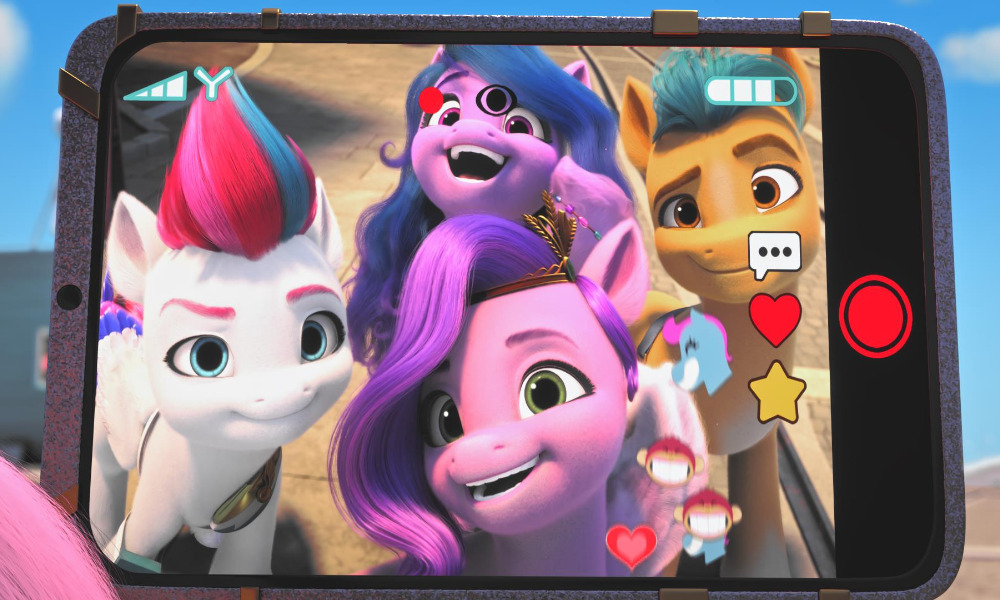 My Little Pony: Make Your Mark

Everypony is in for enchanting surprises and feel-good adventure in My Little Pony: Make Your Mark, the new 44-minute animated special set to launch on Netflix on May 26. A prelude to the “mane” 8 x 22′ series coming in September,  the CG sparkle of this new rodeo brings audiences back into the world of the 2021 movie My Little Pony: A New Generation for a journey of self-discovery told with action, humor and heart. 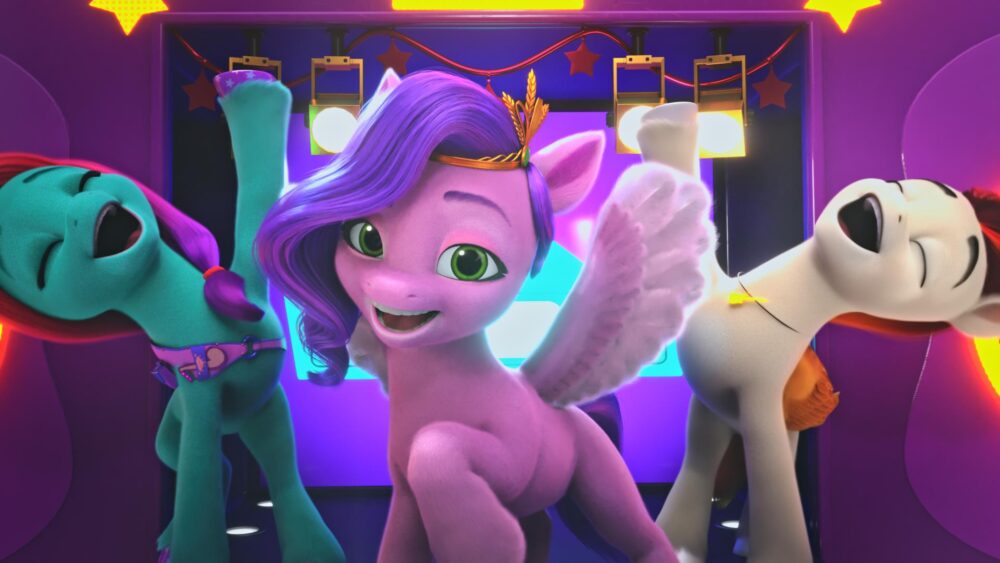 Synopsis: Months after magic has returned to Equestria, Sunny Starscout and her new pony friends are excited to celebrate their new lives on Maretime Bay Day! But while their group may have adjusted to magic’s return, plenty of Unicorns and Pegasi are still having trouble mastering their powers, frustrating the non-magical Earth Ponies who wish to return to how things were before.

This division worries Zipp, who notices that the Unity Crystals have begun glitching, disrupting magic for everyone. Zipp begins investigating, discovering the glitches seem to be happening more and more, their chaos further dividing the ponies of Maretime Bay. She tries to convince her friends that the Unity Crystals are acting strange, but they think she’s worrying over nothing and don’t believe her. That is, until they witness a Pegasus falling out of the sky onto an Earth Pony themselves. This spurs outrage from the Earth Ponies, who threaten to boycott Maretime Bay Day if the town isn’t made a magic-free zone. 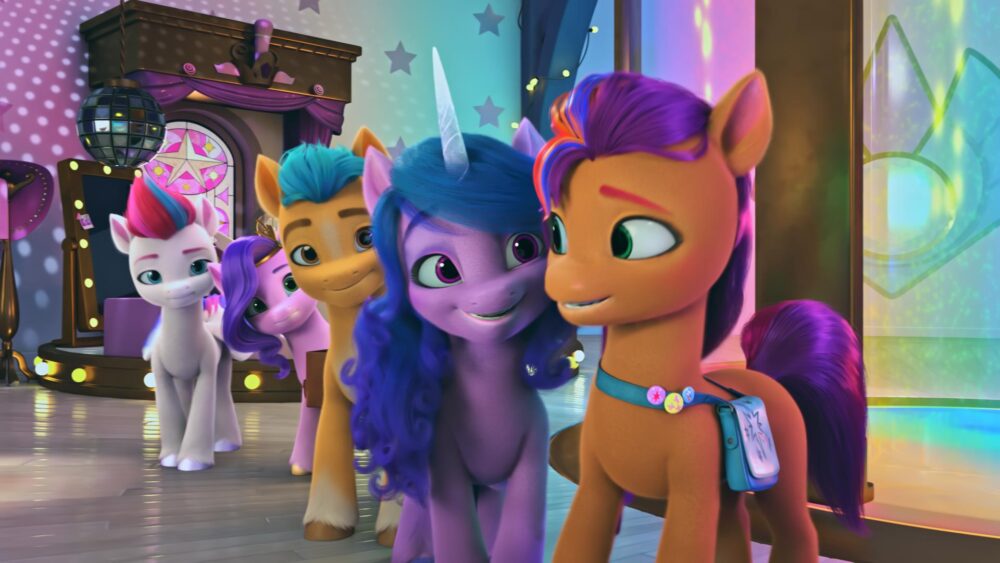 (L to R) Maitreyi Ramakrishnan as Zipp, AJ Bridel as Pipp, JJ Gerber as Hitch, Ana Sani as Izzy and Jenna Warren as Sunny in ‘My Little Pony: Make Your Mark’. Courtesy of Netflix © 2022

Now on her side, Zipp explains to her friends her discovery that magic is glitching when ponies aren’t treating each other with kindness. Their mission now is to throw such an amazing Bay Day that everypony comes together in harmony to stabilize magic again. But as the Earth Ponies air their frustrations with the inclusion of Pegasi and Unicorns in a holiday they see as their own, the glitches escalate, bringing about a massive magical storm that threatens to swallow the town.

In the end, it’s only the power of Sunny and her friends working together that saves the day. As magic stabilizes, the Earth Ponies discover they now too have powers! Feeling included and having seen the error of their ways, they apologize and come together with the Unicorns and Pegasi in harmony to celebrate the rest of Maretime Bay Day together.

Make Your Mark featueres the voices of Maitreyi Ramakrishnan (Never Have I Ever, Turning Red) as Zipp alongside Jenna Warren (Kody Kapow!) as Sunny, JJ Gerber (Monster Pack) as Hitch, Ana Sani (The Boys) as Izzy, AJ Bridel (Odd Squad) as Pipp and Bahia Watson (The Handmaid’s Tale).

The new MLP iteration was developed for television by Gillian Berrow, is produced by Atomic Cartoons, with Cort Lane serving as executive producer, Tristan Homer as co-executive producer and William Lau (The Last Kids on Earth, Barbie Fairytopia) as supervising director. 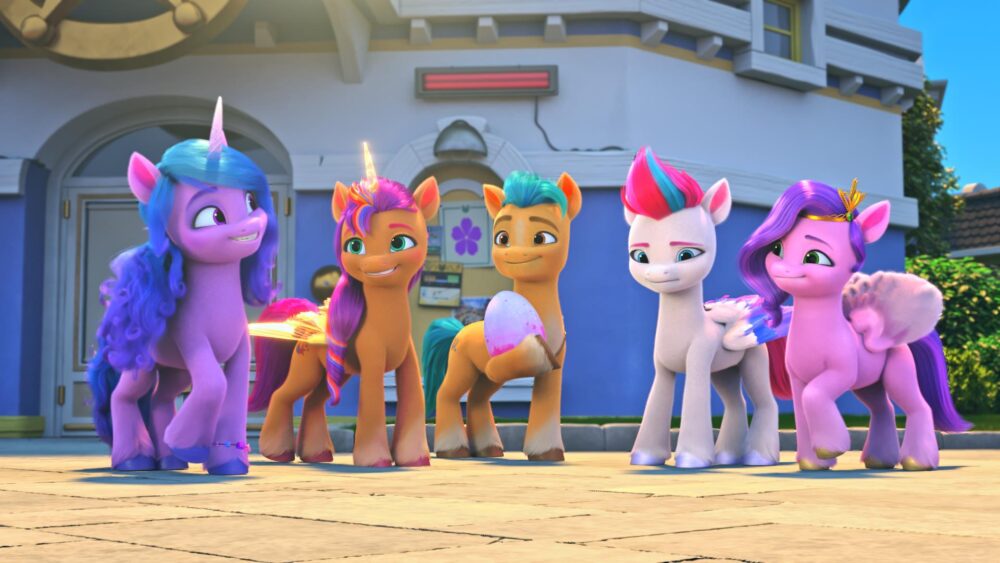 (L to R) Ana Sani as Izzy, Jenna Warren as Sunny, JJ Gerber as Hitch, Maitreyi Ramakrishnan as Zipp and AJ Bridel as Pipp in ‘My Little Pony: Make Your Mark.’ Courtesy of Netflix © 2022