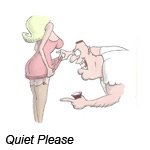 If the Annie Awards ever decided to create a category for Outstanding Achievement in Horrifyingly Bad Taste in Animation, 1989’s Quiet Please would be the hands-on winner. Nearly a quarter century after it was made by Vancouver-based indie animator Mike Grimshaw, this short cartoon (which is not to be confused with the 1945 “Tom and Jerry” short of the same name) has had very few, if any, rivals in terms of sheer vulgarity and outrageous imagery. The retro-styled chronicle of an insanely angry audio-phobe includes scenes of a baby being killed, urinated on, and then shoved back from whence it came; a priest getting his head blown off with a handgun; a man defecating in his pants and eating boogers; and it ends with a card gleefully reading: “Fuck Off, Folks.”

Is it funny? Hell, yeah, it’s funny. But you can expect your laughter to have a long O sound, because your jaw will be dropped throughout.

Back in 1993 I talked with Mike Grimshaw about the cartoon, which ran the festival circuit and gained a rep as the most outrageous piece of animation ever, asking him how he came up with some of the more extreme gags. “It didn’t seem that difficult,” he replied, adding:

“It’s really just childish, scatological humor, if that’s what it is…humor, I mean. When my friend Rod Filbrandt and I wrote Quiet Please we tried in each successive panel to outdo the previous panel with grossness, and it didn’t seem all that tricky at the time. It took about ten minutes and half-a-dozen beers to write the thing. We were setting out to make something that was so disgusting it could not be shown anywhere.” 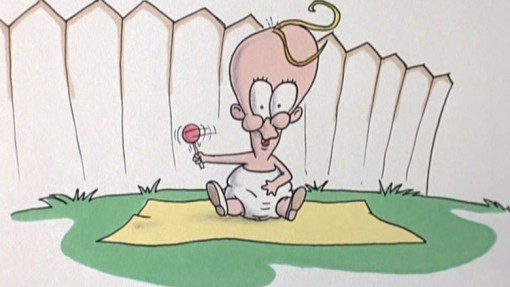 While making something that’s unwatchable is not totally unknown in the toon trade, striving to do so deliberately is pretty unique. But Mike told me there was a reason behind it, aside from the free-flowing Labatt Blue:

“We had made a previous film called Beat that we had tried to put some artistic integrity into, and we never made a nickel off the darn thing. So we thought if that’s the way it was going to be, we may as well do something completely flipped out, something totally the opposite side of the coin. And I guess we succeeded. I’ve been greeted with shock. I’ll met somebody and we talk for a while, and the topic gets around to what we do for a living, and they find out about the films I’ve done, and if they’ve seen those films, they’re thoroughly shocked that they’ve just been having a conversation with a person they have perceived must be a monster. I’m a little baffled by that.” 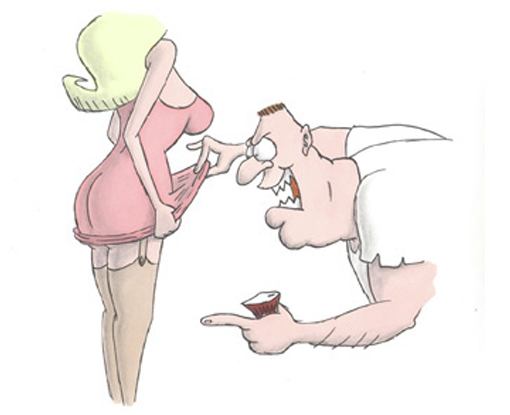 Mike was also behind the short Little Rude Riding Hood, which offered a Playboy Party Joke twist on the concept of Red getting eaten by the Wolf, but he did not devote his entire career to pushing the envelope. In fact, when we spoke, he had recently finished a cartoon about traffic safety for Canadian Sesame Street. “No kids got harmed or maimed,” he assured me.