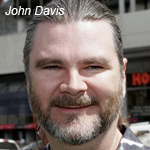 Don’t worry, there isn’t going to be a science quiz at the end of this week’s blog. The “DNA” in question is the great, and unfortunately late, Texas-based animation studio that was responsible for the hit TV show and feature Jimmy Neutron: Boy Genius, and the 2006 film The Ant Bully. DNA Productions (the name was derived from its founders’ names, John A. Davis and Keith Alcorn…D ‘n A…get it?) followed a life-path that has occurred all too often in recent decades: a small, regional commercial house works its way up to a national profile, then has some major successes, and next thing you know, the bubble bursts.

I first discovered DNA through the cartoons that introduced them to most toonheads, Nanna & Lil’ Puss Puss, the short, raucous, edgy adventures of an old woman and her not-to-be-trusted cat.

What made the series so pure was that it was not done for any client, but rather made by the filmmakers––Davis, Alcorn and Paul Claerhout––for their own kicks. Back in 1993, I spoke with D and A about the Nanna cartoons, which were then starting to make a splash on the festival circuit. “The first two or three we did were down-time projects, things for our own amusement,” John Davis told me, adding:

“We didn’t really know what we were going to do with them other than show our friends and laugh at them. We used to watch Rocky and Bullwinkle as kids, and we’re up against the same problems they were up against, which is producing inexpensive animation and yet having it be entertaining. So you design it to be just funny to look at, even if it doesn’t move a whole lot.” 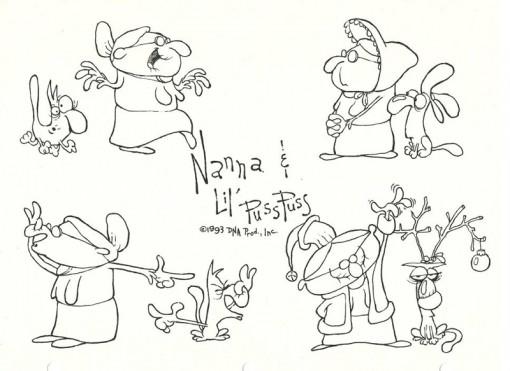 The black-and-white cartoons recall the single-line look of Tom Terrific. As for the outrageous content––in one cartoon, Nanna dies and goes to Heaven (where she meets John F. Kennedy, exposed brains and all), but is sent back to Earth, only to discover that Puss Puss has eaten her leg––Keith Alcorn noted that the series was drawing surprising fans:

“It’s funny how you can get away with things in live action that’s just too offensive if it’s animated. But people that I wouldn’t think would care for fourth grade boy’s bathroom humor, they love it! They love the theme song, which is one of the silliest songs ever written. Every time we got to post a new episode of Nanna and Lil’ Puss Puss, as soon as I walk in the door, they’ll start singing it to me, and yelling ‘Mother of God!’ through the building.”  [“Mother of God!” is Nanna’s catchphrase.]

DNA may be gone, but the cartoons live on through YouTube. D and A remain active as well, having teamed most recently for Nickelodeon’s Planet Sheen for O Entertainment. Whether Nanna & Lil’ Puss Puss was ahead of its time, or right on time, and a harbinger of things to come, is a topic for discussion. But these days, the very notion of making a whole series of cartoons just for the sheer holy hell of it can elicit only one response: “Mother of GOD!”