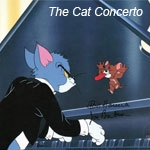 It’s only August, but Oscar chatter is already starting to be heard.  This has reminded me of one particular Oscar-winning cartoon, around which revolves one of the few genuine mysteries of the cartoon world:  the uncanny, even suspicious, similarity between Warner Bros’ 1946 Bugs Bunny cartoon Rhapsody Rabbit and MGM’s 1947 Tom and Jerry short The Cat Concerto, which took home the Oscar.

The fact that Rhapsody was released the year before Concerto might seem like a clue, but in fact both cartoons were produced in 1946.  Each features a protagonist—Bugs in Rhapsody and Tom in Concerto—in the guise of a tailcoat-clad concert pianist performing Listz’s “Hungarian Rhapsody No. 2,” battling a mouse that bedevils them from inside the grand piano. In the case of Concerto, the mouse in question is, of course, Jerry, while in Rhapsody, Bugs (cast uncharacteristically as a victim) battles a generic, unnamed mouse. 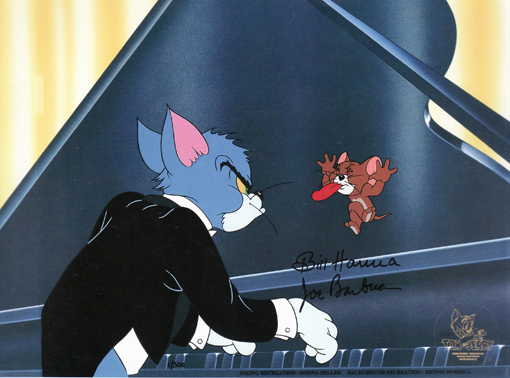 Theories attempting to explain the mystery continue to be put forth. One has footage being leaked from Technicolor Labs from one studio to the other. Another, from musicologist Peter Gimple, theorizes that the connection was a concert pianist named Shura Cherkassky, who, it is claimed, not only recording the soundtracks for both cartoons, but actually passed the idea for Cat Concerto to MGM directors Bill Hanna and Joe Barbera. However, others sources identify cartoon composer Scott Bradley as the pianist who recorded the track for Concerto.

In 1999 I put the question directly to Joe Barbera. “The idea of having the cat play the piano was fascinating to me,” Barbera told me, “So we decided to go ahead with the Cat Concerto, and do the Second Hungarian Rhapsody. We happened to have under contract one of the best pianists in the United States at the time, a famous concert pianist.  His name eludes me at the moment, but he loved doing it.” 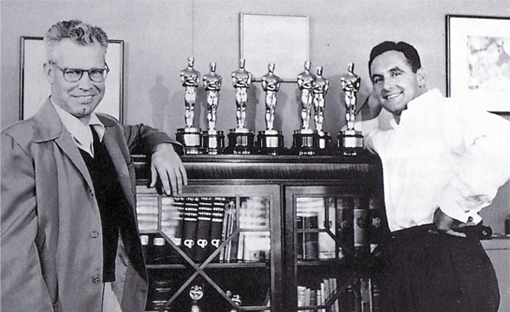 Bill, Joe and Oscar: Bill Hanna and Joe Barbera pose with their
seven Oscars, which were kept by producer Fred Quimby.

While Scott Bradley was a classically trained pianist, he was not renowned as such, so the identity of the musician behind Tom’s performance remains elusive. Barbera did, however, remember exactly when the similarities were discovered:

“It was at a screening for the Oscar nominees.  We [Cat Concerto] played first.  When it came on, people were laughing like hell, and when the lights came on, Freleng was mad as hell.  Then it [Rabbit Rhapsody] played, and the action was similar:  Bugs walked up in the tailcoat, flipped it up, sat down, warmed up the hands, looking arrogant, all exactly the same.  In ours, Tom, the cat, disturbs the mouse, and in his, Bugs, the rabbit, disturbs the mouse. Ours ended up as one of the five [Oscar] finalists, and people had the feeling that he [Freleng] was ripping off our cartoon, but he said, ‘No, no, no, I never saw your goddamned lousy cartoon!’”

Was it, then, simply just an incredible coincidence?  “I really believe that,” Barbera told me.  “Freleng had a sense of humor, we just thought the same, and our gags were the same.”

That said, Barbera did pose a pertinent question of his own:  “What’s a rabbit doing with a mouse?”