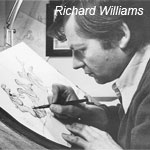 One individual animation drawing goes by faster than the eye can register. Animators have an abundance of funny ideas.  Animators working in England frequently go to lunch in pubs and knock back a few, lubricating those funny ideas.

To what do these three facts add up? To that fact that 1988’s Who Framed Roger Rabbit, animated in England, is the single greatest animator in-joke movie ever made.

Most, if not all, animated films have hidden jokes planted by the artists somewhere.  They may be innocent, such as anachronistic character appearances (Mickey Mouse, Donald Duck and Goofy can be spotted in The Little Mermaid, if you know where to look), or they may be down-and-dirty, such as the infamous nude in the window in The Rescuers, or the lesser-known shot of Geppetto’s arousal while in bed from Pinocchio, which is only discernable in extreme slo-mo. 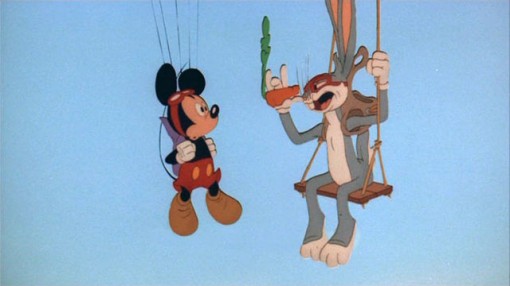 One classic occurs in the 1942 Bugs Bunny short The Wabbit Who Came to Supper, in which Bugs gets out of a shower and drops the towel that covers him, momentarily revealing…well, something.  Some fifty years after the fact, I asked the cartoon’s director, Friz Freleng, for clarification regarding it, and the rather shocked Freleng professed:  “We wouldn’t have done it on purpose.  It if was a trick by an animator, I’m sure the [ink-and-paint] girls would have called attention to it.”  Yet there it is, visible even to the naked eye.

The crew of Roger Rabbit had no such qualms.  Among the hidden and less-hidden images are Baby Herman reaching up into a woman’s dress, Betty Boop and Jessica Rabbit flashing, and Bugs Bunny flipping Mickey Mouse the boid.  Animator Dave Spafford, a master of such hidden images, was responsible for the last one.  In 1996, he described to me the gags that made it into the film, and the one that got away: 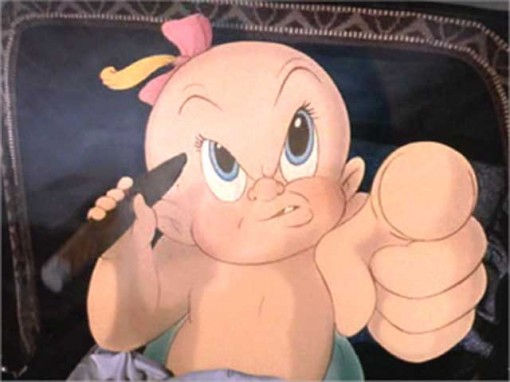 In the Daffy Duck piano-playing scene, I’m animating Daffy, and I thought, ‘He’s moving so fast that I’m going to have him play the piano with different objects.’  So he starts playing the piano with dead chickens.  But while I was doing that I thought, ‘I’m going to do a joke inside it, a hidden thing inside a hidden thing.’  As he’s flailing these dead chickens around, I put in one in-between where he’s holding dead baby tied up with a rope.  It was pretty gross. “I’m sitting there, laughing to myself, and Zemeckis, Spielberg, Richard Williams, Robert Watts and Don Hahn are doing a tour around the studio.  All of a sudden, Richard Williams comes over and says, ‘Oh, so that’s what he’s been doing.’  I said, ‘Oh, that’s just a joke,’ and I took the [baby] drawing off.  But I said, ‘I thought I’d have him play with these two dead chickens,’ and they went for it, because no one will ever see it.  But I had to take out the baby.  That would have been a classic cel!

Oh, by the way…that shot of Baby Herman sticking his finger up the woman’s dress?  According to Spafford, that was animated by Richard Williams himself. 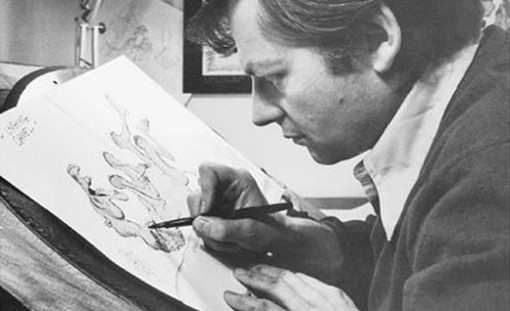