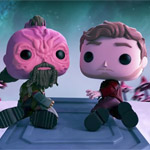 Marvel and Funko have re-teamed for a second season of their immensely popular animated shorts. The new batch, comprised of eight new 90-second Marvel Funko adventures, launched Wednesday with Cosmic Sleigh Ride: A snowy game of cat-and-mouse featuring Guardians of the Galaxy heroes Star-Lord and Groot being chased down an icy slope by Taserface — check it out below!

The Marvel Funko shorts series feature feature some of the most popular super heroes (and villains) of the Marvel Universe in their cutely super-deformed forms made popular by the Funko POP! collectible vinyl toys. These include Thor, Loki, Hulk, Black Widow, Doctor Strange, Captain America, Red Skull, Ant-Man, Hulkbuster, Ultron, Spider-Gwen and Venom, to name a few.