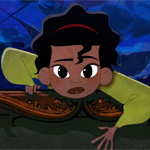 Shannon Tindle, the Emmy-winning animation story writer and character designer who came up with the acclaimed Kubo and the Two Strings, delivered a bittersweet treat over the weekend by revealing the pitch teaser for a Haunted Mansion animated series he developed for Disney … which sadly didn’t go forward. Although with how warmly it was received on Twitter, the poltergeists of Toon Town may have creakily re-opened the door!

Tindle was developing the concept as part of his overall development deal with Disney Television Animation. “My goal was to take inspiration from all the backstories created by the artists at WED and stitch it into one, giant narrative. The story would span several years and focus on different characters, but add up to one big, interconnected story,” Tindle told Cartoon Brew.

Artists who worked on the teaser with Tindle were Sunmin Inn, Matt Williames and Rachelle Reyes; Marsai Martin (Black-ish) provides the voice. Tindle won an Emmy for Individual Achievement in Animation for his work on Foster’s Home for Imaginary Friends; his credits also include Coraline, The Croods and The Fairly OddParents.

A little something I was cooking up at Disney, but was unfortunately scuttled. Thanks to @marsaimartin for the brilliant voice work, @ActionMovieKid for putting it all together and the amazing artists, Sunmin Inn, Matt Williames and Rachelle Reyes. https://t.co/32p8tZucDq