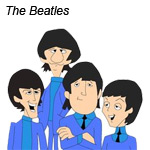 One of the hard truths about animated cartoons is that many of them simply do not stand the test of time very well. For every Bugs Bunny there are multiple Flip the Frogs, characters and cartoons that are watchable today only as history. That is why I was delighted to stumble over one of those 1960s Saturday morning Beatles cartoons recently and discover that, despite their stylized cheapness and off-the-wall content (or maybe because of those), they hold up beautifully today. These short musical romps, which began airing on ABC in 1965, present the Four at their fabbest and most gonzo.

Produced by King Features honcho Al Brodax and Canadian animator George Dunning, who would both graduate to the landmark 1968 feature Yellow Submarine, The Beatles was an undeniable hit at the time. But it was also a little hard to know just what to make of it, at least for a kid (all right, maybe only for me). Each cartoon was essentially an excuse to animate a real Beatles track, while wrapping a broad, slapstick misadventure around it. The idea was adapted from the group’s stream-of-consciousness feature films A Hard Day’s Night and Help!, but even so, nothing quite like it had been done before in TV animation (remember, this was the time when Saturday morning consisted mostly of “funny animal” cartoons like Tennessee Tuxedo and Muggy-Doo) It would, however, established the pattern for other musical shows that would follow, including The Banana Splits, Everything’s Archie and Josie and the Pussycats. It could even be argued that The Beatles set the stage for the ultimate Beatles tribute show, The Monkees. 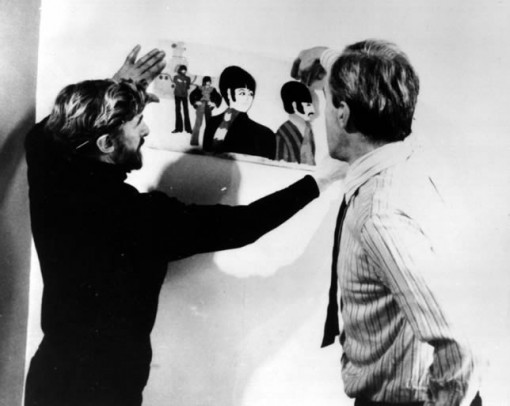 (from left) Jack Stokes, who directed The Beatles TV series, looking at a Yellow Submarine cel with George Dunning.

Among the factors for the show’s success, and its quaint charm today, were the dead-on caricatures of John, Paul, George and Ringo (whose voices were provided by Paul Frees and Lance Percival, doing two Beatles each). Way back in 1995, I spoke with comic-book artist Joe Calcagno, who told me that he was the one who first transferred the Fab Four from the stage to the cel:

“The Beatles series for ABC was before Yellow Submarine. That show was how they got the idea to do a full length movie, but my cartoons of The Beatles were actually the first. I designed the characters, then they made the animators’ versions of them. I had seen [A Hard Day’s Night] before and I was influenced on how to get ’em into crazy positions and situations, like with animals, where they were in danger. And then they gave those pictures to the writers so they could see what the characters would look like for a cartoon and come up with the stories.” 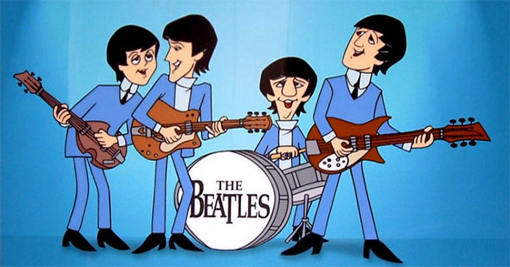 The Beatles ran for four seasons on ABC, lasting almost as long as the group itself. It is said that the real Beatles were not particularly enamored of the series when they first saw it, but with time, they grew to appreciate and enjoy it, John Lennon in particular. So 30years ago, The Beatles was already becoming that rarest of animated series: one that starts improving with age almost immediately.

And the music was great, too.