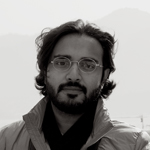 As a freelance production designer and concept artist, Robin Joseph’s clients have included major studios such as Pixar, Illumination, DreamWorks, Blue Sky and Sony. But the Indian-born artist, who calls Toronto his home these days, always wanted to try his hand at directing his own animated short. That’s how the beautifully realized project was born.

Joseph used his personal savings to finance the short, which follows an inquisitive fox on his search for a whale. “I was trying my hand at a lot of new things for the first time,” he recalls. “Visual effects like water, fire, particles, etc.; compositing, storyboarding. Conceptually I had ideas about how these could work, but the short was also a proving ground to test these out.”

Another major technical challenge was the film’s sound. After losing his original sound designer, Joseph relied on the generosity of Tim Nielsen, who loaned his entire sound library of his personal field recordings. “Tim was also generous enough to walk me through picking studio monitors within my budget and also offering advice. He had a busy schedule, but he always left room for me to give him a quick ring. I really couldn’t have finished the film without Tim. I really, really got lucky!!”

Joseph and his partner Kim Leow worked together for 16 months to realize his vision. “All the CG character animation, modeling and rigging was done by my partner Kim, using Maya,” notes Joseph. “I did the rest using Adobe CC: Storyboards, backgrounds, and 2D Animation was done in Photoshop. VFX & compositing was done with After Effects, the editing was done in Premiere, and foley and sound design was done using Audition.”

Citing Michael Dudok de Wit’s Father and Daughter and Yuri Norstein’s Hedgehog in the Fog as two of his favorite shorts, Joseph says the inspiration for his own project was the pursuit of curiosity. “A lot of it came from being a big fan of exploration and science, especially space exploration. The ambitions at the fringes of it often seem one step beyond reach. The fact that we still try instills a sense of awe and wonder. At the other end is an idea of failure, or at least what is perceived as failure. It’s a fragile state of mind at times, but to me it holds such optimism.”

Looking back, the director says the learning curve the experience provided was a highlight. The other was a working relationship with his partner Kim. “Being a couple and working together can be tricky,” he admits. “It can be a very fine line. If all goes well, after a point there is a shorthand that develops…and when that happens, it’s really, really great!”

The Fox and the Whale launched on Robin Joseph’s Vimeo page Oct. 10 as a Vimeo Staff Pick.