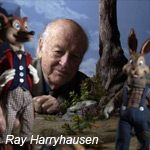 In 2002 I received a call from my editor at the Los Angeles Times, asking if I would be interested in interviewing Ray Harryhausen. After ascertaining who I had to kill to get such an assignment, I found myself a few days later driving out to a house in the San Fernando Valley, which housed a garage studio in which a long-unfinished animated short of Ray’s was being completed by two young filmmakers named Seamus Walsh and Mark Caballero. My editor told me to talk to Seamus and Mark, learn about the film, The Tortoise and the Hare, and then speak with Ray. I assumed I would be talking to Ray via a transcontinental phone call, since he lived in England.

Upon showing up at the house, I made my way to the front door and rang the bell. A moment later the door was opened…by Ray Harryhausen. “Hi,” he smiled, “c’mon inside.” After scraping my jaw up off the porch, I went in and had one of the most memorable interviews I ever conducted, sitting with Ray in the living room of the house. At one point we went out to the garage where the Tortoise set was housed, and I actually got to see him at work, positioning the character of the Hare and lining it up through the camera lens.

Ray Harryhausen, whose animation genius will live forever through such films as The Seventh Voyage of Sinbad, Jason and the Argonauts and Clash of the Titans, passed away today (May 7, 2013). Since he was 92 years old and had been in failing health the last couple years, it was not exactly shocking news, but like his close friend Ray Bradbury, he seemed somehow immortal. 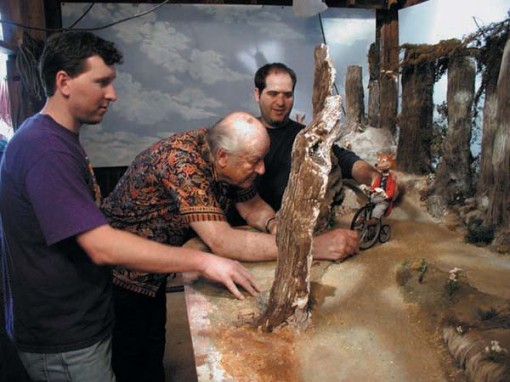 I first met Ray about a decade prior to my interview with him, at a reception held by ASIFA-Hollywood to officially present him with the Winsor McCay Award. Upon introducing myself and declaring my huge admiration for his work, he smiled, thanked me, and then said, “Have you met Jim Danforth? He’s over there. You really should talk to Jim.” While I had nothing against Jim Danforth, it was Ray I wanted to talk to. But I quickly discovered that, for a man who had such an incredible impact on the cinema, and someone who was the most rare of rara avises––a truly unique artist––Ray possessed a genuine modesty. Modesty and generosity.

I ran into him a few more times over the years, most memorably at the San Diego Comic-Con. My son Brendan and I had just seen Ray at one of his periodic reunions with Bradbury, at a bookstore. A day later we found ourselves heading up the escalator at the San Diego Convention Center, where the first person we encountered was Ray Harryhausen, waiting for an elevator. “You two again?” he cried in mock outrage, and then laughed heartily. The last time I saw him he was with not only the other Ray, but also the third member of their troika of seventy fantastical years, Forry Ackerman. 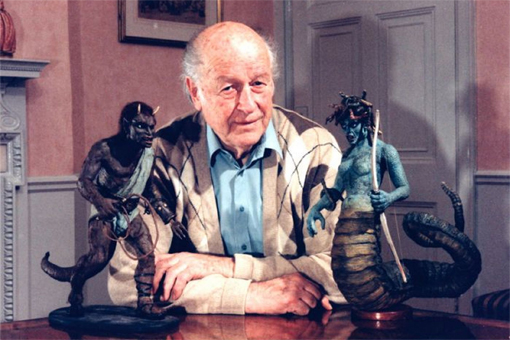 You may also like...
Related Topics:ASIFA-Hollywood, Clash of the Titans, Forry Ackerman, Jason and the Argonauts, Jim Danforth, Mark Caballero, Ray Harryhausen, San Diego Comic-Con, Seamus Walsh, The Seventh Voyage of Sinbad, The Tortoise and the Hare, Winsor McCay Award