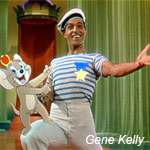 Legendary dancer, actor, choreographer and director Gene Kelly is being feted this week by The Academy of Motion Picture Arts and Sciences, which is staging a centennial tribute to him. Kelly’s stint at MGM during the heyday of the movie musical, of course, resulted in such classics as Singin’ in the Rain and On the Town. But over the course of five decades, he also more than paid his dues in the toon trenches.

Kelly was actually a pioneer in the art of the seamless melding of live action and animation, first in the 1945 film Anchors Aweigh, in which he had a fantasy-sequence dance number with Jerry Mouse. Back in 1998 I spoke with veteran animator and director Ray Patterson, who was in MGM’s “Tom and Jerry” unit, headed by Bill Hanna and Joe Barbera, and who worked on the sequence. “He [Kelly] said it was one of the highlights of that picture,” Ray remembered, adding:

“They took a rotoscope. They had him over here. I remember when he was coming forward [in the dance], he too big steps. Jerry had little feet, and I thought, ‘How the hell is this going to work?’ Jerry kind of slid and did the same movement. Gene was going this far, and Jerry was only going this far, but it came out.” 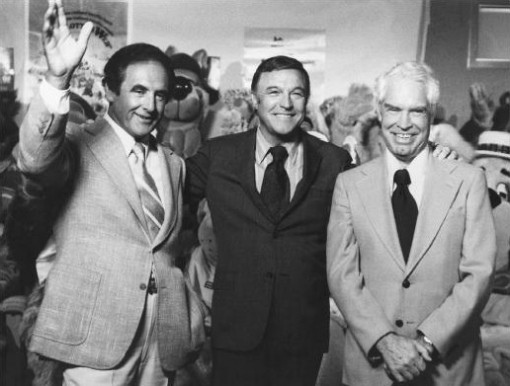 Kelly returned to Hanna-Barbera for the more elaborate “Sinbad the Sailor” sequence of 1956’s Invitation to the Dance, and then again, in the mid-1960s, as Joe Barbera told me in 1999:

“Gene Kelly came over to the studio, smiling, and he said, ‘You remember that dance number we did with Jerry Mouse in Anchors Aweigh?’ I said, ‘Yeah.’ And that night I got the idea to do a Jack and the Beanstalk. I called him up and said I had a helluva idea. I said, ‘You try not to dance, but you keep the giant’s attention and you dance across the street, and grab the harp and beat it. Just on that alone he said, ‘Yeah!’ So we made a deal, and we let him do the live action. He had to go away for a year and a half for us to do the animation.” 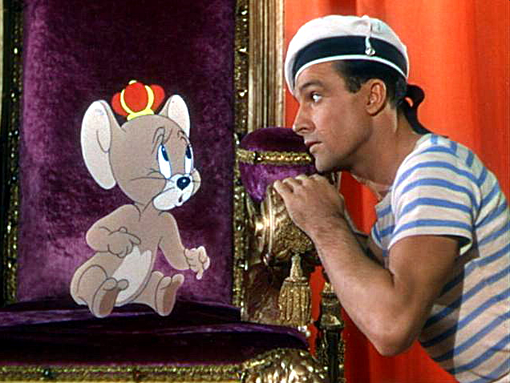 That project earned Kelly an Emmy Award. His last work in film was in animation: he served as choreographer for the 1997 feature Cats Don’t Dance. How does someone choreograph an animated feature? In 1994 put that question to the film’s producer, David Kirschner, who told me:

“Our director, Mark Dindal, would explain the emotions of the scene and what was happening, and Gene would go home and think about it, and come back with his thoughts. The storyboard artist would work with what his ideas and concepts were, especially for a huge number at the end, which is a take-off on Busby Berkeley, and an underwater, Esther Williams-like scene, with a hippopotamus and all these penguins.” 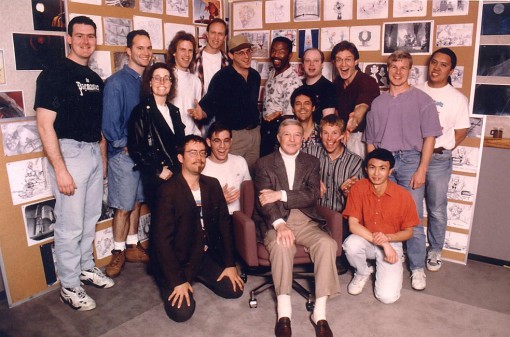 Gene Kelly and the crew of Cats Don't Dance

So the next time you watch Gene Kelly in action, remember that it’s one thing to teach Debbie Reynolds to dance, but another thing entirely for Tillie the Hippopotamus.