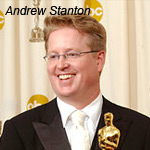 Among my favorite things to discover and write about are “Easter eggs:” the little hidden references and in-jokes that crop up in practically everything that has ever been animated.

Back in 2003, while researching an article about the Pizza Planet Truck, which has appeared in a cameo in nearly every Pixar film to date, I spoke with Pixar’s Andrew Stanton about the phenomenon of in-jokes, and found out that there was a lot more to subliminally see than just a truck. “In Toy Story we didn’t do it as much,” he told me, adding:

“There were little opportunities, titles on the books and that stuff, but it kind of got us going. So there’s names of people who worked on the film are integrated into all the titles of the books in Toy Story. Those you can actually read in the shot. In A Bug’s Life, all of the names of the products in Bug City, all these boxes and cans, are the names of all our kids. John [Lasseter] has five boys, and there are five different items, and my kids are up there, too. We tried to link them with some of their favorite books. [In Finding Nemo] one of the patients in the dentist’s office, who the dentist is late for, is ‘little Davy Reynolds,’ and that’s one of our writers, but he writes in L.A., so he didn’t know we put that in there. ‘Darla’ [Nemo’s red-haired dental patient brat] is named after Darla Anderson, one of our producers, sort of as a rib. Buzz Lightyear makes a little toy appearance in Nemo, when we first find out that we’re in the dentist’s office, and we’re looking in the lobby, and all the toys are strewn on the floor. And I think the Jessie doll [From Toy Story 2] shows up at the end of Monsters, Inc. in Boo’s room, and we threw Nemo in there as a doll. There’s an Incredibles comic book in Nemo that one of the kids is reading in the lobby.” 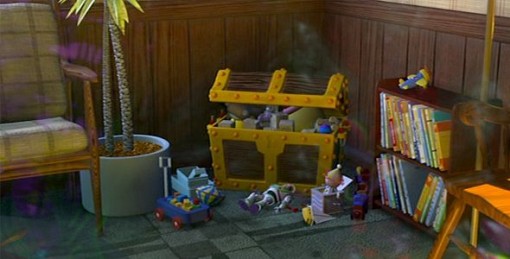 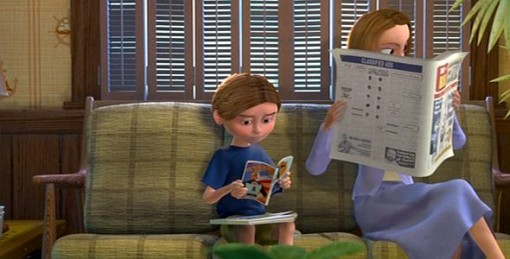 That last gag was put in even before The Incredibles was on the public radar screen. Stanton went on to describe even more gags that related to Hollywood in general, as opposed to Pixar specifically:

“When we had to do Al’s Toy Barn in Toy Story 2, we had to do aisles and aisles of games. It was an opportunity to have fun. You go, ‘Okay, here’s a chance to make fun of games, board games, and action figure dolls.’ We had a whole set on one wall of the aisles of Impressionist painter action figures. They’re things that nobody will ever see, unless they go through the DVD like an art gallery. In Nemo, all the boats in the harbor had to have names, so we had ‘The Surly Mermaid,’ ‘Bow Movement,’ and one of the guys who works here as a sculptor is Jerome Ranft [brother of the late, lamented Joe Ranft], so we called it ‘Jerome’s Raft.’ One of the names we didn’t get in, and we’re kicking ourselves, was ‘The Tipping Hedrin.’”

Okay, maybe that gag is for The Birds. 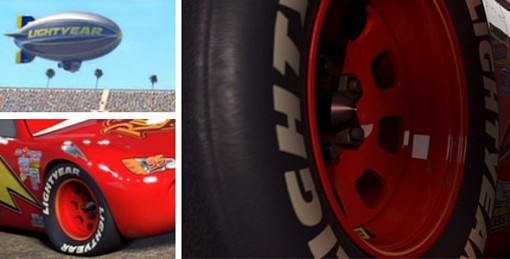 A Tiger Cub Gets His Own Show!
Disney Implements New Paper Policy