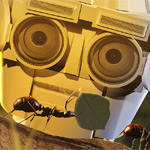 Miami-based Oakstudios has announced its next project, a CG-animated short film titled The Robot and the Ant, to be produced over the new virtual studio system Artella. A teaser trailer si currently available, and the team plans to have the film festival-ready later this year.

“We had just finished the animated series Spaceship Delivery, and I was very excited to employ all the techniques we learned on this new project,” said CEO George Carvalho.

“Artella is a game changer. No longer is it necessary to have artists physically in-house, or have a variety of freelancers using multiple computer systems. Artella allows us to collaborate with some of the best artists around the world to to deliver the best possible product in one virtual space. Everything is created and assembled in their own cloud architecture. And it’s free.”

You may also like...
Related Topics:Artella, George Carvalho, Oakstudios, Spaceship Delivery, The Robot and the Ant