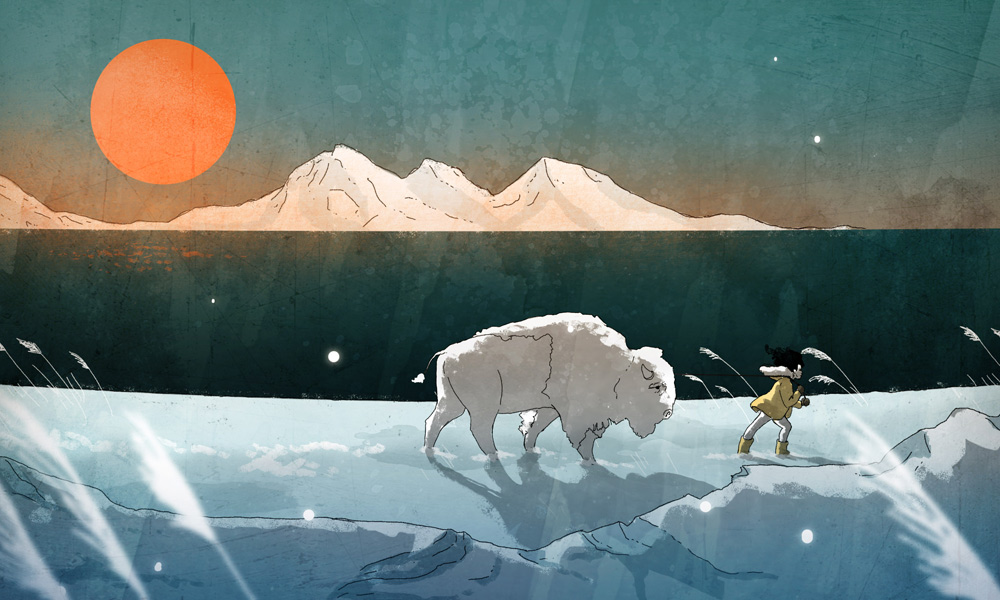 The mythic origins of the Northern Lights are related in a new animated music video for “Northern Song,” a track on Hungarian modern jazz artist Indigó’s first studio album, Salt.

”Though, unfortunately, I have never been to the North yet, I have always had a deep longing for the Scandinavian Region. It seems, music — among its other gifts – can be a magic carpet [that lets you go] anywhere you want,” recalled Ildikó Palágyi, a.k.a. Indigó. While listening to a Norwegian jazz album back in 2016, I was struck by the strongest feeling that I was actually out on the streets of a Norwegian city, instead of being in my flat in Budapest. That was the feeling which eventually gave birth to the ‘Northern Song.’ My idea was to recreate this memory from sound to sound, where fantasies, dreams and reality are intertwined. The use of the looper and a variety of different electronic sounds seemed just perfect.”

The musician knew from the beginning that animation would be the perfect medium for the video. While surfing the web, she came across the works of animation designer Boglárka Ászity, and felt she found the best partner for visualizing her work. Their goal was to go beyond simply illustrating the lyrics to add a new layer, offering new fields of interpretation of the song.

“Ildikó gave me a huge sense of freedom by not binding me to anything, but letting me create the storyline by myself,” said Ászity. “I was glad about the Northern theme, since their lands and attitude towards life are something that I feel very attracted to. The dynamics of the animation was basically defined by the rhythm. There were certain elements that I knew I was sure to use, such as the hunting, the buffalo – almost a totem for me – or the Northern Lights. Sometimes I was just listening to the song for hours and hours, making sketches and jotting down ideas. After I finished a scene, I sent it to Ildikó and from that point, we were developing the story together, until we created the final version of it.”

What resulted is an animated parable of the birth of the Northern Lights. The video follows a girl who — with her companion, a white buffalo — sets out on a perilous hunt to prove herself. At last, face to face with her prey, she realizes that this act of destruction won’t solve her problem. Bravely, she listens to her conscience and surrenders her fate to the creature, who repays this act of compassion by filling the sky with beautiful lights.