Six new short film works from the 11th edition of National Film Board of Canada’s Hothouse program are now available for free viewing online at NFB.ca. Hothouse is designed to kick-start the careers of notable Canadian animation auteurs.

This year’s theme was “Found Sound 2.0” – a reboot of last year’s successful concept which relied on the participating filmmakers to find inspiration in audio clips sourced from the web. This year, participants could either use one of the 14 pre-selected clips or submit a “found sound” of their choice.

This edition also was the first time that participants were able to work remotely with the NFB’s Oscar-winning Animation Studio in Montreal via their nearest NFB productions resulting in a truly national span for Hothouse 11 from Curtis Horsburgh in Victoria, Rhayne Vermette in Winnipeg, Catherine Dubeau and Pascaline Lefebvre in Montreal, Lorna Kirk in Halifax and Duncan Major in St. John’s.

Fyoog by Curtis Horsburgh: A story about a dream about a train, inspired by found sound of a Toronto subway car. Stop-motion and 2D.

Him by Lorna Kirk: A timely short that uses found sound to explore the powerlessness of the refugee experience as a child seeks safety in a war zone. Hand-drawn in charcoal.

Little Big Bang by Duncan Major: A new parent learns about free expression and the power of letting go; inspired by the filmmaker’s new baby as well as found sound. Animated with manual table top press and hand-carved linoleum blocks.

Mindofork by Catherine Dubeau: A visual descent into madness triggered by the effort to keep it all together, nspired by the sounds of an English language lesson.

Pumpers by Pascaline Lefebvre: A good, hard look at the bizarre behavior of people working out in a gym, Inspired by found baby noises.

UFO by Rhayne Vermette: Inspire by found sound from the discovery of a mysterious event in the sky — Have the onlookers interpreted its signs correctly, or was the message misunderstood? 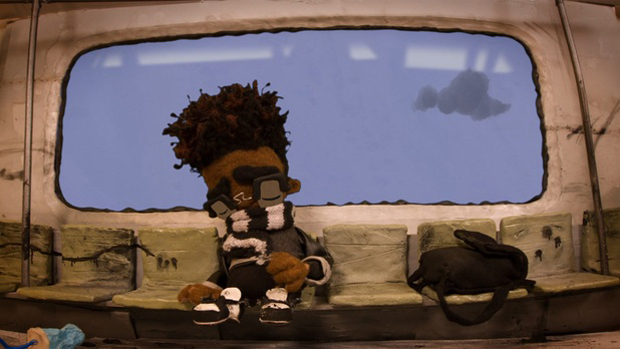