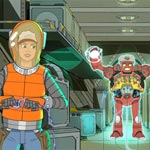 Buckle up, buttercup: voice stars John Cena and Kat Dennings are gearing up to take viewers on a big-rig ride around the universe when the new animated series Dallas & Robo premieres May 30 on YouTube Red. Produced by award-winning animation house ShadowMachine (BoJack Horseman), the eight-episode series will launch on the WWE YouTube channel.

Dallas & Robo is a not-for-kids buddy comedy which follows sassy space trucker Dallas (Dennings) and cowboy-hat-wearing-AI robot Robo (Cena) as they try and make a few dollars in the seedy world of interplanetary big-rigging, while navigating their way through cannibal bikers, rival space truckers and vending machine burritos.

As announced this week, YouTube will be rebranding Red as “Premium” in the near future as it makes room for its dedicated Music service.