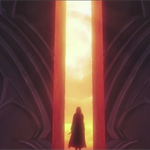 The first look at the eagerly awaited Castlevania animated series has finally arrived, and it seems like a safe bet to say that there will be blood when the show hits streaming on Netflix July 7. The first season will be comprised of four 30-minute episodes, packed with vampire-busting vengeance. A second season is already slated for 2018.

Synopsis: Inspired by the classic video game series, Castlevania is a dark medieval fantasy following the last surviving member of the disgraced Belmont clan, trying to save Eastern Europe from extinction at the hand of Vlad Dracula Tepe himself. The animated series is written by best-selling author and comic book icon Warren Ellis and executive produced by Warren Ellis, Kevin Kolde, Fred Seibert and Adi Shankar.