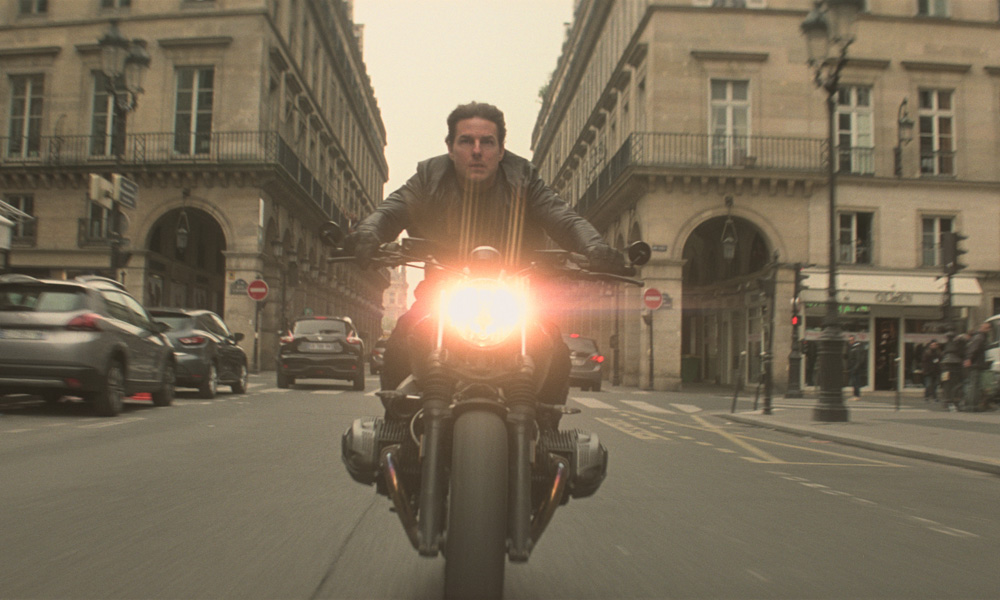 It’s hard to believe that it has been more than 22 years since director Brian De Palma delivered the first Mission: Impossible feature to the big screen. The one constant in the five other movies that have followed are the death-defying stunts performed by Tom Cruise himself, who reprises his role as Ethan Hunt in the latest release, Mission: Impossible — Fallout.

The new film is directed by Christopher McQuarrie, who was also behind the camera for the 2015 outing Rogue Nation. He collaborated with story artist Mark Lambert Bristol to illustrate spectacular stunts that were previously discussed with the various heads of departments.

“There’s nothing better for the visual effects team than working with the real photography and action, as you’re going to end up with a more authentic product,” notes Jody Johnson (In the Heart of the Sea, Rush, The Pirates! Band of Misfits), who supervised the digital augmentation and clean-up of 1,800 shots. “Audiences need that from a Mission: Impossible film. Some of the sequences stayed at the storyboard stage while anything that was time and speed dependent or more technically demanding, we would previs as well.”

A key crew member was stunt coordinator and second unit director Wade Eastwood. Johnson notes, “I’ve collaborated with Wade before and he has also worked a lot with Tom Cruise, so the two of them know what they can achieve together and how to push the boundaries to get a thrilling experience for the audience.”

The photogenic streets of Paris served as the setting for a motorcycle chase and prisoner escape. “That was a once in a lifetime opportunity,” enthuses Johnson. “It was clear from the start that Chris, Tom and the stunt team were referencing classic films, like Bullitt. But in addition to that, they were setting it in such an iconic location which is exciting to look at, beautiful and so entrenched in history and romance. We had a limited time that the Parisian council provided us in each one of those vital locations, like the Arc de Triomphe and Avenue de l’Opéra. Visual effects was there so the crew could work quickly and efficiently. Sometimes we would clean-up rigs built by the special effects team led by Neil Corbould, or add additional cars in the background.”

It’s interesting to point out that most of the car crashes in Paris were not CG creations and took place in real life. “Tom provided plenty of destruction on his own! It was quite frightening at times. The M5 BMWs were bespoke cars that were chosen specifically for Tom to travel around and to crash into these iconic locations.”

One of the film’s pivotal action sequences involves a French police convoy transporting rogue MI6 agent Solomon Lane (Sean Harris) in a prison truck. They leave the Finance Ministry and are diverted onto the Quai d’Austerlitz, a waterfront location that runs along the Seine River. To make the scene work, special effects supervisor Neil Corbould built a rig that allowed Cruise to ram his truck into the side of the prison truck and into the Seine. 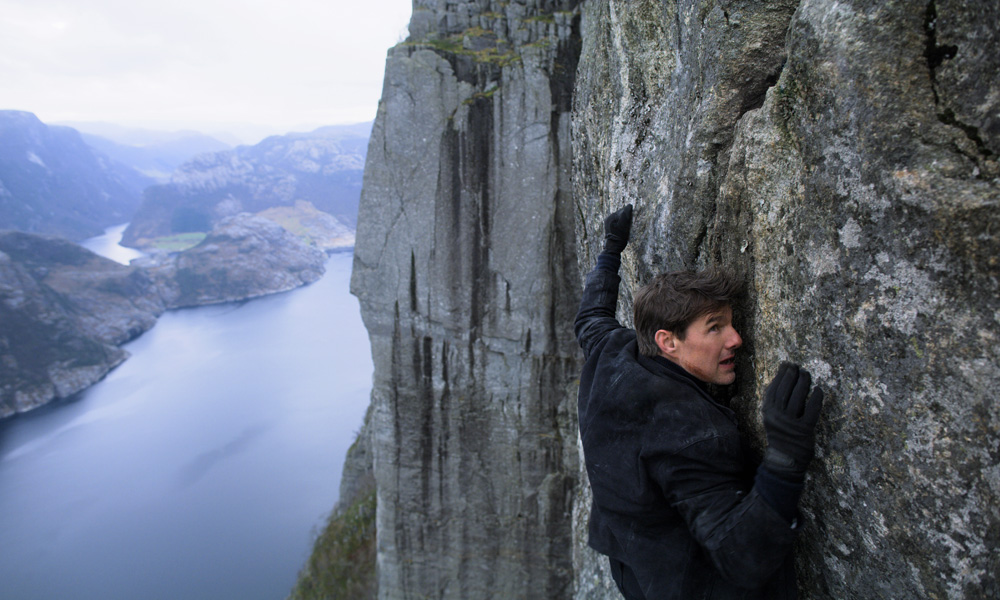 The action then shifts to a water tank situated at Leavesden Studios, an 80-hectare complex located in southeast England which was also used in Star Wars: The Phantom Menace, Edge of Tomorrow and the Harry Potter movies. “We go inside the prison truck with Lane, as it fills with water and rotates 360 degrees,” recalls Johnson. “Benji Dunn [Simon Pegg] comes in and releases Lane before he drowns. Water simulations allowed for the painting out of rigs that operated the prison truck and waves caused by camera boats. That’s one of the most brilliant sequences in the film.”

Johnson says using roto allows more freedom of lighting and camera angles. “There was some bluescreen work, but we tried to limit it,” he notes. “There’s nothing in the film that relies totally on CG. Some scenes have heavy augmentation, but whether Tom was flying or crashing a helicopter or jumping out of a plane, we always started with some live action and built on that.”

The action film’s signature helicopter sequences take place in New Zealand, which doubled for Kashmir. “New Zealand is one of a few locations that had that level of drama in the scenery as well as the facilities and skill base needed for the aerial photography,” says Johnson. The paths to be taken by helicopters were mapped out ahead of time. “I flew for a week with a six RED camera array bolted to the front of a helicopter to capture plate photography. It was awe-inspiring. We were flying over glaciers and through canyons. There’s a big helicopter crash at the end of the film which we shot with special effects rigs and Tom back in Leavesden Studios ,but that was based on a real location.” 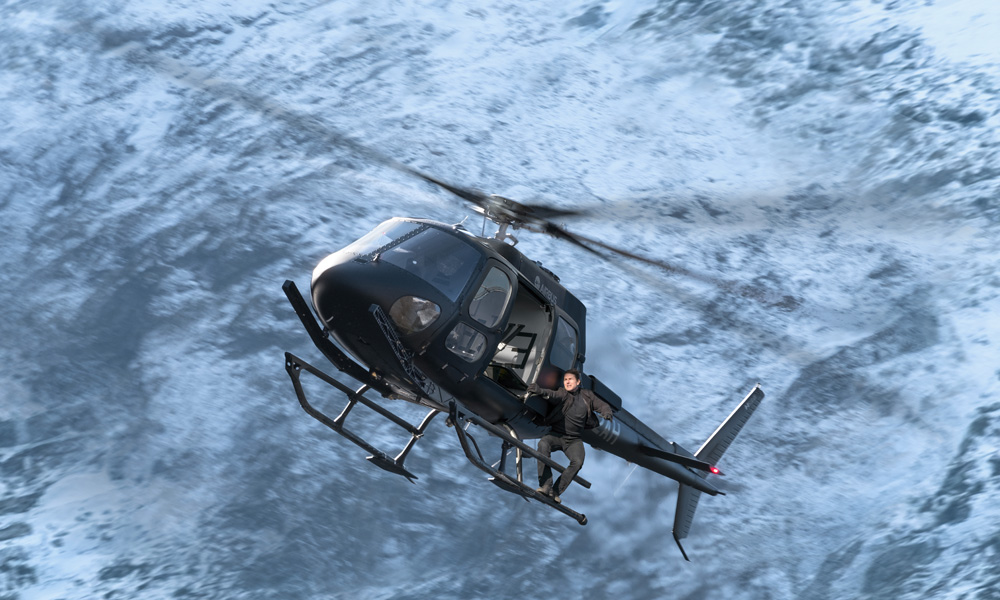 Cloud simulations and natural elements were added digitally. “While Tom is flying helicopters and acting, he can’t control the weather,” notes Johnson. “There were times where we had to augment story points with CG clouds or extra snow. When Tom leaps from a C-17 at 25,000 feet, he dives down into a storm to save Henry Cavill’s character (the CIA operative) who gets hit by lightning. That was a big challenge for us to provide photoreal clouds and lightning into the live action. Then as Tom comes out from the bottom of the storm, he was over Abu Dhabi, which needed to be changed to Paris.” 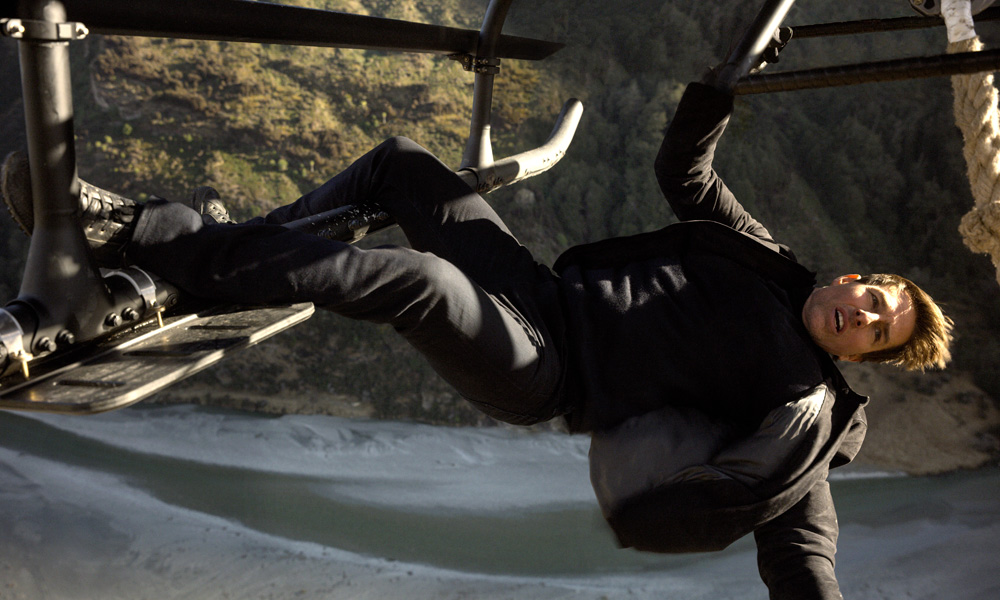 To help with the digital recreation of the French capital city, a drone was flown over the top of the Grand Palais and photogrammetry was shot of the iconic building along with the surrounding areas, including the Eiffel Tower and the Seine.

A brutal altercation in a bathroom was primarily stunt-based, with crew and cameras being painted out of mirrors as well as safety mats covering sharp edged tiles. Less straightforward was the much-talked-about rooftop sequence where Tom Cruise leaps from one building to another. 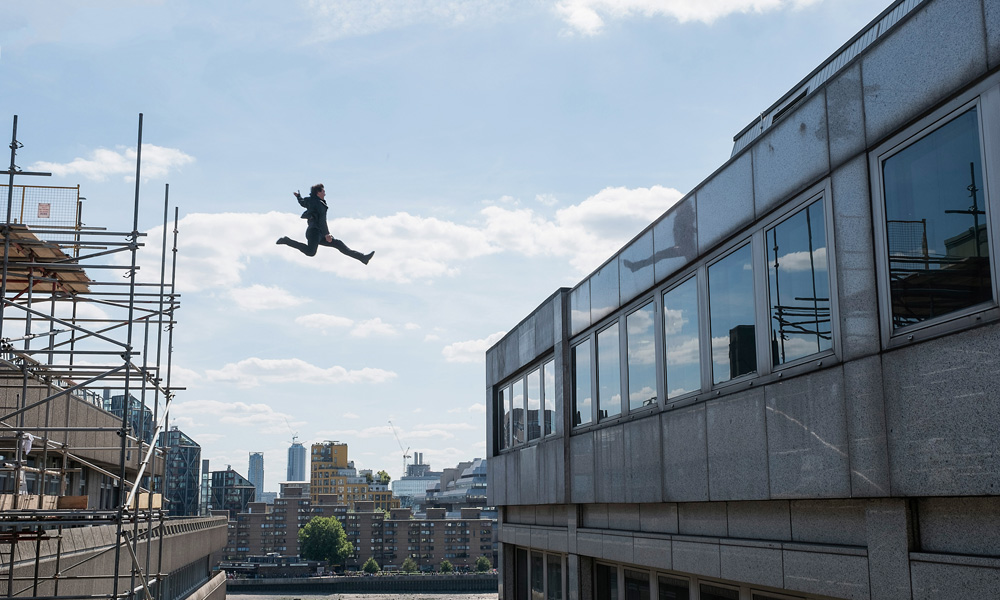 “In order to transfer Tom from his running rigging into the leaping rigging, we had to cut the action in the middle,” remarks Johnson. “Logistically we had to shoot the second half of the run first. We worked with the grip team and wire-cam team in regards to the path the wire-cam would need to take. Unfortunately, as Tom leapt 18 feet from one building to another, he broke his ankle. When we came back to shoot the first half after Tom had recuperated the weather had moved on. A completely different lighting scenario on the A side needed to be joined into the B side. We used a lot of compositing tricks and CG buildings to blend from an overcast day and into the sunny day.”

The scariest stunt involves Tom Cruise climbing a rope dangling from a helicopter at 2,000 feet, free-falling 40 feet and bouncing off of the payload being transported. “We were at a remote airfield in New Zealand and saw these uniquely skilled and trained pilots long-lining cargo from one remote location to another; that’s when Chris came up with the idea,” explains Johnson. “The long-line stunt was a mainly stunt based sequence with rigging and wiring teams. Chris’ mantra was, ‘If the camera is not in danger it’s not exciting.’ Painting out cameras and safety wires were our main work for the long-line sequence and helicopter chase.” 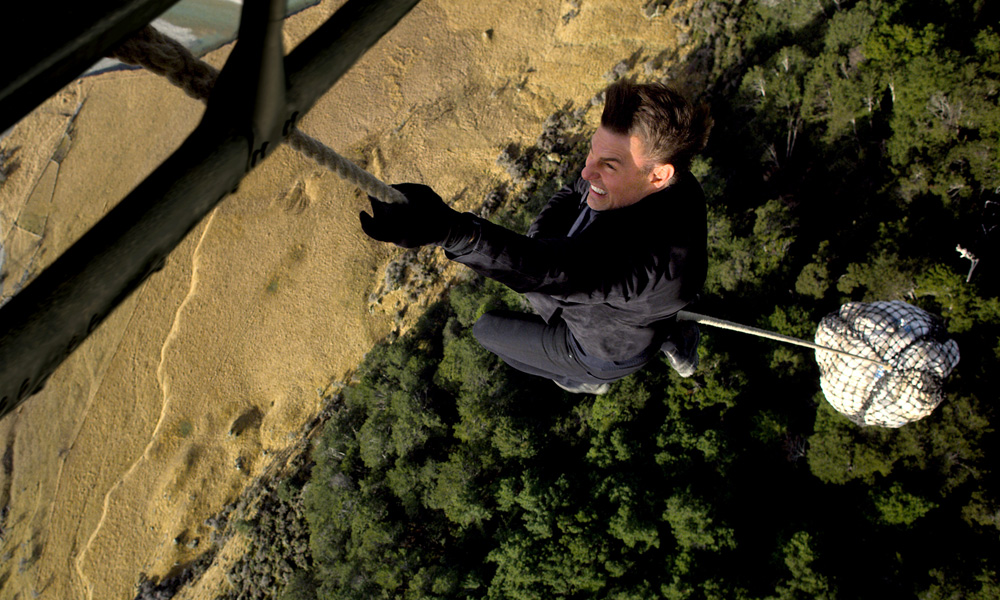 Digital doubles came to the rescue for the H.A.L.O. (High Altitude Low Open) jump. “There was a small window every day when we could shoot that scene. Tom did over a hundred jumps. What we did was pick the best pieces from each of those takes and weave them together. When two takes were joined together, that was when we used digital doubles to get us from one take to the next. The H.A.L.O. jump is an incredible coming together of all the different disciplines with the planning and training; that’s going to be a great experience for the audience.”

Paramount’s Mission: Impossible — Fallout is currently playing in theaters worldwide. As of Aug. 10, the movie has grossed over $360 million globally.