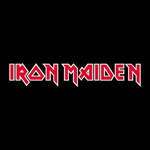 Following its recent release, Iron Maiden’s animated music video for “Speed of Light,” the heavy metal band’s first single in five years, has become a bona fide viral sensation. The five-minute clip, which features Maiden mascot ‘Eddie’ travelling through a variety of video game worlds, was produced in London over a six-month period. We caught up with director Llexi Leon, co-producer Yaya Leone, and animation producer Shiraz Liberman — of London VFX studio The Brewery — to find out how they pulled it off.

Animation Magazine: The “Speed of Light” video brings together heavy metal, video games and animation. How did that develop as a concept?

Llexi Leon: I wanted to take the viewer on a trip through the band’s forty-year history but without it feeling like a documentary. There was a parallel with video games, which have also been evolving over the last forty years, and as a fan of both heavy metal and video games myself, I knew there was a lot of crossover with the fan-bases.

Yaya Leone: Bringing metal, video games and animation together in this video meant having three tools of engagement, which was great. We needed to ask ourselves who this video really was for and how we could bring in a wider audience while keeping the spirit of the band and the fans at its core.

What kind of animation techniques or programs did you use?

Shiraz Liberman: For our 3D work we used Maya and rendered with RenderMan. All 2D work was done in After Effects, Nuke and Photoshop. We animated the 8-bit scene at the resolution of a game from that era, then scaled it up to HD to apply post effects like glows, pixel patterns and grain. The 16 bit sequence was designed in Photoshop and animated in After Effects. For Eddie and the killer robot car, we used a 3D render as a reference and painted pixel art over the top.

For each game style we doubled the resolution as the era got closer to modern day. The final game scene, the first person shooter, was almost entirely done in Maya and rendered in RenderMan. We used After Effects for the UI and the muzzle flashes. This was one of the easier scenes for us to pull off, actually, as the techniques used are very similar to the work we regularly do at The Brewery.

How did you give the video a cohesive feel despite the different types of animation styles used?

Liberman: We used the album artwork by artist Derek Riggs as reference for the levels’ design, making them identifiable as a part of the ‘Maiden universe’. I think the pieces fit together so well because of the tempo of the video; things are changing constantly so nothing feels out of place and our creative directors gave the video a color palette and a visual language which carried through.

Leon: Once we’d established the rules and logic of the video, that Eddie is entering classic arcade games, there becomes an expectation that we’re going to see each game world improve upon the last in terms of the graphics, and so the challenge really became finding innovative ways to blend each sequence in visually interesting ways but with a thread of similarity to the previous transitions. We relied on repetition of cues like the blue portals opening up at the end of each game, and applied various transitions to bring the viewer from a stylized 2D or low poly game world into more lifelike 3D animation.

Leone: Some of the story elements were designed to do just that: they re-occur, the viewer makes a connection and the different types of animation styles get unified with their conceptual similarity. We use storytelling techniques to draw attention to those elements, then it’s up to the viewer to play ‘connect the dots’, which makes it more fun.

Which was the most challenging part to animate?

Liberman: Definitely the transitions from Eddie flying through a wormhole to Eddie entering the different video game worlds. We wanted transitions to be smooth and interesting but at the front of our minds was making sure the narrative was clear and engaging. These scenes were difficult to storyboard so we devoted a fair chunk of time to getting the pre-viz right. The digitally illustrated assets used in the 8- and 16-bit segments of the video also took a long time to produce and were lovingly drawn from scratch, in Photoshop, by our pixel maestro Matt Hutchings. We had to create a coherent visual statement that would bring all the different elements together for the video to really work. The Brewery’s 2D and 3D creative directors, Marc Knapton and Rob Ride, were able to give everything a strong stylistic backbone which really brought the video together.

How did the production process work with the producers, studio, band and management?

Leon: Following my initial pitch, the band and their management were enthusiastic about the themes and tone I had in mind, so from that point on it was a case of whittling down decades of potential album artwork and game references into a narrative structure that could be conveyed in 5 minutes and on budget. Yaya and I refined the treatment and approached a few studios, but it was The Brewery we felt were most able to rise to the technical challenges the video presented. As we reached key milestones I would get approval from the band to make sure we were on the right track but once things started coming together they just let us get on with it!

As well as the numerous Iron Maiden and video game references, eagle-eyed fans have spotted nods to everything from Tron to Wreck-It Ralph. Which films/television shows did you take inspiration from?

Liberman: The whole team was given a chance to contribute something from their personal favorites. Stargate, Terminator, Indiana Jones, Tomb Raider, Dragon Ball Z and of course loads of Maiden references. It’s been really encouraging seeing such great reactions from fans, and to hear they’re scanning the video searching for all the Easter eggs. It makes all the extra time and effort spent on those little details worthwhile.

Leone: The truth is that we just wanted to include as many as we can. I mean, how often do you get to reference your favorite Iron Maiden albums and gaming history in a music video? Llexi prepared this huge bank of great ideas and references, the first thing was seeing which naturally work well with one another as the main themes and games in the story. After that, it was watching out for opportunities to drop in more and more nodes and Easter eggs to things we like.

Leon: All of the imagery in the video had to be 100% Iron Maiden, only reimagined to fit the form factor of classic video game genres. Many of the band’s early album and single covers reference the popular culture of the time so we followed a very similar thread with our approach to this video. It’s equal parts parody and tribute – there’s a lot of love for the original Iron Maiden artwork, and a similar nostalgia for classic platformers, fighters, side scrolling shooters, and more. And yes, there are definitely nods to Tron and Wreck-It Ralph, as well as Bill & Ted’s Excellent Adventure, which is a personal favorite of mine, with the wormhole sequences.

Video games seem to a popular topic right now and the video has been – favorably – compared to Adam Sandler’s Pixels. Were you aware of the movie and did it influence your work at all?

Leon: I actually haven’t seen [Pixels] yet, but I think it’s easy to rely on well-loved characters to bring people in, and there’s nothing wrong with that in principle. The hard part is doing those characters justice and capturing the essence of what drew people to them in the first place. We went out of our way to pay tribute to a number of classic games that were staples of our youth. Beyond referencing iconic gameplay genres, we attempted to recreate the aesthetics of specific eras of gaming, recreating the animation styles of the day with similar limitations – even adding scan lines and a CRT monitor glow to individual pixels in the earlier gaming worlds – evoking that feel of playing Nintendo on a chunky old TV in the living room, and I think that’s what fans have responded to.

Liberman: We’ve been so busy with the video that none of us had any time to watch the film! I suppose the style is so full on that it works best when it’s fast and furious. ‘Speed of Light’ is such a powerful track it makes for a really awesome five minutes. We paid a lot of attention to synchronizing the video to the track, really letting the song direct where the animation should go. Maybe Pixels could have benefited from a heavy metal soundtrack! 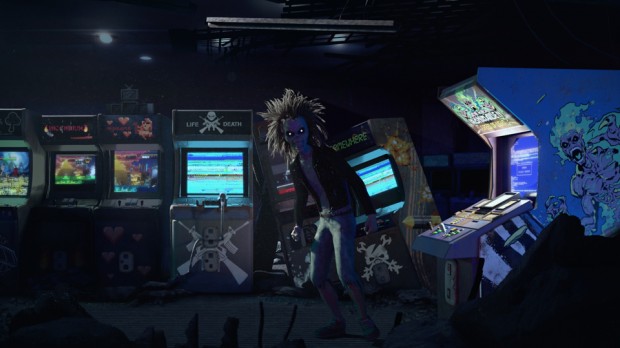 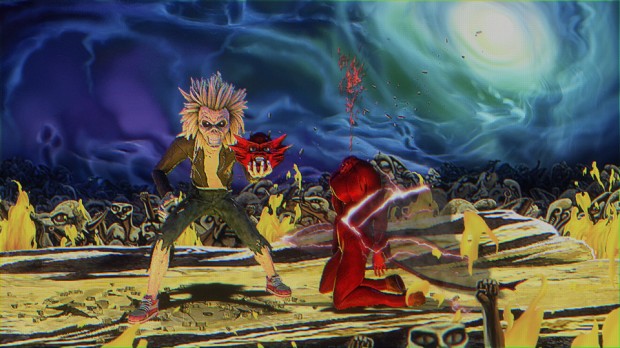 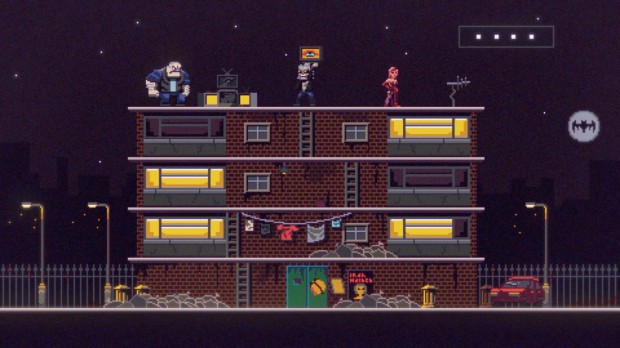 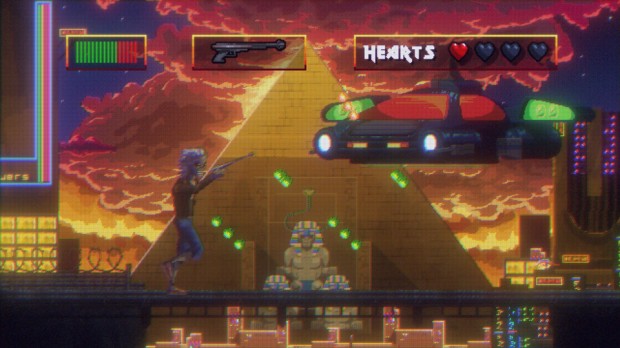 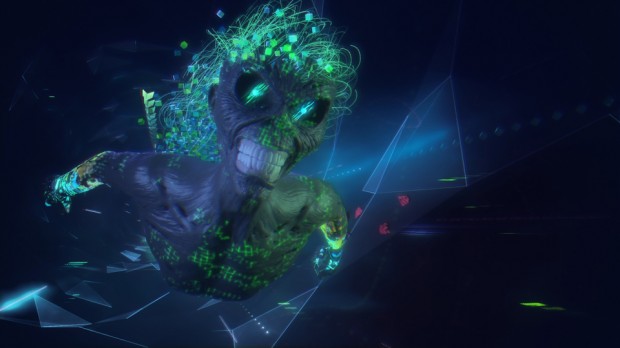