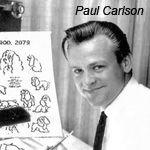 A number of years ago, while working for Disneyland, I was allowed to hear a surreptitiously-made (and archived) tape of a recording session with Walt Disney. After muffing his lines, Walt began to swear like a sailor, then stopped and asked: “You’re not still recording this, are you? ‘Cause I don’t want ’em to hear me cussing.” Another voice was then heard saying “Oh, no, Walt, it’s off…”

The point of this is that for the last decade of his life, Walt Disney was thrust into a whole new role: that of Honorary Uncle to millions of kiddies as host of the Disneyland television show (later Walt Disney’s Wonderful World of Color). It was a role he apparently found somewhat uncomfortable. Back in 1993 I spoke with veteran animator and producer Paul Carlson, who in the 1950s worked as assistant to C. August “Nick” Nichols. Nichols, unlike most of the staff directors at Disney, had a DGA card which meant he could handle live-action projects, including those filmed intros of Walt’s for the TV show. “[Walt] was not wanting to do the intros when they first started the show,” Paul told me, adding:

“From what I heard, when they first designed the show [Disneyland] for ABC, everybody wanted him to do it. It was a natural for him to be the MC. He didn’t really want to do it cause he was really kind of shy. If you looked at some of that stuff, he just barely made it in the beginning. He was very self-conscious, and he made a lot of mistakes. He’d get mad and he’d swear. It was really a shock to me, cause I was a kid. I was only in my twenties and I always looked up to him. Oh, boy, he used to swear a blue streak. But he was really a good guy, I liked him a lot.” 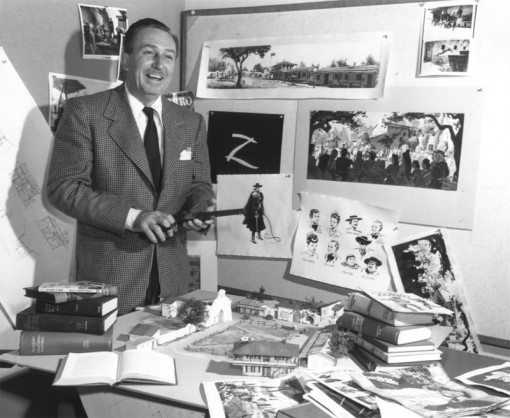 Paul recalled one instance in particular when Walt was concerned over his physical appearance:

“We shot intros with him having a gun, and he was talking about Elfego Baca [for the 1958 film The Nine Lives of Elfego Baca]. He was standing behind this desk and there were some guns and a cartridge belt. And Nick, the director, wanted to show what was on the desk. Before Walt got on the set we propped the back of the desk up with blocks. The camera angle was improved by the back of that desk being up about six inches. But when Walt got in there, and he stood behind it, he noticed that that desk was high. He said, ‘That makes me look short.’ He didn’t like that. Nick explained to him what we were doing and why, and he went along with it after he knew what we were doing. But he was pretty particular about the way he looked. He said, ‘People will think I’m short, and I’m not!'”

Purely for the record, Walt stood 5’10”. Paul also recalled that the Baca intro required thirty-one takes, due to Walt’s blown lines. And, probably, a fair amount of swearing. 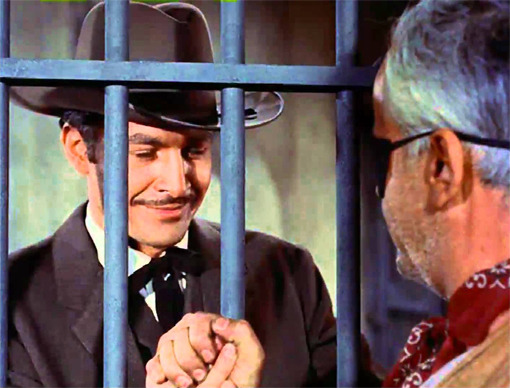 The Nine Lives of Elfego Baca