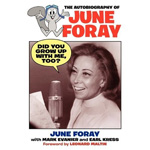 I have written several times before in this blog about the amazingly talented June Foray, but the astonishing thing about June is that after some seven decades in the business, she is still piling up new achievements about which to write!

As I type this, June has just received the Governor’s Award at the Primetime Creative Arts Emmys. That comes after her winning her first competitive Emmy in 2012 for The Garfield Show. In a few days she will be celebrating her birthday and a few days after that making an appearance at a screening of Chuck Jones’ 1970 feature The Phantom Tollbooth, in which she plays three roles, at the American Cinematheque in Hollywood.

Fans, of course, know June as “Rocky, the Flying Squirrel,” Tweety’s owner “Granny,”
“Natasha Fatale,” “Nell Fenwick,” “Cindy Lou Who” from How the Grinch Stole Christmas, George of the Jungle’s “Ursula,” “Magica de Spell,” “Grammy Gummi,” Twilight Zone‘s “Talky Tina” and scores of others characters that I cannot list here because I have a finite word limit. Friends, and they are legion––in fact, with the passing of her friend Ray Bradbury, June may have inherited the mantle of Universally Known Person––know her as a delightful, warm and generous human being.

Way back in 1994, during one of the many interviews I’ve conducted with June, I asked her what it was like to have so many fans approaching her everywhere she goes. “A lot of people ask me trivia questions,” she said, adding:

“But we did about three-hundred-fifty Bullwinkle shows and there were over seven-hundred segments. People come to me and repeat lines, and I don’t even remember them because we did so many. But wherever I go, festivals or speaking engagements, some person, a male, always comes up to me and says, ‘Hey, Rocky, watch me pull a rabbit out of my hat!’ From New York to Chicago to La Jolla to San Francisco, you’d think there was an underground saying, ‘When you see June, say that!’ So I always have to say, ‘But that trick never works!’ Another expression I hear is, ‘I grew up with you.’ You’d think that these people communicated with each other and said, ‘This is what you say when you see June.'”

And this was before social media! June turned the tables on all those questioners by titling her 2009 autobiography, Did You Grow Up with Me, Too?

What I had not remembered until looking over the transcript of our conversation was that June’s autobiography had already been underway when we spoke 19 years ago, under the potentially titles Where Have I Heard That Voice or There’s a Horse in My Living Room (now that must be a story!). Work on the manuscript was interrupted by the Northridge earthquake, which hit in January 1994, and created havoc all throughout Los Angeles––including causing June’s water heater to overflow and drench the pages.

While publication schedules might be impeded, nothing can stop the legendary June Foray. Happy Birthday to the First Lady of Animation, and may many more honors come!

We are honored to announce that the amazing June Foray will receive a special Lifetime Achievement award at Animation Magazine’s 2013 World Animation and VFX Summit on November 3rd at the Marina del Rey Yacht Club in Los Angeles. For more information, visit www.animationmagazine.net/summit. 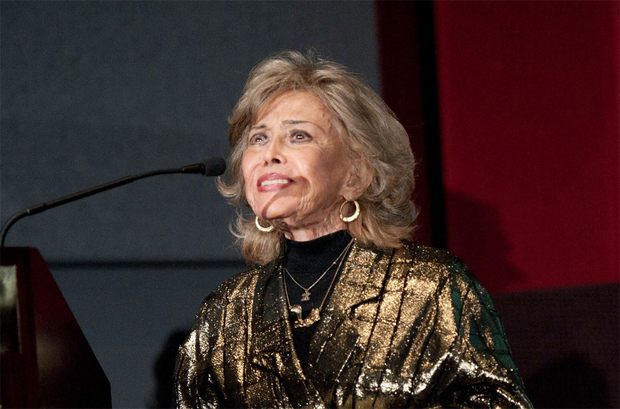 You may also like...
Related Topics:American Cinematheque, Bullwinkle, Chuck Jones, Creative Arts Emmy Awards, Did You Grow Up with Me, How the Grinch Stole Christmas, June Foray, Ray Bradbury, The Garfield Show, The Phantom Tollbooth, There's a Horse in My Living Room, Too?, Twilight Zone, Where Have I Heard That Voice