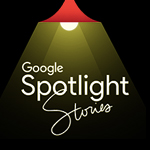 Directed by Scot Stafford and Chromosphere and produced by Camille Cellucci, Sonaria follows two constantly changing creatures flowing from one life-form to another in an immersive world crafted out of abstract visuals and a layered, detailed sonic landscape. The project employs the latest audio technology, utilizing object-based emitters and motion simulation, immersive acoustics and binaural playback, allowing the viewer to locate a sound in space precisely and the sound to dynamically adapt to the viewer’s movement, in high fidelity and in real time.

GSS also announced that the recently released VR short Son of Jaguar from Book of Life director Jorge Gutiérrez has expanded its release to Viveport, iOS/Android and YouTube Kids, following its initial launch on Pixel 2 and Steam.

The teams from Sonaria and Son of Jaguar are both participating in demos and panel discussions at this weekend’s CTN Animation Expo in Burbank.

Read more about Sonaria and Son of Jaguar here.