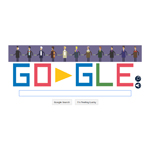 To celebrate the 50th anniversary of sci-fi cult phenom Doctor Who, Google has unveiled a special interactive Doodle. The animated Doodle pits the long-running show’s 11 galaxy-hopping Doctors against the evil Daleks. According to The Guardian, the special Doodle (which is also known as the “Whodle” at Google) was created by a team of six staffers, led by full-time Doodler Matthew Cruickshank, who also created the much-lauded Saul Bass Doodle, as well as one celebrating the anniversary of the London subway system.

“It’s the first game that I’ve designed,” Cruickshank told The Guardian. “But it’s the technicians and programmers that actually make the game. I just art direct, create the assets, set the visual tone, design the characters, and then do pieces of animation.”

Doctor Who fans are also treated to a special 75-minute anniversary episode, which will be broadcast simultaneously in almost 80 countries (including BBC America in the U.S.) Die-hard fans can also enjoy a 3-D screening of the episode in movie theaters around the world. The BBC will also premiere a TV movie about the origins of the show titled An Adventure in Space and Time (Thursday in the U.K. and Friday on BBC America).