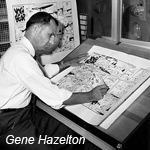 Some things stay with you for a lifetime. When I was a kid I read a Yogi Bear comic strip in the newspaper in which Ranger Smith punks Yogi by filling his enormous Christmas stocking with an enormous artificial foot. It sounds like a simple, obvious gag, but the memory of it has stayed with me forever because I could not stop laughing at Yogi’s I’m-about-to-be-sick expression as he pulled out the foot.

The Hanna-Barbera strips were the province of the late Gene Hazelton, who served as art director for them (though Bill Hanna and Joe Barbera received the byline for work done by Gene, Harvey Eisenberg and Iwao Takamoto, among others).

Most people who toiled in the Toon Trenches of the Golden Age had a specialty, or were at least known for their work with a particular studio. Not so with Gene, who began his career at Disney’s in the late 1930s, then moved to Schlesinger’s after the strike, and then went over to MGM. His job descriptions were equally variable, particularly at MGM, as he told me in 1998:

“I had a very interesting job. I was a roving guy. I wasn’t specifically attached to one unit or the other. I would do whatever they asked: work with Tex [Avery] or Bill and Joe, or do publicity work, or models, or layouts. I did a lot of things, which was very lucky, incidentally. My whole career has been like that. I wasn’t a guy who was assigned to just one unit. A lot of times on the main lot they would have a feature production, a live-action thing, and they would want a title for something, and the studio would call me in to do that.” 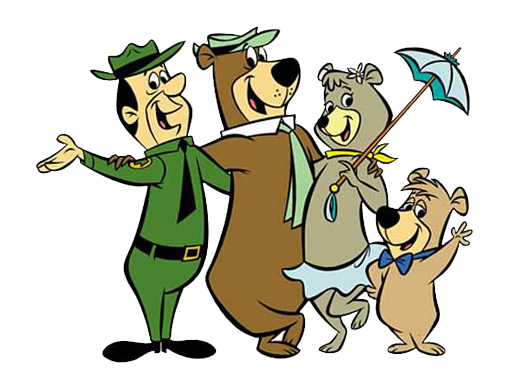 After MGM closed in 1957, Hazelton moved into commercials and then joined the newly formed Grantray-Lawrence, where he did layout, design and storyboards. So how did he transition into newspaper stripping?

“Bill [Hanna] would call me and say, ‘Look, would you like to some work for us?’ Well, when we slowed down on TV [at Grantray] I would do some layouts or models for [Hanna-Barbera]. But I wasn’t quite happy with TV. I’d had some experience in the comic strip field, and McNaught Syndicate wanted me to start the comic strip department with Hanna Barbera. I didn’t know if I wanted to go, so I said, ‘Look, I’ll do this on the side.’ Well, the syndicate made me a pretty good deal and I finally decided to quit Grantray-Lawrence—on good terms, I might add. I went over to Bill and Joe and I handled the Yogi Bear comic strip. It started February 10, 1961, the day my youngest son was born. Then I got into doing the Flintstone daily and Sunday stuff, I produced that for a long time.” 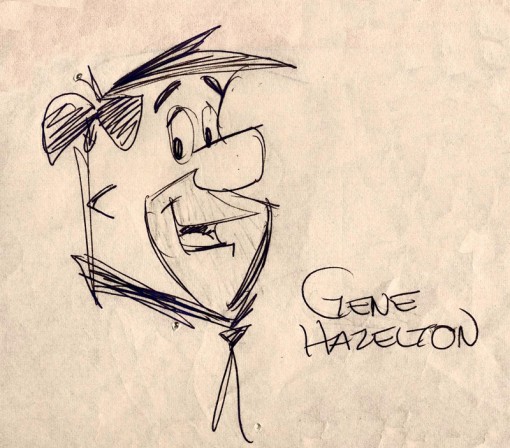 Gene was retired when I spoke with him in ’98, and he passed away seven years later at the age of 85. Animators may have been required to turn out so many feet a week, but it was that one foot turned out in a strip so many decades ago that remains etched in my memory.