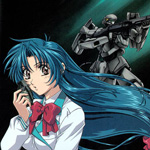 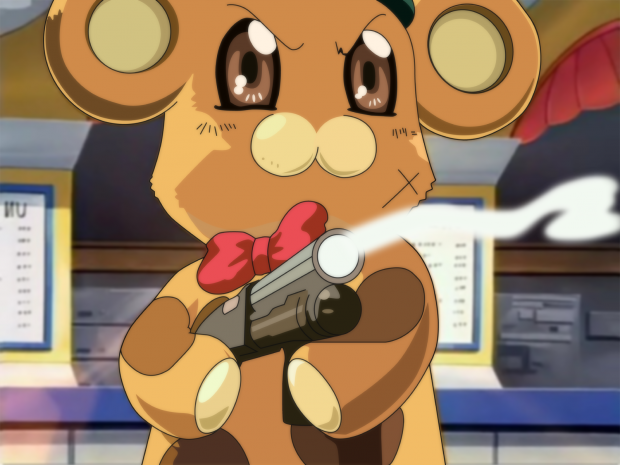 Writer Shouji Gatou and director Koichi Chigira somehow blend the disparate elements of mecha battles, magical girls, slapstick comedy and a teenage romcom in the entertaining series Full Metal Panic! (2002). Although the winning comedy-adventure scored a hit in both Japan and America, it zigzags wildly in tone and content. The first and third seasons are more dramatic and violent, while the second “Fumoffu” segment is just plain silly.

High school student and class representative Kaname Chidori may be a “Whispered,” an individual who possesses formidable psychic powers. The KGB and even more sinister organizations want to exploit those powers, so the anti-terrorist mercenary corps Mithril dispatches a mismatched trio of officers to protect her: Melissa Mao, Sousuke Sagara and Kurz Weber.

Sousuke tries to blend in at Jindai High, but his efforts to pass as just another kid make a fish out of water look calm. Raised by Mithril in war-torn Helmajistan, Sousuke has been trained in guerilla combat since he was eight. He’s a skilled, deadly fighter when he needs to be. But his military bearing, hair-trigger reflexes and terminal literal-mindedness invariably land him in trouble with Kaname.

Assertive, independent and capable of initiating action, Kaname represents a new breed of magical girl. She doesn’t whine like Hitomi in Escaflowne or bumble like Serena in Sailor Moon. A scream seems to be her normal tone of voice, and she’s quite capable of giving Sousuke a hit upside the head when he commits his umpteenth faux pas.

Season one builds to a deadly confrontation when the Helmajistani terrorist Gauron commandeers the Mithril submarine Tuatha de Danaan. The telepathic bond between Commander Teletha “Tess” Testarossa and Kaname enables them to recapture control of the powerful vessel. Sousuke leads the counterattack, which builds to a mano-a-mano duel with Gauron. In the climactic mecha knife fight, Sousuke also draws on Kaname’s psi powers. Chigira juxtaposes that duel with impressive CG scenes of the Danaan breaching like a humpback whale.

From Hamster to Hero

For the second season, Fumoffu (2003), the filmmakers dropped the mecha and magical girl elements to focus on the mismatched romance between Kaname and Sousuke, with hilarious results. Sousuke infiltrates a local amusement park by disguising himself in a plush walk-around suit of their mascot Bonta-kun, who looks like a giant hamster. His hard-hitting martial arts attacks make a wonderfully absurd foil for the character’s super-cuteness: Imagine Pikachu playing Rambo. When nearsighted karate champion Issei quarrels with Sousuke, they accidentally punch out the janitor during their fight. Ordered by the school president to assist their victim while he recovers, they nearly destroy the school in a bout of competitive nurturing.

The darker third season, Full Metal Panic! Second Raid (2005), picks up about two months after the first adventure and ignores the farcical comedy of Fumoffu. Gauron, the murderous terrorist Sousuke battled aboard the Danaan, reappears in China. Director Yasuhiro Takemoto sets a major mecha battle in a tunnel beneath the Yangtze River to create a sequence that is simultaneously dynamic and claustrophobic. As the threat from Gauron grows more dire, the Mithril commanders order Sousuke to pilot the super-mecha Arbalest; the sinister-sounding Wraith will take over protecting Kaname.

For the first time in his life, Sousuke has to make a choice: obey orders, as he always has; or follow the first genuine emotions he’s experienced. Kaname uses every trick she knows — including a few she learned from Sousuke — to outwit Wraith and expose the assassin who’s stalking her. Sousuke confronts the sadistic Gauron and his own twisted past as a child soldier in a largely deserted Hong Kong. After Kaname knocks some sense into his head (literally and figuratively), Sousuke emerges as the hero the crisis demands. He rides to the rescue in a nick of time, piloting a mecha that levels everything in its path.

As the voice of Sousuke, Chris Patton shifts from despair to righteous fury to hilarious confusion; as Kaname, Luci Christian matches him mood swing for mood swing. They rank as the most fractious anime couple since Ranma Saotome met Akane Tendo in Ranma ½ — and the most fun.