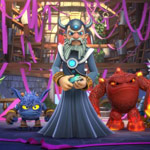 How Skylanders Academy avoided the curse of many gaming franchises and became a show loved by both fans and Netflix bingers.

It’s a commonly held belief that developing a hugely popular game franchise into a well-crafted animated series is not a job for the faint of heart. The team behind the Activision/Blizzard Netflix show Skylanders Academy will tell you that top-notch writing, artistic talent and an awesome animation studio are the essential ingredients to make a show like that really takes flight.

The colorful and well-received series, which has been renewed for a third season coming to Netflix in 2018, follows the adventures of ragtag group of heroes, assembled together by Master Eon to fight the evil plans of Kaos and Doom Raiders. Featuring a top-notch voice cast that includes Justin Long, Ashley Tisdale, Jonathan Banks, Bobcat Goldthwait, Norm Macdonald, Harland Williams and Felicia Day, the second season of the show introduced newcomers Cynder and Sprocket and found the heroes searching for answers about their past and fighting a powerful new adversary. (Recurring voice actors include Parker Posey, Susan Sarandon, James Hetfield, John DiMaggio, Catherine O’Hara, Jim Cummings, Billy West, Jason Ritter and Billy West.)

So how did this successful show escape the common pitfalls of the game-to-TV show development process? “Like a lot of Hollywood success stories, it all started with a phone call,” recalls show runner and exec producer Eric Rogers. “Activison and Blizzard called my agency because they wanted a writer to develop this property. After I met with industry veterans Sander Schwartz and Nick van Dyke, we decided to build the show around five main characters. They were looking for the same vibe as Professor’ X’s School for Gifted Youngsters.”

Rogers, who has written for shows as diverse as Futurama, Teen Titans Go! and Brickleberry, immersed himself in the Skylanders game and toys and came up with answers to questions like this is why you’re going to love Spyro the Dragon and this is what Chaos is about. “I think these characters are amazing,” Rogers points out. “The design and animation is fantastic. What was really appealing to me was that we could give each of these characters their own unique voices, likes, dislikes and fears. The relationships between the characters are very important to us. The relationship between Chaos and his mom is a big part of the show.”

Building a believable villain in the scheming portal master Chaos was another highlight. “Chaos is only a moustache twirler in the game, but in the TV series, we wanted more. You want to see why he became this dark dude, kind of like Walter White in Breaking Bad!” notes Rogers. “I had to reverse engineer Chaos, so we could see why he became this bad guy and why does he want to ruin Skyland?”

One of the biggest challenges for the creative team was creating the overall tone of the series. “Our goal was make it kid friendly so that seven to 12-year-old viewers would like it, but we wanted it to also appeal to their older brother and sister, and for parents to sit down and have a laugh as well. It was really about going for this sense of humor and sophistication, so a wider age group could enjoy the storytelling and the characters’ arc. I think that’s why Nick and Sander found me appealing as a writer, because I came from Futurama. I started out as a writer’s assistant on that show, which for me was the Harvard of comedy writing. That DNA is also part of what we brought to Skylanders Academy.”

Veteran animation industry exec Sander Schwartz agrees. “Skylanders offers a very rich world of characters that come out of a gameplay that is first of its kind in the toys to life category,” he notes. “Taking these characters that were created by the experts at Activision Blizzard was a great opportunity and presented a chance to offer fresh, exciting action adventures. The storytelling in this world that was created under Eric’s supervision is really compelling, and the animation that was produced by TeamTO was stunning and helped create quite a beautiful show.”

Skylanders is also one of the most ambitious series produced by TeamTO, the French studio behind such shows as Angelo Rules, PJ Masks and Princess Sophia. “We started working on the show in 2015 and have produced 26 half-hours and are currently working on the third season,” says studio founder and CEO Guillaume Hellouin. “Every episode of the show is quite sophisticated and is almost feature film quality. We have a large number of characters, lots of crowds, high-end visual effects, elaborate lighting—and it’s all done in a fast-paced schedule. You have to deliver one episode each week, and thankfully, we have the budget and great partners to stay on schedule.”

Rogers says working on the second season of the show has been quite a blast for him and his team of writers. “We got to dig deeper in the characters and their back stories,” he notes. “Spyro made this epic decision to turn against his mother and join this supervillain league. He has been told by Master Eon that he’s the only one of his kind that exists, that he’s the golden child. Why does he need to carry that burden? That is the fun of having a second season because the characters are there already, and you can dig deeper.”

Since the series doesn’t have a traditional writers’ room, Rogers and his script coordinator Brittany Jo Flores figure out the season’s main storylines and use a team of talented freelancers to deliver the episodes. “It’s a long process,” says Rogers. “We started writing season two in June of 2016 and I don’t think we delivered the final lock until April or May of 2017. We look at about a ten-month process from start to finish. Then we had from June to October to get the 13 episodes done. Right now, the writing for the third season is all finished, and we’re deep into the animation for that season.”

Rogers and his team have been quite pleased with the way fans have embraced the show. “I am a Twitter guy, and I banged the drum pretty hard when the show first premiered,” he notes. “I am not trying to exaggerate here, but we’ve received almost 99 percent positive feedback. It’s been also quite fun to see how everyone reacts to the finale of our second season. The jaw-dropping effect that we wanted to see was happening.”

The serial nature of the show on Netflix has also allowed the show’s creators to reward the binge-watchers. “We knew about eight to 10 episodes in the first season that we were going to air on Netflix, so we reworked the show to have more of a serialized thread,” explains Rogers. “We were able to make it a really connective show and sew it all together. I think one of the most important lessons we can learn is that the comedic side of the show is just as important as the action elements. It has been such a fun ride and has opened so many doors for us.”

The first two seasons of Skylanders Academy are available for streaming on Netflix.

Meet the Big Bad Fox and Other Tales
MGM Sets ‘Addams Family’ for 2019; Oscar Isaac in Talks for Gomez