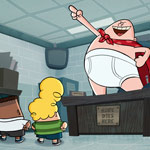 An exciting world of pranks, supervillains and the world’s greatest pants-less superhero is about to unfold in the Netflix original series, DreamWorks The Epic Tales of Captain Underpants, premiering July 13. Get to know the new multi-technique animation in the opening sequence released Wednesday, down below.

Author Pilkey is pleased with what Peabody and Emmy Award-winning exec producer Peter Hastings (Kung Fu Panda: Legends of Awesomeness) and his team have done with his story world.

“I binge-watched all of the episodes in one afternoon… I couldn’t help myself. Peter Hastings has totally captured the craziness and heart of the Captain Underpants multiverse and I hope everybody will love the show as much as I do. Kids have been asking for more Captain Underpants books for years, and to me it feels like we are getting brand-new books — except they’re animated!”