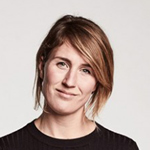 In Dutch animator Marlies van der Wel’s magical 12-minute short Jonas and the Sea, viewers follow the lifelong journey of the titular character as he follows his passion: to be one with the enchanting world beneath the waves. He grows up combing the shoreline for useful, washed-up items that he uses to build his outlandish submarine inventions, until he is an old man faced with the reality that time is running out to make his dream come true.

Now available on Vimeo, having made its online premiere via Short of the Week, this poetic film initially premiered at Berlinale and was selected for Sundance last year. Jonas was produced by Amsterdam- and Berlin-based HALAL, and was a multiyear labor of love for van der Wel, which involved endless hours of beachcombing to find flotsam suitable for her photocollage-style animation. We were lucky enough to hear from the filmmaker, who cites groundbreaking Dutch animators like Paul Driessen and Michael Dudok de Wit among her inspirations, about the project. 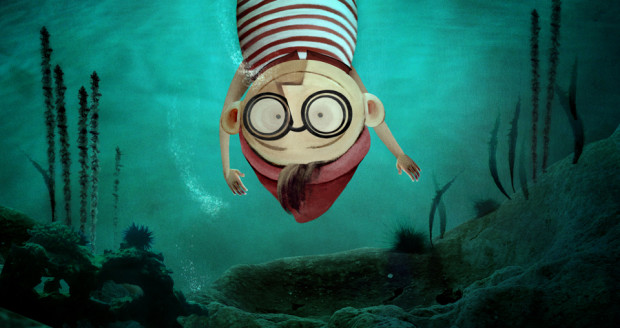 Animation Magazine: Tell us a bit about the origins of Jonas and the Sea.

Marlies van der Wel: I wanted to follow a character through a lifetime; someone we see growing from a child bubbling with enthusiasm, to an adult who has a clear idea of who he is and what he wants to achieve.

It all started with a rough sketch of a little boy with a fishbowl on his head, wanting to engage with the sea and all its wonders. I then started to think about what story this image would communicate: a sea covering a hidden, undiscovered world and a boy who will never be able to go there, because he is human and humans belong ashore. Not all dreams can come true, but having a goal, something that gives you purpose, that’s what I wanted to communicate. Even though Jonas’ quest is filled with setbacks, it doesn’t stop him from trying.

What are some of your major inspirations?

In general, I like to address big themes by putting them in small packages – taking apart universal, existential questions through an expressive visual language. I always aim to create stories that people from all paths in life feel touched by. Regardless of age, nationality, gender – stories that are meaningful. It’s important to me to do this in a light-hearted, non-moralistic way. Humor, clumsiness and vulnerability are tools I like to use in my visual language to bring to life these stories in an approachable way.

Jonas and the Sea was inspired by the sea and its symbolism. The sea is so endless, a life-giving element that we as human are completely dependent on. Being by the sea often urges people to reflect on the big questions in life. For me, that was the trigger to explore the underlying theme of the movie, which in many ways is the quest of realizing one’s lifelong dream. Fulfilling one’s desires, even if this is something as far-fetched as living in the sea. 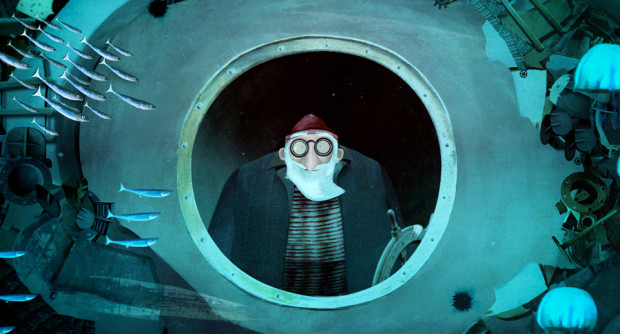 How long did the whole process take? Did you have any help with the production?

From beginning to end it took about five years. I know… for a 12-minute film! People would fall in love, move in together and produce walking children by the time I was finished. It probably took so long because of the technique I use, and the fact that I do most things myself. It was a lot of research involved, and at times I had to acquire new skills in order to serve the film justice.

Even though I of course had help, and the film was produced by HALAL and I had a wonderful line producer, I really dive into my work and it becomes all-consuming to me. I drew and animated every part of the 150 shots myself. Each shot began with a pencil sketch, and the backgrounds created with photographs from my research trips to the Dutch coastline. All of this combined into a collage from which the animation of the final artwork was based on.

What would you say your biggest challenge was in making the film?

My way of working can be quite isolating. Almost lonely. So the main challenge was to not get too obsessed with whatever phase I was in and focus on the bigger picture. That can be hard, so at times I really had to push myself to stay positive and have faith in the project. 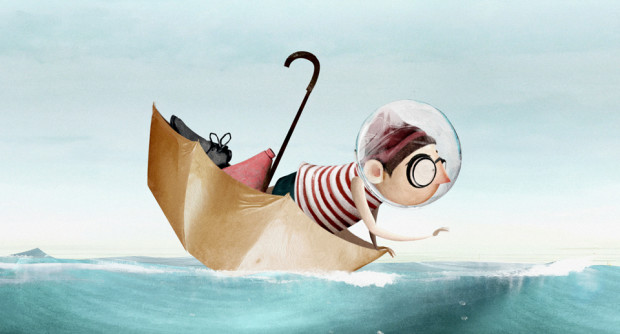 Why work with found objects?

I love how objects that initially appear to be waste, can get new meaning in combination with other elements. It’s what I do with my collages, and it’s also what Jonas does with the objects he collects.

In the film, one can see how the fishing industry grows year by year, taking more and more from the sea. Alongside this industrial development, there is also growing waste. Jonas uses this waste. He collects it, and the waste becomes tools for him to reach his dream. It’s a give-away for the audience I very much hope they’ll reflect on: be aware of what we take, what we use, how we pollute, and what could be done differently.

Did you find anything surprising while you were out beachcombing?

I mostly found driftwood, pieces of rope, rubber gloves, shoes… I was staying at Terschelling, a very little isle in Holland, surrounded by sea. The isle has a history of floods, and the entire village is focused on the sea; how it gives and takes. They have an entire museum filled with the weirdest stuff that washed ashore, it was heaven for me! Piles of shoes, antique rain barrels, a toilet, a door, lots of bottles (all with a message inside), entire parts of ships. A leg [prosthesis] was my favorite find, I did use it for the big fish at the end of the film!

The best story I heard was from a few years ago, when a sea container fell from a ship and hundreds of shoes washed ashore. The whole Island was wearing new shoes! 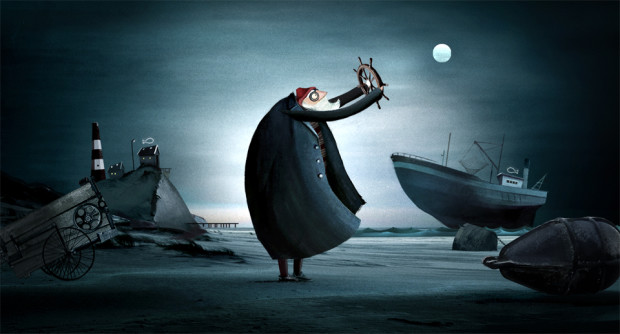 How does it feel to finally release your film to festival audiences and, now, online?

I felt relieved. Although I was proud, there was also almost a sense of “I can’t look at this anymore.” But, all in all, I am of course extremely happy to be sharing this story with the world – that’s my drive in the first place.

In the festival circuit my film was often places in the Children’s track or program. At first I found this frustrating, but mainly because of the principle that animation doesn’t necessarily need to be put in the “children’s section.” That being said, there’s no better audience than children – brutally honest in their reactions, if they don’t like it they will stop watching. They are perhaps the most sincere audience there is. Not long ago I received a note from a father in China, who told me that his son was in love with Jonas and the Sea and would recite it in Chinese. Apparently, his son shares Jonas’ dream of living in the sea. To me, messages like that give the biggest satisfaction.

Are you working on anything at the moment?

I’m currently working on another animated short set to premiere this fall. In a nutshell, it’s about an elderly florist. Looking back at her life and all the flowers she’s given, she’s wondering when it will be her time to receive a bouquet. The film also challenges this notion of depending on other people for one’s own happiness – taking charge of your own destiny and not relying on other people for fulfillment. 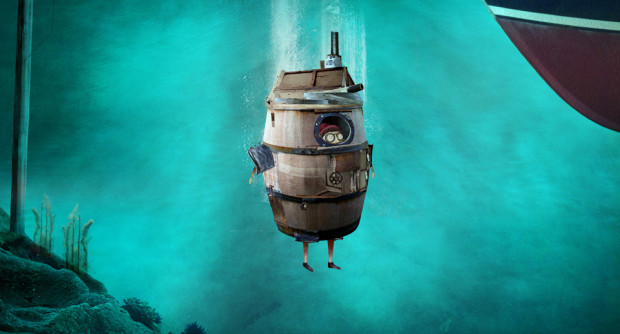 What is the best advice for success you can give to other animators?

Never let the fear of not being good enough hold you back, especially if you want to make a short film. Just dive into it and stay focused. Tailor your work experience to add the skills you need, and start building your own “big fish.”

See more of Marlies van der Wel’s work at www.marliesvanderwel.nl. Check out the trailer for Jonas and the Sea below. Watch the full short for free on Vimeo here.

This interview was edited for length and clarity. 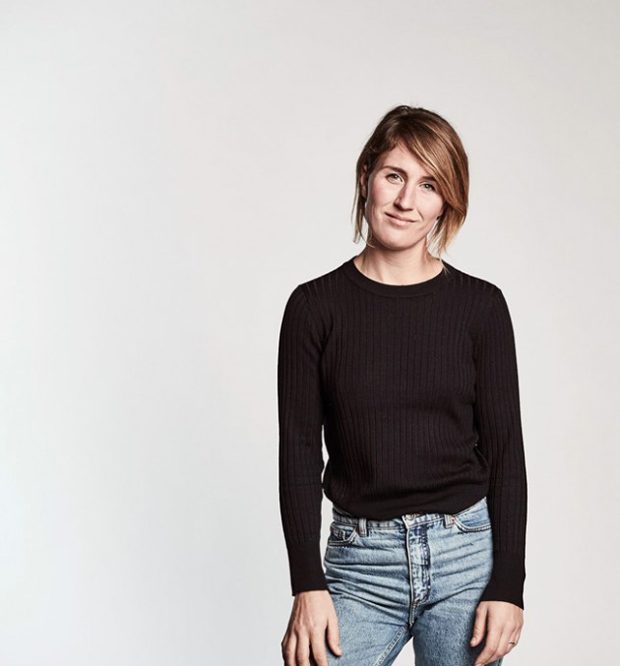