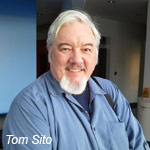 Just when you start to think the old rumors about hidden dirty jokes in Disney animated features have died down, they get passed on to a new generation. This was proven to me recently at an event I attended in which animation’s Renaissance man, Tom Sito, was speaking to a group of high school students. There probably isn’t a question relating to animation that Tom, a veteran animator, director, story artist, author, union leader and industry historian, cannot answer. But when the Q and A time came and the hands started to shoot up, one of the first questions raised was, What about those hidden dirty jokes in Disney movies?

Now, nobody can make the claim that such jokes don’t exist. One of the best goes all the way back to Pinocchio and involves Geppetto’s waking up in the morning. The gag moves too fast to be seen in real time, and cannot even be detected when run frame-by-frame. But when run in slo-mo—which was not possible in 1940, except through flipping animation drawings—it becomes clear that the wood cutter is coming down from a really great dream.

A similar gag allegedly existed in 1989’s The Little Mermaid, this time appearing to show the robed bishop who marries Ariel and Eric giving a whole new dimension to the term standing erect—allegedly, because it’s not a dirty gag at all, but rather a misunderstanding. And Tom Sito should know, since he animated the scene.

Tom related the story behind the scene to the kids in the abovementioned event, but I first heard it from him in 1996:

“In the original design, the bishop was this little, tiny man who had small little bandy legs, and who walked very slowly up to the podium. That scene got cut for time, so now you see him standing on a little soap box, and the protrusion you see is his knees. What happened is they put this very, very long robe in a straight line going down the side of his body, and the robe cuts off what would be visible of the legs and the feet, so all you see are his knees sticking out.” 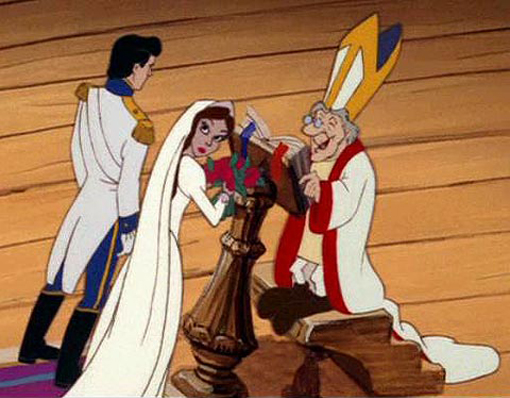 It should be noted, however, that Disney had the misunderstanding digitized out for the film’s 2006 DVD release…just in case.

Another legend referenced by the questioner was the rumor that Aladdin speaks the line: “Good teenagers…take off your clothes.” Tom similarly dismissed the notion that this was a deliberate prank, saying:

“Some people say it’s definitely there, but I don’t hear that. Anyway, that sequence was done in Florida, and the guy who animated it, Mark Henn, he’s real straight-laced. I mean, anything stronger than ‘shoot’ and the guy bristles.” 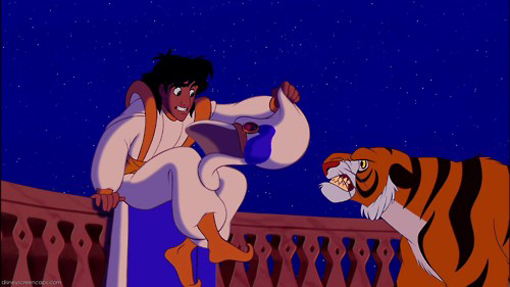 So what are some people hearing? The line is in the background and somewhat muffled, but it occurs in a scene in which Aladdin is being menaced by a tiger. I propose that the line is actually, “Good tiger…take off and go,” though for some reason, the word tiger comes out sounding like teegers.

Tiger; teeger…who knows? Maybe only Tigger has the real story.