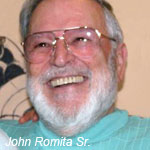 As everyone reading this knows, the San Diego ComicCon is taking place this week.  ComicCon is, among other things, the ultimate melding of the comic book, motion pictures and television industries, which these days are pretty darn simpatico.  But it was not always so.

In 2005 I spoke with legendary Marvel Comics artist and art director John Romita, who told me about the bad old days of the 1970s and 80s, when trying to appease skittish network executives often became a frustrating ordeal.  “I was constantly the voice of artistic integrity, and it generally got me nowhere,” Romita said.  “I used to tell them, “I’d rather not see it on the air than see it done wrong, and of course that landed like a lead balloon on people.” 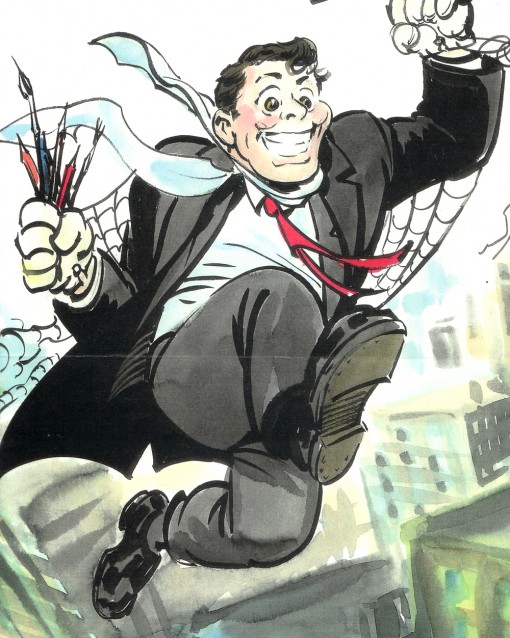 John Romita, rendered with Spidey powers by Marie Severin, in 1968

One perennial problem was Johnny “The Human Torch” Storm from The Fantastic Four. In the 1979 animated series The New Fantastic Four, the Human Torch was replaced by Herbie the Robot, designed by Jack Kirby. The Torch was also snuffed from 1981’s Spider-Man and His Amazing Friends. Plans originally called for Johnny Storm to team up with fellow super-teens Peter Parker and Bobby “Iceman” Drake, but NBC’s Saturday Morning brass were afraid that the kids watching at home would set themselves on fire, to emulate the Human Torch (emulate…immolate…it’s all the same to a network exec). A new character, first called Heatwave, and later Firestar, was created as a compromise. “When they said, ‘We’ll do a woman’, I said, ‘Okay, we’ll make her fly on hot air,’ ” Romita recalled, adding:

I went back to the office and came up with a costume for her, and put her in heat colors, yellow and red, and the edges of her gloves and boots were sort of ragged, like flames.  The only objection they [NBC] had to that was that it still suggested flames.  We ended up saying, ‘Suppose we airbrush it and have it look like the ends of her costume change from red on the end to yellow on the middle of her leg?’ I made her hair look as flame-like as I could. She ended up being a so-so character, but it was one of those stop-gap measures that we used to constantly have. 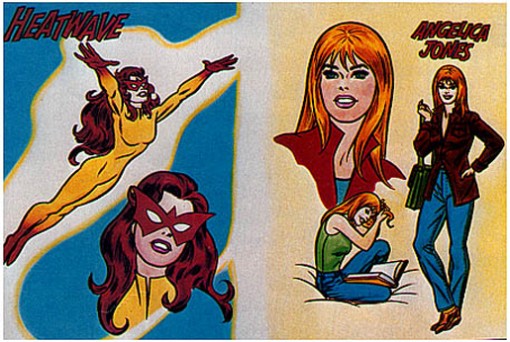 I remember we had a Daredevil prospect, and they wanted a seeing-eye dog.  He’s Daredevil!  He doesn’t need it!  But I had to do a presentation poster with Daredevil and the dog leaping out of a window.

Romita told me about another migraine for Marvel that did not involve a change of character, but rather a change of executives:

One of the worst things that ever happened to us was we got down to a Friday night where we had agreed on something, and everything looked like it was going to be okay on one of the new series. But by Monday there was a new head of Saturday Morning, and the whole thing went out the window!

Presumably, it was the same window that Daredevil and his dog leapt from.