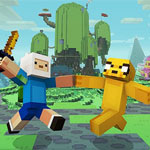 Cartoon Network and Mojang will be continuing the partnership that brought the popular Adventure Time Minecraft Mashup released earlier this year on console, PC and mobile: Cartoon Network Studios will be producing an original Minecraft episode of Penn Ward’s Emmy- and Peabody-winning animated series.

Titled “Diamonds and Lemons,” the episode will follow Finn and his friends as they experience setback and creative triumphs in a fantastic new vision of Ooo. The premiere is expected in summer 2018.

A special first-look will be presented to Adventure Time fans and the Minecraft community on Saturday, Nov. 18 during annual MINECON, which will begin streaming globally at noon EST at minecraft.net/minecon. The first look will also be available on Cartoon Network’s YouTube channel and social feeds immediately after MINECON.

Adventure Time is partway through its ninth and final season on Cartoon Network.