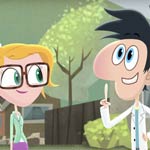 Turner’s animation-centric streaming service Boomerang is ringing in the new year with two series offering additions for January. Available now are every episode of Hanna-Barbera’s kid-sized Mystery Inc. adventures in A Pup Named Scooby-Doo!, which originally aired 1988-1991. And starting Jan. 11, subscribers can catch the first 26 episodes of the Cloudy with a Chance of Meatballs series, including never-before-seen episodes. The 2D toon is based on the hit Sony Pictures Animation movies and produced by SPA, Corus Ent. and DHX Media.

Boomerang premiere episodes of Cloudy with a Chance of Meatballs include:

“Hair We Go Again” – Flint invents the hair unbalder when he realizes he’ll go bald one day, but Tim offers him another point of view by showing him the perks of being bald.

“It’s About Time” – Sam and Flint accidentally cryogenically freeze themselves in the town’s time capsule and emerge into a post-apocalyptic future.

“Self-Helpie” – Flint invents a device that will put a good picture of him into the yearbook, but instead it puts him in every picture that has ever existed.

(And if you think you’re too cool to groove to the Pup Named Scooby-Doo theme song written by Tom Ruegger, you’re just lying to yourself.)