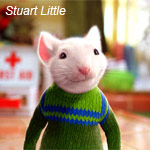 A few weeks ago, I wrote about a chat I had with Brendan Fraser regarding the fine art of acting on a set opposite characters that aren’t really there, but will be added later through animation. Whether the animation in question is a gigantic, towering robot, as in the case of the Transformers films, or a tiny rodent like Stuart Little, this particular skill is as much an element of a modern actor’s tool box as the ability to cry on cue.

But there is another side to this equation: not only do the live actors have to relate to nothing on the set, but the visual effects artists have to design and animate their creations based upon the emotions and reactions coming from the actors!

I mentioned Stuart Little just now for a good reason: back in 1999 I spoke with the effects team that brought the little guy to life for the film Stuart Little, led by senior visual effects supervisor John Dykstra. The effects in Stuart Little represented one of the first times a completely animated lead character had to be integrated with the supporting cast, with totally believable results. Dykstra told me how one actor in the picture rose to the occasion in terms of believability: 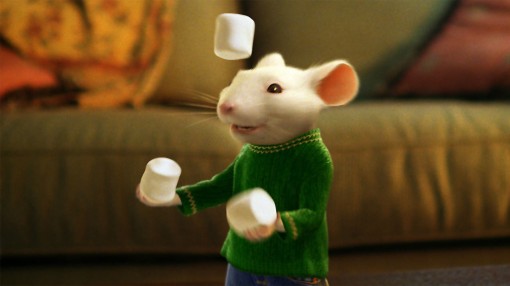 “When the actors were doing a scene they had to have an eye-liner in order to look at where the mouse was deliver their lines to him, and feel the emotions necessary to make the mouse, when he was finally integrated, be believable and communicative. They had a little laser that they pointed to wherever the mouse was, which the camera didn’t photograph because the laser was synchronized with the shutter. So these actors had a little red dot that they’d look at to deliver their lines. Of course, the first few days were kind of awkward, because they were used to having another actor against whom to play. After a while, however, after they went through the acclimation period we all went through, they got to the point where they treated Stuart as an entity.” 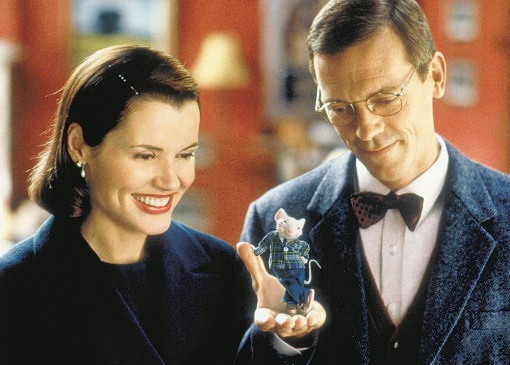 “Hugh Laurie was doing a scene in which he had to carry Stuart down the stairs and talk to him on the way down, and then set him down. Rob [Minkoff, the director of Stuart Little] tells the story about how when they were halfway through the scene, something went wrong, and he said, ‘Okay, cut.’ And Hugh, instead of dropping his hands to his side, actually went over and put the Stuart he was imagining holding on the ground as if it was the real thing. I thought that was pretty good if the actors were starting to treat this invisible entity as something that would be injured if you dropped your hand!”

In the time since then, of course, Laurie has gone from mouse to House, and not looked back. But given the speed with which digital imagery advances, and in an industry currently dominated by performance-capture, it would be shame to forget just how significant an innovation the creation of tiny, key-framed, Stuart Little really was.