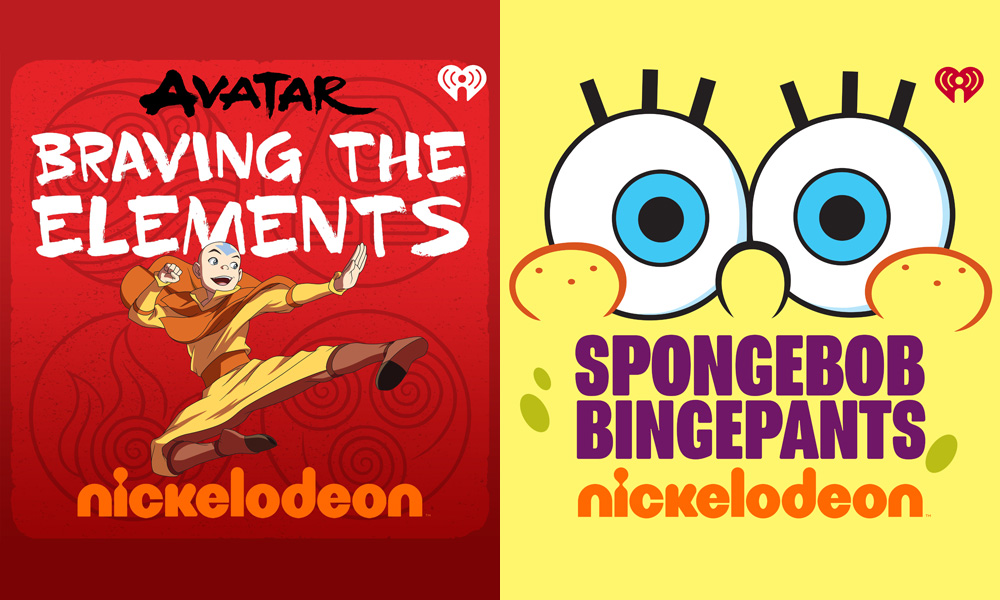 Nickelodeon, the number-one network for kids, and iHeartRadio, the No. 1 podcast publisher globally, are extending the worlds of Avatar: The Last Airbender and SpongeBob SquarePants with two original podcasts for loyal fans who grew up on the beloved franchises.

Hosted by original series voice actors Janet Varney (the voice of Korra) and Dante Basco (the voice of Prince Zuko), Avatar: Braving the Elements will explore the Avatarverse, while super-fans Frankie Grande and Hector Navarro will take fans down to Bikini Bottom with SpongeBob BingePants.

Co-produced by Nickelodeon and iHeartRadio, these companion podcasts will be available on iHeartRadio and wherever else podcasts are found starting this summer. The news was announced today during ViacomCBS’ presentation at the IAB Podcast Upfront.

“The family podcast market is still nascent, and we’re thrilled to be working closely with our good friends at iHeartRadio producing exciting new content for all audio platforms,” said Douglas Rosen, Senior Vice President, Strategy, Business Development and Digital Products, Nickelodeon. “Not only are we extending our beloved franchises and IP to the audio landscape, but we’re also working with creative talent to produce new ideas and concepts for all audiences.”

“We’re thrilled to be partnering with the team at Nickelodeon to bring such incredibly fun shows to audiences everywhere,” said Will Pearson, Chief Operating Officer of the iHeartPodcast Network. “I’m not sure you could pick two better franchises to kick things off, and there’s much more to come. We can’t wait for fans to hear these shows.”

Additional podcasts featuring beloved Nickelodeon titles from its library are currently in development and will be announced in the coming months.

Avatar: Braving the Elements (40 episodes, premieres Tuesday, June 22, 2021) – Enter the amazing world of Avatar through the official companion podcast from Nickelodeon. Join hosts Janet Varney (the voice of Korra) and Dante Basco (the voice of Prince Zuko) each week as they re-watch every episode of Avatar: The Last Airbender and break down key themes, notable battle and behind-the-scenes trivia. Special guests from cast members to producers join them to explore elements of the Avatarverse, including the origins of the story and how Avatar was brought to life.

“It’s very rare to get to work on something that is so deeply rewarding, rich, and ongoing as the Avatar-verse. I am so excited to be doing this new podcast with my wonderful friend Dante Basco where we’re going to be talking about all things Avatar-verse, starting with Season 1 of the Last Airbender, episode 1. We can’t wait to have everybody listen. It’s going to be a really fun ride.”
– Janet Varney
“For years, Avatar has been such a significant part of my career. It’s so special to go back and relive our stories and memories from this project as Janet and I explore the universe together. I’m looking forward to fans joining me on this journey as we uncover things we might have missed the first time around.”
– Dante Basco

“Like millions of fans around the world, I grew up with SpongeBob SquarePants and it didn’t take me long to realize he was *THE* cartoon icon of our time! It was an honor to get to host the Nick Animation Podcast and now I am beyond thrilled I get to co-host this amazing show all about revisiting Bikini Bottom, from the very beginning! ARE YA READY, KIDS???”
– Hector Navarro
“I think if there was another being on this earth who loves life as loudly and unapologetically as I do, it would have to be SpongeBob SquarePants, and so it is a great honor that I am co-hosting this podcast! I promise to make SpongeBob proud by bringing all the giggles, rainbows, joy and love I can to this exciting project. I’M READY!”
– Frankie Grande

Nickelodeon’s podcasts feature brand extensions of its hit franchises and original content. New series Avatar: Braving the Elements and SpongeBob BingePants join Listen Out Loud with The Loud House, The Casagrandes: Familia Sounds, Blue’s Clues & You!: Bedtime Stories and Nickelodeon Animation Podcast. These podcasts are available across iHeartRadio, Apple Podcasts, Spotify, YouTube and wherever podcasts are found. Avatar: Braving the Elements and SpongeBob BingePants are distributed by the iHeartPodcast Network.