As head writers go, Baboon Animation team member Carin Greenberg is one of the busiest in the biz. An Emmy winner and eight-time nominee, Carin has masterfully helmed such hits as 101 Dalmatians: The Series and Lalaloopsy, and has written for countless projects, including Nickelodeon’s Winx Club, PBS’s Angelina Ballerina and Disney Jr.’s Chuggington, Jungle Junction and Doc McStuffins.

Women in Animation’s wonderful Lisa Goldman (somehow) managed to catch up with her to talk about her career and her craft. — Mike de Seve

Goldman: Can we tawk?―What are your funniest or toughest moments being a woman writer in animation? As a story editor? In a writer’s room? As a writer working from home?

Greenburg: I can’t honestly say being a woman has had any bearing on my career. I’m a writer first, a disembodied creative mind, if you will, pulling ideas from the ether, or guiding and shaping the ideas of others. That said, most of the writers I’m story editing on Lalaloopsy, which is aimed at little girls, are comedy dudes from LA. For some reason, the masculine sensibility mixed with the feminine material makes for a good mix–keeps it funny without going too far into cutesy … hopefully!

My toughest gig was story editing 101 Dalmatians: The Series for Disney. Toughest first of all because it was my first-ever animation job–which is only a distant cousin of live action, which I’d been doing for seven years–and second because we had to produce 65 half hours in one year, roughly two and a half times the usual order. And this was before e-mails and Skype! I was talking to LA writers at two in the morning and falling asleep with piles of scripts on my chest. I’d sleep for six hours then wake up and continue editing those same scripts.

The hardest part of being a story editor is the unevenness. Even my best writers sometimes have an off outline or script, which means I have to rewrite it from scratch. And I’m like, “Really? You really submitted that?” I don’t actually say that. I am learning every day how to perfect my technique of giving criticism. I have a wonderful client right now who is so kind and polite when she gives criticism, and I try to emulate her. When I see an email from her beginning with “Unfortunately…” I know she’s going to give a very polite negative review.

Working at home is both awesome and horrible. I can stay up late and work in my pajamas. But some days I don’t even go outside. But the lack of exposure to sunlight has preserved my youthful skin tone far past its expiration date. I am like the undead.

Do you think about gender at all when you’re hiring writers?

Not really. I’m just looking for good ideas, and a sense of how to tell a story. I tend to get more usable submissions from male writers, but I don’t think that’s because they’re male. The best, most talented story editor I ever worked for was, and is, female, and one of my favorite writers on my current series is also female, as am I. I think talent has no gender.

Women In Animation was born because of the Boys’ Club. How has it impacted your career?

I don’t feel it has. I’m not especially intimidated by a group of guys around a table in a writers’ room. I’m pretty confident and have pretty thick skin. And I talk loud. There have been a few key people throughout my career who have taken a chance on me because they thought I could rise to the challenge. I really think it’s about talent, not gender.

Baboon Animation is a U.S.-based collective of Oscar-nominated, multi-Emmy-winning animation writers, with credits on dozens of the most iconic animated shows worldwide.

Lisa Goldman heads up the NYC Women in Animation Chapter; she also writes and creates content for all media platforms and teaches a course called Pitch Bible Studies Class. Learn more at animateddevelopment.blogspot.com. 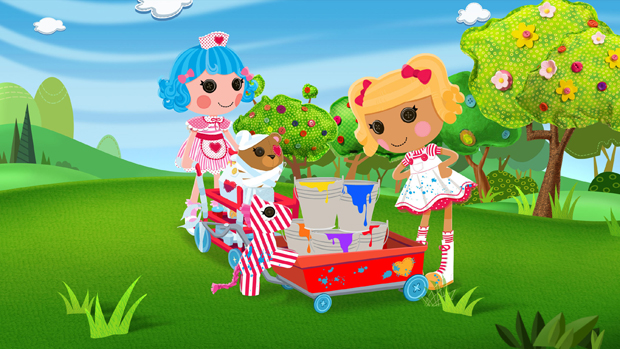