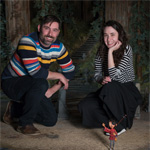 Since 2005, the internationally acclaimed studio LAIKA has been reinvigorating the stop-motion animated feature landscape in the US and around the world. The Portland, Oregon outfit has delivered four award-winning, Oscar-nominated films — Coraline (2009), ParaNorman (2012), The Boxtrolls (2014) and Kubo and the Two Strings (2016) — and has recently revealed its fifth project, Missing Link, coming in 2019. And with each title, studio head Travis Knight and his team of talented artists, craftspeople and technical whizzes have pushed the envelope in what the stop-motion medium can deliver with ever more ambitious blends of old-school skills and cutting edge technology.

This month, Animation Magazine was lucky to talk to two of these crucial team members — costumer Anja Poland and animator Ludovic Berardo — to learn more about how creativity and innovation combine to make LAIKA movie magic.

For Anja Poland, the niche specialty of costuming for stop-motion wasn’t something she’d planned on when studying Costume for Performance at the Arts University of Bournemouth (UK). Born in England and raised in Germany, she says her goal was to get into the film industry — “I was thinking human-sized costumes at that point, though!” 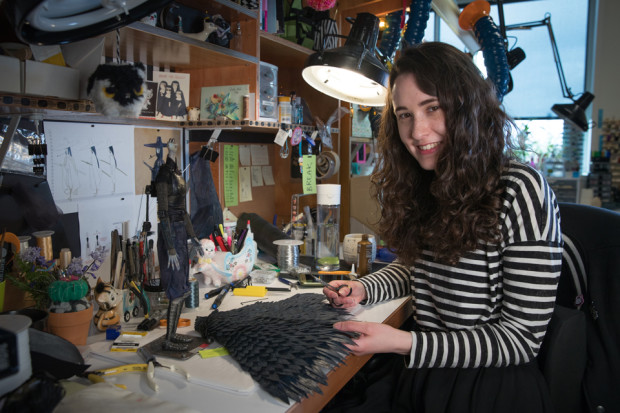 A chance to work on Tim Burton’s Frankenweenie feature was the deciding factor. “I am a huge fan of The Nightmare before Christmas, so I couldn’t pass up the opportunity,” Poland explains. “As it turned out, making tiny costumes was a perfect fit for me as I have always preferred a smaller scale and am very detail oriented. I’ve been fortunate enough to be involved in stop motion projects since then and I jumped at the chance when LAIKA was hiring for Kubo and the Two Strings.”

At LAIKA, Poland and the costume department begin their work with designs from costume designer Deborah Cook, dyeing and embellishing fabrics to match. The costumers also get input from the animation department on how each costume needs to “perform,” constructing it with the movement and posing requirements in mind. A less detailed mock-up is made for review by Cook, the director (in the case of Kubo, the director BAFTA winner and LAIKA CEO Travis Knight) and the animator(s), before a final version is crafted.

This process can take months for the often elaborate costumes — and Poland remains on call for on-set adjustments, special shot requests and maintenance. 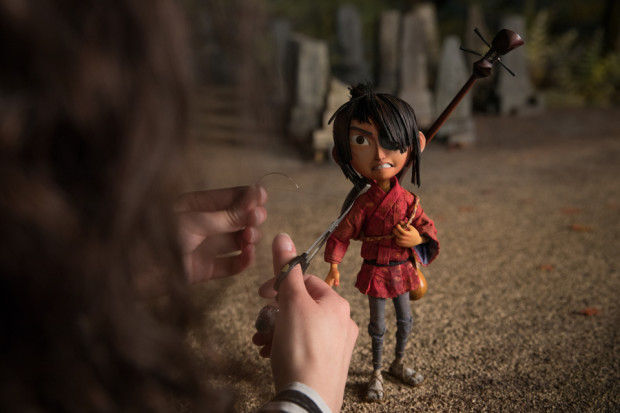 “It’s very much a collaborative effort across all departments, design and the visual development team,” says Poland. “Within the puppet department, it’s important that we work together across sub departments as every decision influences the next process. The angle a puppet shoulder is sculpted in, for example, can really change the way the sleeve of the costume looks. Or the fabric we choose may influence the choice of paint the paint department uses when they add detailing.”

Some of the particular costume challenges on Kubo were the plentiful kimonos with graphic folds, which made even background characters tricky. Tyvek — a durable, paper-like material — was used as costume backing. The team also developed a material called “Weighted Lining,” which uses metal powders to add weight and drape to looser fabrics. Poland also found herself tying teeny-tiny Japanese ornamental knots, with embroidery thread and tweezers.

Her costumer’s toolkit is also quite particular! “I use a mini quilter’s iron to iron costumes, and sometimes that is too big, so I have an even smaller iron attachment for a wax carver. If it needs to get even smaller, I heat up tweezers and iron with those.”

One of Kubo‘s most amazing costuming feats are the feathered, wind-whipped capes worn by the witchy twins known as The Sisters. The sinister siblings’ signature accessories (say that five times fast!) were both a crafting and an animation challenge. As Poland notes, the capes required collaboration between the costume and armature department, and are practically separate puppets. “They are mostly built from rigid materials, so it’s a departure from traditional costuming and I’m still amazed at how the animators managed to make them look so graceful and organic,” she adds. 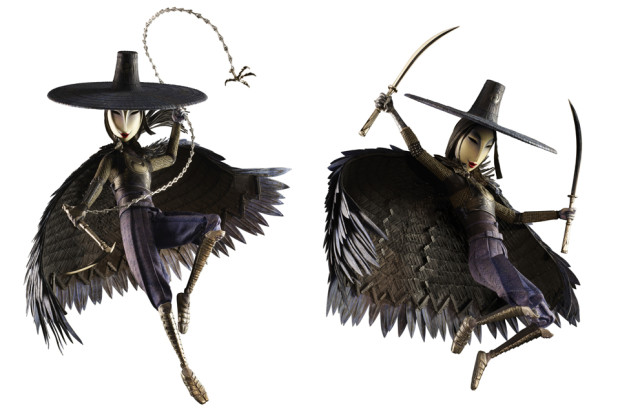 Like the costume department, animator Ludovic Berardo and his colleagues under animation supervisor Brad Schiff (part of LAIKA’s Oscar-nominated VFX team) begin each project checking over the puppets and scenes they will work with, going back and forth with the different puppet making departments (armature, silicone, costume, facial animation) and rigging department.

“With the Sisters … we had to establish first how the capes would move. So the costume builder would come up with a system that allows us to move the cape the way we wanted. It needed to be very organic, very alive, almost as a character in itself. When the cape was ready, we had to work with [Oliver Jones’] rigging department to find out how to support the cape in the air,” Berardo explains. “The hair was another kind of character in itself. With the hair department, we would test different ways to build the hair so they would look natural but they would also be able to hold the shape when animated … Since the Sisters fly, we also needed a rig to support them off the ground.” 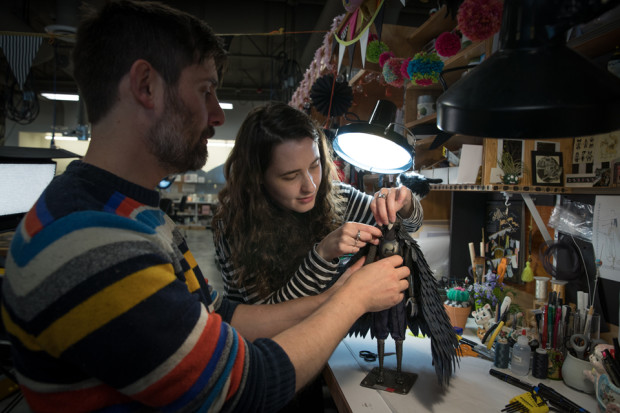 Despite their complexity, Poland shares that the Sisters are her favorite costume project yet: “I spent a lot of time applying feathers to capes (over 800 feathers in each cape) so I feel very invested, and I love their simple but ominous design. Also, I really want pants like theirs.” 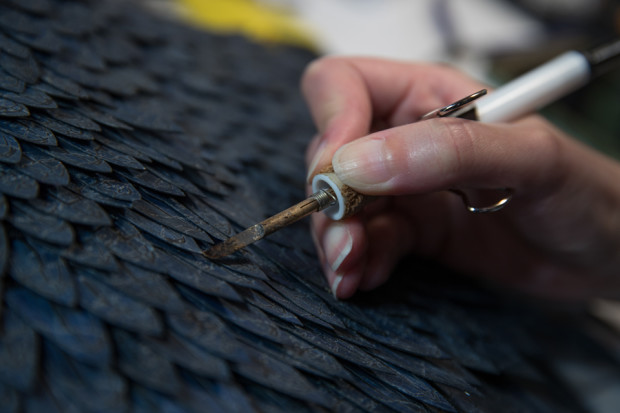 Originally from Belgium, Berardo first set out to follow his passion for illustration and comic books at ESA Saint-Luc Liège, before a friend turned him on to animation. He graduated and went on to the experimental animation program at ENSAV-La Cambre in Brussels with a focus on 2D — then another friend got him into stop-motion. After working on movies and shows around Europe, he joined LAIKA six years ago on the crew of ParaNorman. 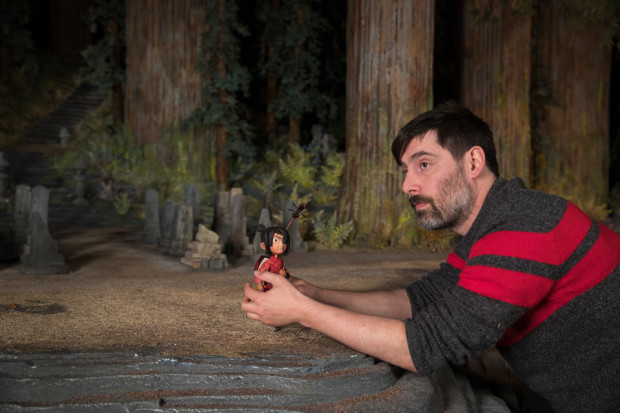 “In 2D, there’s no limit to your imagination, but it exists only in two dimensions. And that’s what I love so much about stop motion. I can touch my characters; move them around in their world, but in my dimension,” says Berardo. “And, I like to feel like a giant giving life to these beautiful puppets.”

Berardo explains that with all the hands-on attention required for stop-motion, assigning scenes at LAIKA is a bit like casting actors for a movie — each animator’s personality, skillset and vision for a character or moment affects their work. “Some animators are good at comedy scenes, some are better with action scenes, or emotional [scenes]. Therefore, we are assigned shots that best reflect our personality,” he notes. “But I would say that mostly we are versatile.”

On Kubo, for instance, Berardo became known as the “walk animator.” “I’m apparently good at it. Maybe because I’m tenacious. Walking a puppet is one of the most difficult and painful thing to animate,” he says. “And still to this day I’m often taken off my sequence to do a walking shot here and there.”

This rep was built by his work on a sequence in which Kubo, Monkey and Beetle are walking through the forest, across uneven ground. This seemingly simple promenade took more than six months to complete and was, Berardo says, “the most challenging thing I’ve ever done.” Understandably, he learned a lot during this time! 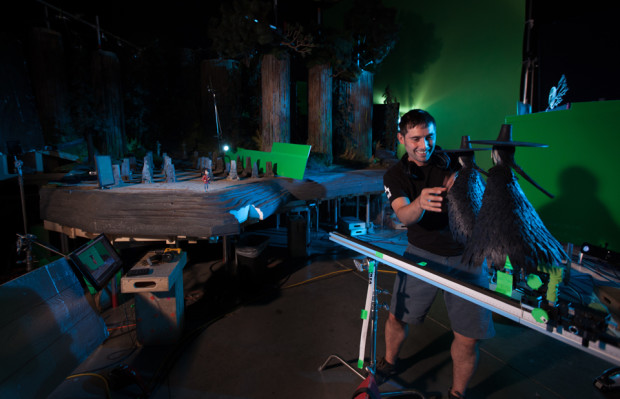 Berardo also had a close encounter with rogue technology during this shoot:

“The set was basically a corridor where the three characters Kubo, Beetle and Monkey walked towards the camera. The camera was programmed to travel backward. The motion-control rig is a huge, 10-foot high by 15-foot wide robot made of steel, basically shape like a ‘T’. It’s digitally programmed to follow a trajectory set up by the motion-control engineer. About to start the shot, I was posing the puppets and standing between the set and the huge robot. The camera assistant started to bring back the motion-control rig on the first position of the trajectory in order to start the shot. All of a sudden, caused by a glitch in the program, the 1,000 pounds robot, instead of moving backwards, raced towards me and the set.

“The assistant shouted at me, and instinctively I turned around, only just to see the monster coming at me. I stepped back in an instant and the rig went through my perfectly posed puppets, crushed them all to the ground and finished its deadly march into the wooden wall of the set, when the camera assistant pressed the emergency button. The puppets were safe and sound, but the set had to be partly rebuilt,” Berardo concludes. “I have now a new kind of respect for Sarah Connor when I watch Terminator.”

However, the forest walk is also Berardo’s favorite sequence that he’s worked on. “Despite the difficulty of that sequence, I felt myself serene in this magical set, surrounded by trees. A walk is a very repetitive movement and animating it

was kind of soothing,” he explains. “The sequence was very touching and I felt really close to these characters becoming family, especially when Beetle threw Kubo on his shoulders. That part was just pure emotion for me to animate.”

While those familiar with stop-motion have an understanding of the artistry (and arduous labor) that goes into making a quality feature, LAIKA has been at the forefront of sharing its work with the wider moviegoing public. As with each film the studio levels-up the creative and technical challenges, it also continues to build community engagement and appreciation for the thousands of minute artworks created for each film. The film industry is also taking notice — last year, Deborah Cook became the first Costume Designers Guild Award nominee for an animated feature.

“I think the accessibility of the ‘making-of’ featurettes and our LAIKA exhibitions, where people have been able to see the puppets for themselves, have made people more aware of the art form,” says Poland. “Being able to see the level of detail and craftsmanship in everything we make at LAIKA, as well as how small it all actually is, really helps audiences appreciate the extraordinary amount of work and patience that goes into crafting a stop-motion movie.”

Berardo points out that LAIKA’s unique, outside-Hollywood approach to storytelling is equally responsible for the studio’s success. “All the characters from LAIKA’s movies are so peculiar. LAIKA focuses on creating unusual stories that tickle your curiosity. [Our movies] pull you out of your comfort zone and bring you into a different kind of adventure,” he notes.

“I really like these characters that are sometimes annoying, sometimes weird, sometimes disgusting, but who are good-hearted. They are these people you kind of know about from your hometown but without really knowing them because they’re too unorthodox. It’s just interesting to animate unconventionally. Plus, obviously, the puppets are so amazingly well made and the sets are gorgeous.”