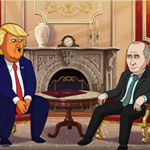 Showtime’s adult satirical show Our Cartoon President has had the tough challenge of presenting an animated version of the goings-on of the White House at a time when the real world is often more surreal and outrageous than anything fiction writers can come up. We had the chance to chat with the show’s co-creator/co-exec producer Tim Luecke, and animation directors Steve Conner and Mack Williams about the challenges of making such a topical animated show about real-life characters.

Animation Magazine: OK, so let’s start from the beginning. Take us back to the origins of the show.
Tim Luecke: In the spring of 2016, we began doing live animated conversations with then-candidate Donald Trump on The Late Show. We thought it would be a flash-in-the-pan segment that would go away as soon as Donald Trump did. Unfortunately, during our 2016 live Election Night special (which featured an animated Trump origin story) … we found ourselves in a world where Donald Trump had become president. So, Stephen Colbert, Late Show executive producer Chris Licht, Late Show writer/producer Matt Lappin and I developed a pitch for an series that would go behind-the-scenes of history’s most cartoonish White House.

What attracted you to this project?
Tim: I felt like it was the best way to serve my country in these unprecedented times.
Steve Conner: It’s done in New York and it pokes fun at the current administration. Building a show from the ground up is the most fun and challenging part of the process.
Mack Williams: Getting to know a new show and being in the pipeline of a new program.

How do you keep the humor topical and timely, given how amazingly fast news breaks and the political landscape changes these days?
Tim: We knew our pipeline had to be nimble, so we created an Adobe Character Animator digital puppet library that allows us to turn around topical cold open segments just days before each episode airs.
Mack: Using Character Animator lets us crank out things quickly. Luckily we haven’t had a dire emergency where someone [in the Trump Administration] got fired before one of the episodes has aired.

What do you like/dislike about that software?
Tim: As with any new software, there is a learning curve to figure out the most efficient way to use it. Because we were on such an accelerated schedule, we had to do a lot of that learning on the job.
Steve: Rigging a puppet and making sure it works properly is a hump, but once you’ve gotten over it you can animate very quickly. That helps us keep on schedule. Revisions can be a little tricky, but the pace we can achieve a first pass is excellent.
Mack: It’s built for live performance —you’re able to reuse your characters and actions.

What other animation technology do you use?
Tim: After the success of the The Late Show segments, we set out to build a pipeline that allows us to produce at a very accelerated pace. In addition to using Character Animator to plow through dialogue-heavy scenes, we rely on traditional hand drawn and After Effects puppet animation.
Mack: Most of the drawn animation is done in Photoshop — sometimes roughs are done in Flash.
Steve: Character Animator handles the bulk of the workload, but for trickier shots we lean on After Effects.

What is the ballpark cost of the production per episode?
Tim: The emotional cost of having to think about Donald Trump and his administration every day has been high.

How long does it take to make an episode?
Tim: It takes about 14 weeks from completed script to delivery.

What would you say is the biggest challenge involved in making the animated series?
Tim: We had to assemble a team, build a studio, and execute 10 episodes in a whirlwind nine months. We went from one animator to a production team of 100. I’d like to think we did a better job of staffing up than the current White House has done.
Steve: The fast production pace and dealing with news cycles are the biggest challenges.
Mack: Figuring out how to turn a segment into a 30 minute show. And using software that’s never been used this way before.

Where do you see the future of animation in five or 10 years even?
Tim: Hopefully there won’t need to be a cartoon show about Donald Trump.
Mack: Streaming services, websites and cable are racing to produce more content. There will be more opportunities to fill that demand.

Some say that the reality of this presidency is funnier and more surreal than anything fiction or animation can come up… What is your take on it?
Tim: I’m just happy that President Trump is bringing animation jobs back to America.

What’s your favorite thing about the show?
Tim: Knowing that Ted Cruz has probably watched every episode.
Mack: I love all the talented voice actors.

What makes this show unique in terms of content and process?
Tim: We’re making a full-blown animated series about actual people who are impacting our country each day. It’s like trying to animate the first draft of history. This means we’re never done tweaking until an episode is delivered. We may be a scripted animated series, but there’s still a lot of late-night talk show DNA in our process.

Check out the show’s take on the Trump-Putin summit here.

You can watch all 12 episodes of the first season of Our Cartoon President on the sho.com page. 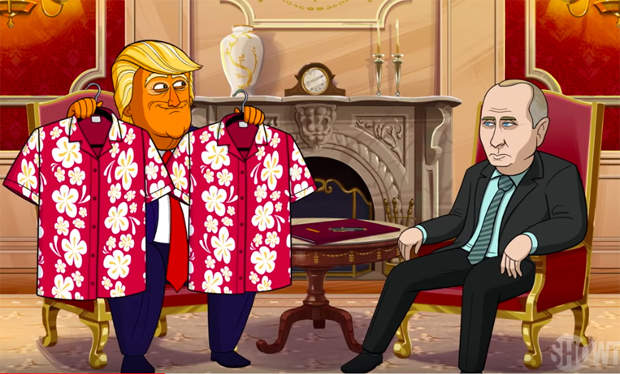 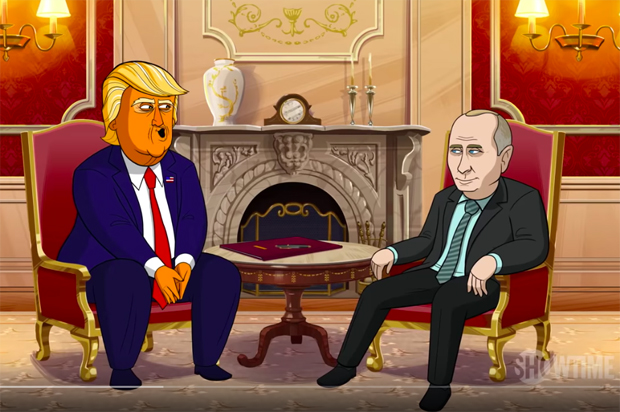 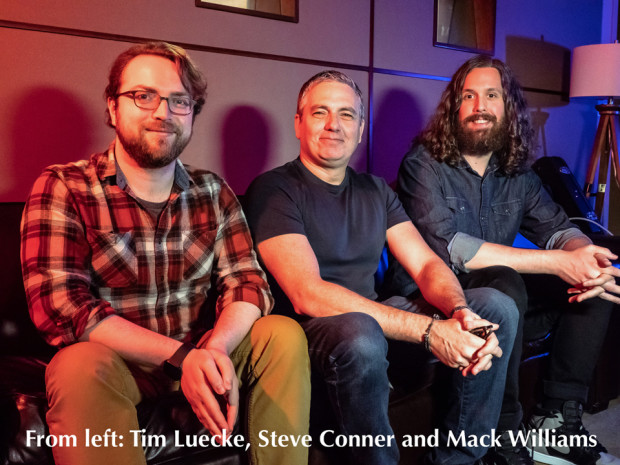