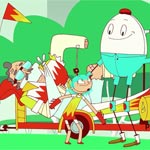 Some fresh high-energy adventure is coming to streaming to Amazon Prime Video viewers in the US and UK with the launch of Amazon Original Kids Series Danger & Eggs set for June 30. Created by Yo Gabba Gabba animation colleagues Mike Owens and Shadi Petosky — who also executive produce with Chris Hardwick (Talking Dead, @midgnight) — Danger & Eggs is the Amazon Studios’ first comedy toon aimed at kids 6-11, according to Head of Kids Programming Tara Sorensen.

“I’ve been passionate about animation my whole life and to produce this series with my animation company [Puny Entertainment] fulfills a lifelong goal,” said Hardwick. “This show is funny, touching, and has incredible design — everything I’ve wanted to make.”

Danger & Eggs follows the endless adventures of a fearless, teal-haired girl named D.D. Danger and her ever cautious best friend, a giant talking egg named Phillip. As the daughter of world-renowned stunt daredevil, Roy Danger, D.D. is following in his footsteps and is always chasing her next big thrill. Luckily for her, Phillip is always there by her side with jerry-rigged safety mechanisms to make her thrill-seeking dreams come true. Together, they go in search of new adventures at their favorite spot, Chicken Paw Park, which is home to Philip’s mom Becky, a gargantuan chicken. The first season finds D.D. and Phillip meeting a raccoon with a thirst for technology, being sucked into a mysterious underground science lab, discovering a lonely robot in an overgrown garden, and taking on a famous zip line. Throughout their journey, they overcome obstacles with the “Buddy System” because even though they are polar opposites, their differences complement each other’s strengths and weaknesses to solve problems. Their Buddy System mantra says it all: “You look out for me and I’ll look out for you!”

“For us, the heart of Danger & Eggs is the friendship between Phillip and D.D. that proves you can face fear and danger and have a blast in the process because you are not alone,” said Owens. Petosky added: “We can’t believe we get to take out our anxiety on a show–putting our inside voices into these characters and seeing if they stay friends.” 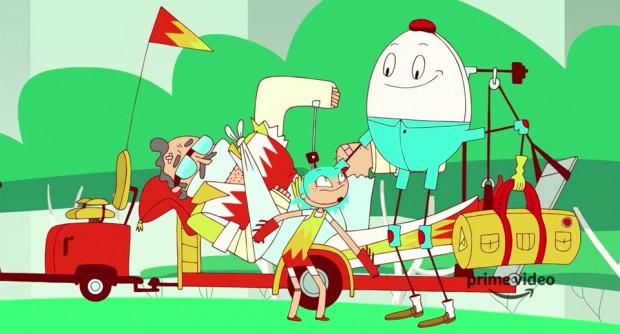