A new Amazon Video pilot season kicks off on June 17 in the US, UK, Germany, Austria and Japan. And this year’s crop includes five new kids’ animation series to keep an eye on: Little Big Awesome, Morris and the Cow, Toasty Tales, The Curious Kitty and Friends and Jazz Duck. (There’s also a live-action project from Sid & Marty Krofft: Sigmund and the Sea Monsters.)

Little Big Awesome (kids 6-11) combines 2D animation, puppetry, and live-action footage to create the whimsically weird world of Ballopolis. The show follows Gluko, a jelly giant, and Lennon, a small kid-like creature with a fuzzy hat, who are inseparable buddies. They adventure through a universe where sea turtles fly, flowers talk, and tear drops splash around on a hot summer day. Gluko and Lennon’s desire to help those around them can, at times, lead them to epically outlandish places, but at the end of the day, this show is about two best buds making their own fun and enjoying the wonderfully strange world around them. Created by Tomas Dieguez (TRONCO), written by Ben Gruber (SpongeBob SquarePants and SuperJail), and animated by Emmy award winning studio Titmouse (Randy Cunningham and Metalocalypse).

Toasty Tales (kids 6-11) stars Waffle, Burger and Pants– three best friends who happen to be Marshmallows living in the long forgotten Move-Along National Park. Every day is a new adventure filled with strange creatures, perilous excursions, and epic tomfoolery, always served with a side of pancakes, hot off the griddle! Together, the trio explore the mysteries of Move-Along, and spin tall tales that maybe…just maybe…. have a hint of truth. Created by Thomas Borowski and Caroline Foley (Rick and Morty, Robot Chicken), written by Merriwether Williams (SpongeBob SquarePants, Adventure Time), and animated by Stoopid Buddy Stoodios (Robot Chicken).

The Curious Kitty and Friends (preschool) is a stop-motion animated show that follows the upbeat and colorful adventures of kitty cat Komaneko as she explores the wonderful world with her friends Mimmi Bear, Radibo and Yeti. With her trusty video camera and knapsack in tow, creative and curious Komaneko makes her own movies, usually starring her two favorite dolls, Wink and Ink. This playful show is produced by Dwarf Studios and comes from the mind of Tsuneo Goda, the creator and director of the world-famous DOMO among other numerous characters and award-winning films and series. The talent also includes recognized lead animator Hiro Minegishi, music by Kevin Kiner (Star Wars Rebels, Jane the Virgin) and script by Kent Redeker (Doc McStuffins, Special Agent Oso).

Jazz Duck (preschool) encourages young viewers to listen and express themselves as they explore the sounds and musical potential of their world! Jazz Duck is part duck, part saxophone, and loads of physical fun. With the friendship of the Narrator and his animal friends, he embarks on adventures through the noisy Big City that culminate in a musical jam. Created by Tom Jobbins, co-directing with Mark Perrett, the show is animated by award-winning studio Nexus Productions and features a kid-filled voice cast including Myla Beau, Britain Dalton, Tony Espinosa, Aiden Ledowski, and Ava Priestley with saxophonist Ross Hughes as Jazz Duck. 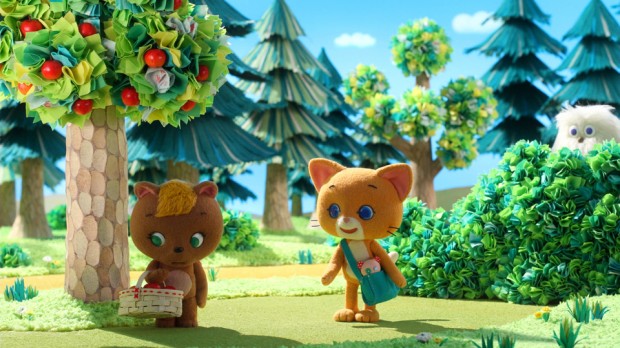