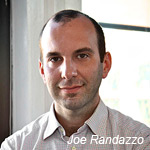 “This is a unique opportunity for us to create something totally new and original that is very much a product of the digital age,” said creative director Randazzo. “The content we’re making for Thing X is kind of insane. It’s going to be unlike anything else out there.”